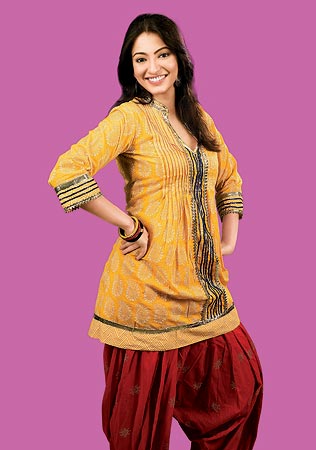 Television stars usually aspire to act in films but for Anjori Alagh, it's the other way round.

The actress, who has acted in films Life Mein Kabhi Kabhiee and 1920, is making her TV debut with Seeta Aur Geeta, adapted from the hit film of the same name.

Rajul Hegde caught up with Anjori, who also happens to be the daughter of character actress Maya Alagh, for more.

How did you bag this role?

I got a call from the production house and they told me that they were remaking Seeta Aur Geeta into a TV show. They asked me whether I would be interested in giving an audition. It would have been silly on my part not to go. So I went for the audition, and got selected.

Wasn't it a step down for you to go from films to television?

It would have been a step down if it were something like a saas bahu or regular soap. But this is a remake of a film. Plus, I have a double role which gives me a chance to showcase my talent. An opportunity like this is very different from doing a regular TV show. So I don't think it is a step down. If people like my work, it will be a step up.

How did you prepare for this role?

Though I have seen the film several times, I watched it again to learn the nuances of Hemaji (Malini). We did a number of workshops, sat with the director and worked on the character and scenes. We have put a lot of effort into creating a contrast.

The basic foundation of the show is the same because we bought the rights. But obviously converting a film of three hours into a TV gives us a certain amount of creative liberty.

'Sometimes I felt like I was living three lives -- Seeta, Geeta and Anjori's' 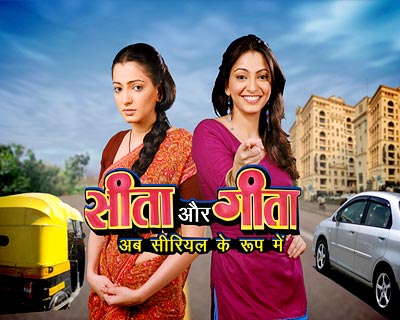 I think I am more like Geeta because I am constantly smiling and full of life. I'm very mufat. At the same time, I am family-oriented and can be very peaceful. So I am a bit of both.

But I loved playing Geeta more because she's fun.

How was the look decided?

We tried experimenting with different looks. Seeta is very simple and submissive so we didn't try much on her character, except for a sari. We tried many looks for Geeta and finally settled on today's girl. Viewers will identify with her.

Is it difficult to play a double role?

It's not easy. Sometimes I felt like I was living three lives -- Seeta, Geeta and Anjori's!

How did your mother react when you told her about the show?

She was very excited and happy that I got an opportunity to play this role. She told me that there is lot of hard work involved and advised me to pay attention to the smallest of details.

'No one can ever replace Hemaji' 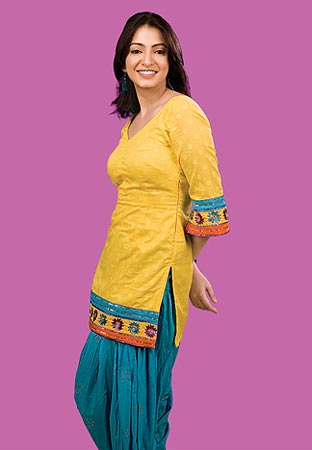 Are you nervous because there will be a lot of comparison?

I know there will be a lot of comparison but I am more excited than nervous. I have put my heart and soul into this show. To be honest, I don't think I have ever worked this hard. But I am loving every second of it.

No one can ever replace Hemaji. It's a matter of pride and as well as a challenge for me to play this role. I hope I do justice to my character.

What happened to your film career after Life Mein Kabhi Kabhiee and 1920?

I started working on two projects. But the timing was bad and they were put on hold. Meanwhile, Seeta Aur Geeta came up, so I grabbed it. Films will take a backseat until the end of the year.

How long will this show run?

'I didn't know Mouni had been approached for this role' 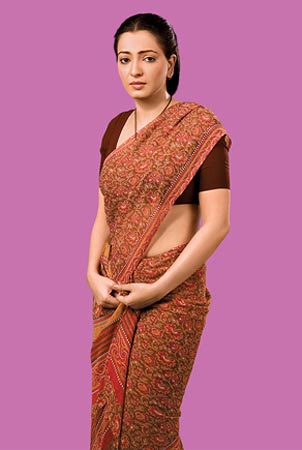 What is your other passion apart from acting?

I have great passion for interiors and at some point in my life, I will take it up seriously. I love painting too. I love playing basketball but I don't have place to play in this city, which is very annoying.

Mouni Roy was initially approached to play this role.

When I went for the audition, I didn't know Mouni had been approached. I read about it after I got the role.

The buzz is that you got this role because of your brother-in-law Sameer Nair, the CEO of NDTV Imagine.

Absolutely not. If my brother-in-law were to give me a role, he would have done it when he was the boss in Star. I think everybody should trust the fact that he is a thorough professional and doesn't take decisions by himself. He had no idea that I auditioned for the role till [producer] Sunil Bohra called and told him.

From among your male leads -- Cezzane Khan and Gaurav Dixit -- who is more fun to work with?

Both are very professional. Cezzane was nice enough to sit and read the lines and even gave me a few tips while Gaurav and I got along like a house on fire. I'd be laughing all the time because he is so funny.

'I am supporting Kings XI' 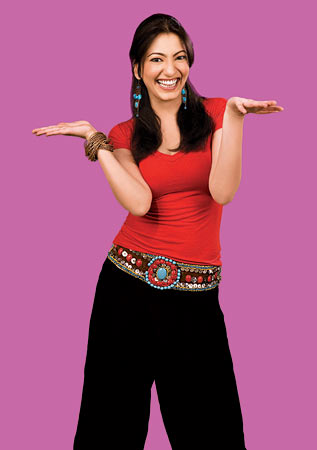 What do you love to watch on TV?

I like watching cricket. I am missing the Indian Premier League because of my shoots. I am supporting Kings XI because Sreesanth and Irfan Pathan are my favourite players. They played well last year and hope they will win this year.

What do you think of Rakhi Ka Swayamvar?

I am dying to see the contestants and what she will do to them. Rakhi is fun, entertaining and full of masala. It will be fabulous to see what she does to those bechare bridegrooms.

Seeta Aur Geeta starts on May 25, Monday to Friday on NDTV Imagine at 7.30 pm.