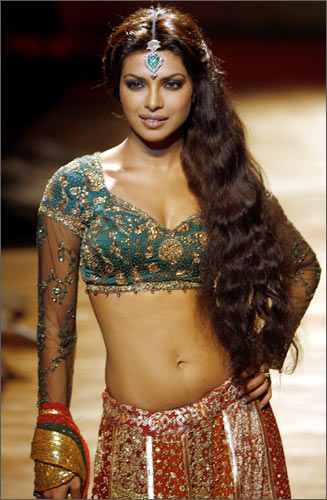 After impressing us with her acting chops in Fashion and Dostana, Priyanka Chopra is gearing up for another round of applause with Jugal Hansraj's film Pyaar Impossible.

The Yash Raj film, which has been written by Uday Chopra (he also stars in it) went on floors last month while its website was launched on Tuesday by Priyanka. The actress had a lot to say about Pyaar Impossible during the launch. She also spoke about falling in love and her forthcoming movies.

The website is called www.pyaarimpossible.in and has all the details about the movie, behind the scenes action, videos and photographs. It will be updated regularly.

I don't know how much it will help the film but I am sure that it will increase the curiosity factor for the film, as we have behind the scene shots.

'Looks should not be the criteria for being with someone' 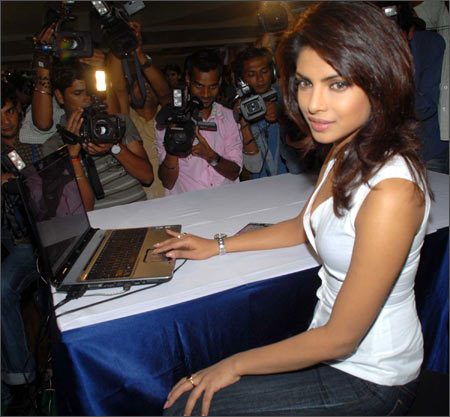 It is a romantic comedy about a beautiful girl and a geek and their impossible pyaar. Uday Chopra plays Abhay, who thinks he is not good enough for the girl he loves. The story is told from his point of view.

I play the Alisha, a very beautiful girl. Dino Morea also stars in the film.

Do you think beauty actually matters?

I know a lot of people who have dated the most beautiful looking men and women but somehow they end up extremely heartbroken. Looks should not be the criteria for being with someone. If they look good, then it is bonus, otherwise it shouldn't matter. In the end, it is how that person makes you feel that matters. 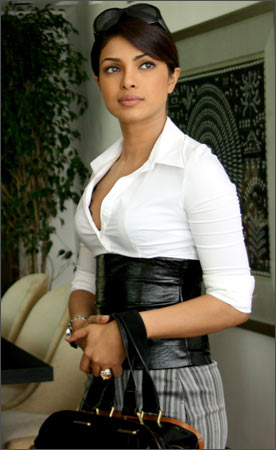 Is it true that the movie is inspired by the Hollywood film Notting Hill?

No, it is not true. The only similarity that Notting Hill and Pyaar Impossible has is the geek and beauty factor. In Notting Hill Julia Roberts plays a superstar but I don't play one here.

The other point of similarity is the fact that the girl he loves is someone who is out of his league.

What made you say yes to the film?

I loved the script and am very excited about it. I know this film will be shot well. Music by Salim-Suleiman is wonderful too. The story is very heart-warming and everyone will be able to relate to it.

'I was a major geek' 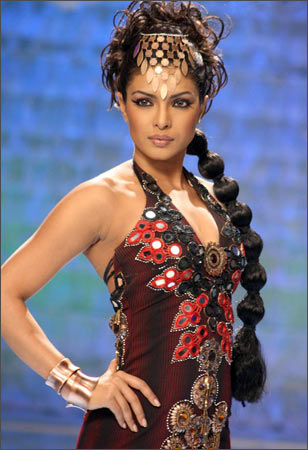 Do you know of any geek in real life?

I was one! I was a major geek when I was in the eight standard in America. I could not speak to anyone. If I have to go from one class to another, I would hide and and go. I would pretend that I'm invisible. I had a crush on this boy but every time he came towards me, I would become very uncomfortable.

We have seen you in a glamorous avatar in Fashion as well as Dostana. Will we see you in a glam role here too?

It will be a different kind of glam role since it is a romantic comedy.

'I have not found the right person yet' 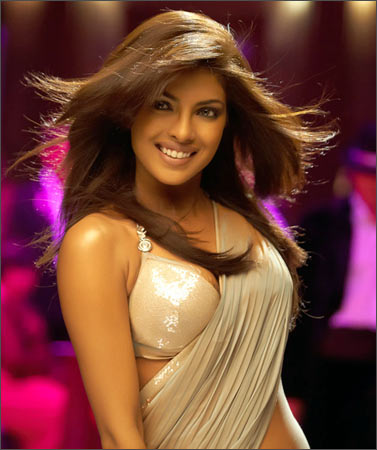 You said there are a few similarities between the film and your personal life. What are they?

If I tell you, I'll give the story away. All I can tell you is that you will be able to relate to it.

Do you think Pyaar is actually impossible?

I don't think Pyaar is impossible for anybody. You just have to find the right person. It is something very private for me. When I find the person that I want to spend the rest of my life with, I will shout it out from the rooftops.

So you have not found anyone yet?

'Romance is a big thing for me' 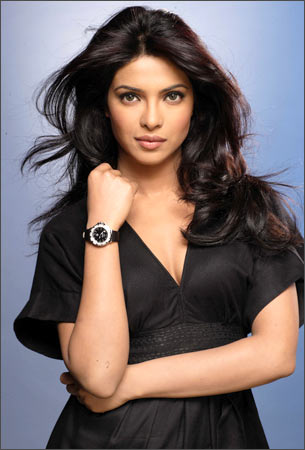 How important is love to you?

Love is very important to me. To me, the definition of love is not just about loving your boyfriend or your husband, you can love your friend, your parents, your family, your colleagues. So when somebody says that the world makes the love go round, I believe that. I am a Cancerian  I believe in love a lot. Romance is a big thing for me. People are lucky if they fall in love, even if it is for some time.

You have been so successful in the industry. Yet, you're doing a film with Yash Raj Films after so long.

We have met for many films but whenever they have offered me a film, either I did not like or they did not like the script. So it has never worked out somehow. I am glad it happened with Pyaar Impossible. It's a very sweet believable film.

'For me all my films are Mughal-e-Azam' 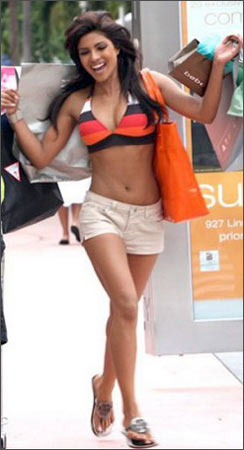 Are you doing this film because it is a big banner?

If that was the reason, I would have done the other Yash Raj films that were offered to me. But I never do a film for any actor or banner or director. If you see my past record, I have worked with new directors, producers and actors. For me, when I read a film, I have to feel like I want to be part of it. For me all my films are Mughal-e-Azam whether is Drona or Dostana. All my film are very big deal for me.

Is it true that John has a cameo in this film?

Not that I know of.

'I think the film will have more of Uday' 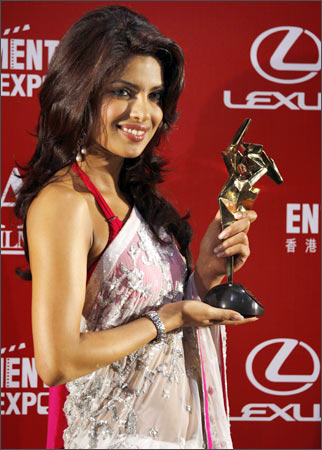 Image: Priyanka Chopra
Photographs: Bobby Yip/Reuters
You have always worked with good looking stars. This is the first time you're working with Uday Chopra, not quite in the top league yet. Do you think the chemistry will work?

If our characters turn out to be believable and people start relating to them, yes. I don't think this chemistry has something to do with me -- I always put the same effort in all my films. This film is Uday's baby, as he has written the script. I have not known Uday long but when I met him, I liked him. It's been great interacting with him.

Will Pyaar Impossible have you in the spotlight?

I don't think so because it is a romantic film. It needs both its hero and heroine. The film itself will be the centre of attraction, as it is a different kind of film. The story and casting is unusual. In fact, I think it will have more of Uday, as he has written the script. So he will get more credit -- good or bad. Image: Priyanka Chopra
Photographs: Shamsuddin/SnapsIndia
What about your own website or blog?

I think website is more interesting then a blog. Blogs don't impress me, as I find them less interactive. Blog are a one-way relation. I am working on my own website, which should be online in couple of months. I want it to be more interactive, as I want audience feedback.

Why don't you blog like Amitabh Bachchan and Aamir Khan?

'I don't think Kaminey needs anyone else's help for promotion' 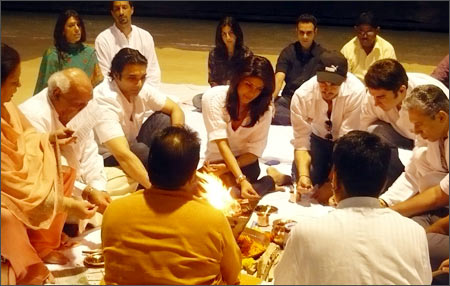 Image: On the sets of Pyaar Impossible

Do you think a film like this will be accepted?

Indian film is going through a metamorphosis, where different kinds of film are being accepted by people. People like films without a hero or heroine like A Wednesday. Fashion was a different kind of film, not the typical love story about parental objection and five songs.

Do you think Yash Raj is making this film to revive Uday's career?

I would say Uday has written this film for me.

On a different note, Kareena commented that Shahid Kapur and you are using her for the promotion of your film, Kaminey. What do you have to say about that?

Kaminey is a very nice film. It has been directed by Vishal Bhardwaj, who is a fantastic filmmaker. It has been produced by UTV; their track record has been great. Shahid plays a double role in the film. I play a Maharashtrian woman. I don't think Kaminey needs anyone else's help for promotion, besides the team.

There's buzz that you have signed a film with Ranbir.

Yes, I have signed a film with him, to be directed by Siddharth Anand (of Salaam Namaste fame).