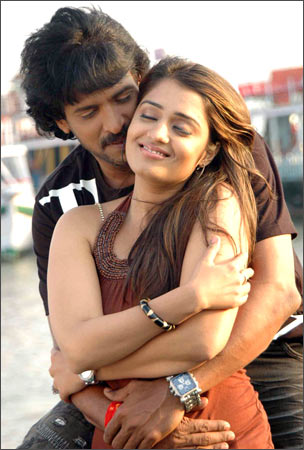 With big successes (Budhdhivantha and Junglee) behind them, "Real Star" Upendra and "Action hero" Vijay are two of the top heroes in the Kannada film industry.

With Dubai Babu and Taakat releasing this Friday, it is time for them to consolidate their position.

Though Budhdhivantha was a bigger hit, the fact that Vijay's Junglee succeeded at a time when the entire industry was facing recession makes it imperative that there would be an interesting contest for top honours this week. 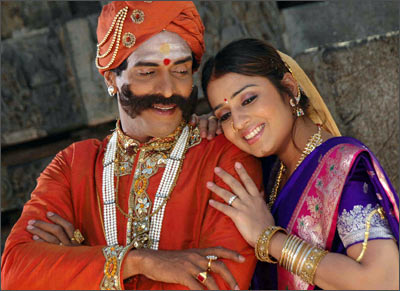 Image: A scene from Dubai Babu

Dubai Babu is the remake of the Telugu hit Dubai Seenu that starred Ravi Teja and Nayantara. Upendra and Nikitha will team up in production of Shylendra Babu.

Naganna who had delivered some big hits with Upendra like Kutumba, Gokarna and Gowramma is the director.

"We have taken only the story line from the Telugu original, so you would see a completely new film now. The song compositions are different, picturisation of songs will be fresh and even the narration has undergone some changes. Upendra will keep the audience in splits. Established comedy artists like Dwarakish, Sadhu Kokila, Tennis Krishna, Sundar Raj, M S Umesh have also done an excellent job. Even the actors who play the villain's role in the film will evoke laughter in the theatres. It will be a non- stop laugh riot," assured director Naganna.

The film's heroine Nikitha said that she was extremely apprehensive when she signed up the project. "I heard that Upendra was a thinking actor and he had set his own benchmarks for his films. But I must say working with Uppi sir was a great learning experience. He would help me in improving my performance and expressions. Director Naganna sir is a cool customer," said Nikitha. 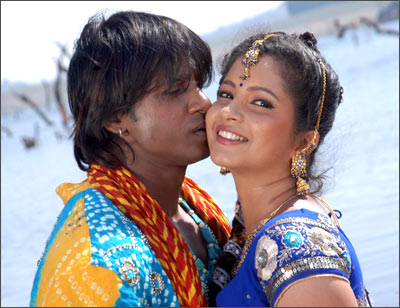 Image: A scene from Taakat

Taakat is directed by writer-director M S Ramesh who has made several films with stars like Shivaraj Kumar, Sudeep, Darshan and youngsters like Vijaya Raghavendra.

He is teamed up with Vijay for the first time. Ramesh is also co-producing the film with BV Pramod and Rajashekhara Naidu.

Vijay is paired with Shubha Poonja.

Ramesh said that Taakat was an interesting love story set against a rural backdrop. "We know very well the expectations of Vijay's fans. We have lot of scope for action in the film. Vijay and Shubha Poonja make a good pair. I have always trusted Guru Kiranji for the music and he has always delivered best of songs for my films. Guru's work in Taakat would be a highlight. We have done a song on Dussera. I am sure this song will be as popular as the Karulina Kare song of Dr Raj Kumar," said MS Ramesh. 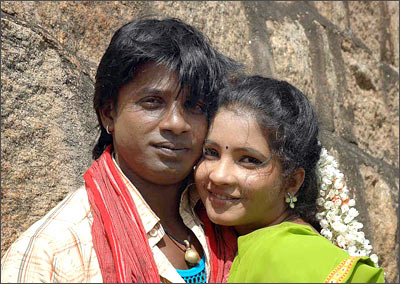 Image: A scene from Taakat

Shubha Poonja plays a village belle in the film. "I look glamorous only in songs," she said.