'I couldn't recognise myself in the wig and bindi' 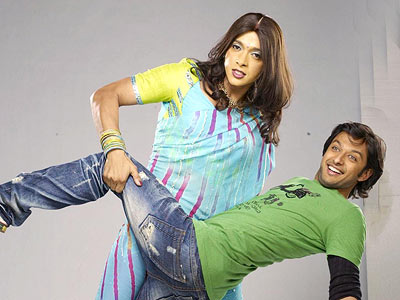 We've seen how actors love to experiment. As if to make sure he's not left behind, Shreyas Talpade took off his jeans and put on a sari for his new film, Paying Guest. Also starring Celina Jaitley, Javed Jaferri, Aashish Chowdhary, Vatsal Seth, Riya Sen, Neha Dhupia, Sayali Bhagat, Johnny Lever and Delnaz Paul, the film is expected to be a laugh riot. Directed by Paritosh Painter, Paying Guest will hit the theatres as soon as the strike is called off.

Shreyas spoke to Patcy N and talked about how difficult it is to play a woman.

Tell us about Paying Guest.

It's a fun film --  an over-the-top slapstick comedy about four friends who are thrown out from their houses and jobs. In the process of finding a house, they have to do many things -- including becoming a woman and telling lies.

I play a cook. I've played a cook before in Bombay to Bangkok. I'm employed by Johnny Lever, an absent-minded person. He throws me out of the job after a tiff and after that, I pretend to be a woman and stay in his house as a paying guest. So when people ask me who I am paired opposite, I say I'm paired opposite Celina and Aashish Choudhary!

'Wearing ghagaras and saris are tough!' 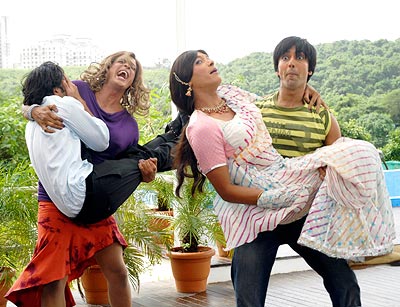 You're looking gorgeous in a woman's get-up.

I should thank our make-up team. If they have made a boy like me look gorgeous, they have done a wonderful job! But it goes beyond costumes, bangles and bindi. Pari helped me with the body language. I have made many observations about women, and have used that as well.

How did you carry out your costumes?

It was really tough. We keep saying heroines take so much time to get ready but here, I would take about two and a half hours to get ready. Wearing ghagaras and saris are tough! Thumbs up to the heroines of our industry. If they get late in getting ready, I will not complain from now on.

What was the first reaction when you stepped out of your make-up van in a woman's clothes?

It was torture! All the crew members started whistling, some started pinching and tickling me! I felt trapped. And to think that was only the first day of the shoot, and there were 40 more days to go! But it was good fun; we had our moments. Of course, I don't think I will dress like a woman for any film for the next two years.

'It was a funny but superb experience' 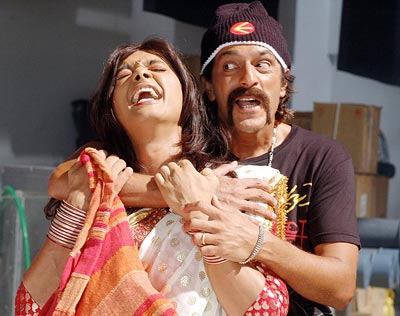 Your mindset usually has to change according to your get-up.

(Laughs) If the shoot lasted for another 15 days, I think it would have affected my hormones because you are so much into that zone and into the character. Even after the make-up is removed, you tend to be in that zone. So sometimes Paritosh would tell me, 'what are you doing? Please time yourself like a man.'

So it definitely affects you. Now, I'm out of it.

When I sat for make-up for the first time, I closed my eyes and opened them only after the make-up was done. I just could not recognise myself because of the wig and bindi. It was a funny but superb experience. 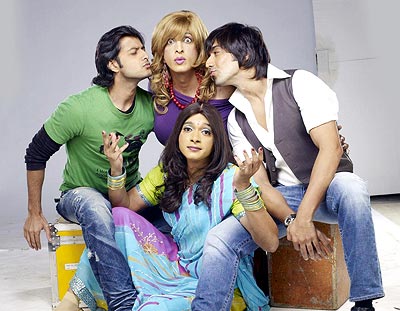 You're paired opposite Celina here, and have worked with her before too.

We share a good rapport. She's very chilled out. We just had one scene together in Apna Sapna Money Money. But we got to know each other well in Golmaal Returns. She is very hard working and professional. She comes to the sets on time and gets ready on time. During Golmaal Returns, I thought she would come late and get ready late. But when I went on the sets for a 9 am shift, I learnt that she was already in, and was waiting for me. Nowadays, we even improvise on our scenes, as we know each other's strengths and weakness. We compliment each other well.

Did Celina give you any tips to play a woman?

Everyone would advise me, especially Celina. She would advise me on my gestures and expressions. She taught me the nakras of a woman. I would copy the girls on the sets -- how they walked and talked and carried themselves. 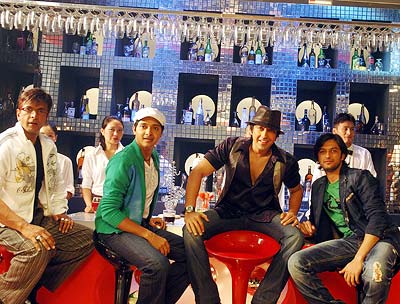 Paritosh Painter and you were in the same college. So the comfort level must have been greater.

Yes, Paritosh, Sajid-Wajid and I were in the same college. We were in a drama team. I would act and mime and do mimicry as well. Paritosh would write and direct and Sajid-Wajid would compose music. The associate director Santram Verma, and writer Ballu are also from the same college. So it was like a college reunion.

This is my fifth film with Mukta Arts, and it was a great experience.

Tell us about the music of Paying Guest.

When we were shooting for the film, all of us sat and listened to the music. And we liked it. There's a club song called 50-50. It's picturised on the four boys. When I heard it for the first time, I thought it wasn't that catchy and even told Paritosh about it. So he asked me to listen to it when we started shooting. It started growing on me while shooting and has now become one of my favourites. In fact our choreographer Remo told me that if this song becomes a chartbuster, we'll have to treat him. I feel I'm losing that bet. All songs are peppy.