A closer look at Amitabh Bachchan 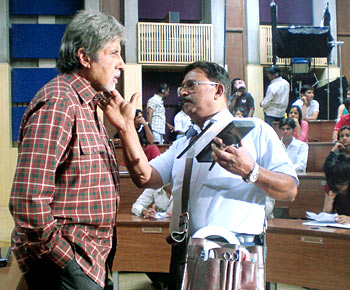 Image: Amitabh Bachchan and Deepak Sawant on the sets of Teen Patti
Patcy N in Mumbai

Make-up man Deepak Sawant has probably worked with Amitabh Bachchan the longest, at 30 years. They have been together since Zanjeer catapulted the Big B to fame in 1973.

On November 7, the superstar completes 40 years in the industry, and it's time for those closest to him to recount their experiences of the star. Sawant adds to the beautiful anecdotes filmmaker Ravi Chopra gave earlier.

I first met Amitji on the sets of Raaste Ka Patthar (1972). Raaste Ka Patthar starred Shatrughan Sinha and Amitabh Bachchan. Shatrughan was a big actor then. Both of them had the same secretary Pawan Kumar. Due to some problem, Shatrughan got a personal make-up artist for the film but Amitji did not. So I was asked to be his make-up artist for the film. That's when he told me that when he will keep a make-up man, he will only keep me.

He made me his personal make-up man after two years.

I wanted to work with Amitji because he was good-natured and dedicated. He never fought with anyone. His work was also very good.

Amitji would always sit in a corner on the sets and rehearse his dialogues. He would not interfere in other people's work. Some thought that even though he is a new actor, he was proud and did not mix up with others. But that was not the case. He just wanted to be better. He took everything as a challenge.

After 30 years with him, he is still the same. Today's actors don't rehearse as much. 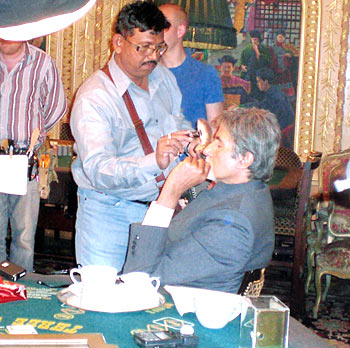 Image: On the sets of Teen Patti

My greatest regret is not being with him when he shot the critical Coolie scene when he got injured because whenever he did risky shots, I would tell him to be careful. Due to a misunderstanding between us, I was not working with Amitji for four years. Amitji had this habit like Akshay Kumar -- he does all his action scenes himself.

During the shoot of Jadugar (1989), Amitji faced some problem with his beard. The beard was made of synthetic hair and everytime you touched it, it would get entangled. That's when Amitji called me to sort out the problem, and we decided to work together again. Since then I have worked with regularly. I have not even taken a day off. When Amitji takes a day off, that's my off day as well.

In all these years, Amitji never neglected his work. Even if he was disturbed, he would shoot as though nothing happened. He would be totally engrossed in his work. He has faced a lot of problems in his life but he never talks about it.

'I liked Amitji's faith in me' 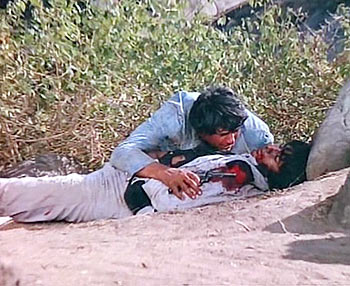 I remember an incident while shooting for Sholay (1975). I was relatively new in the field; Saroj Modi was the film's make-up artist.

In one scene, the bullet had just touched Amitji's hand and gone, and (director) Ramesh Sippyji wanted the make-up accordingly. Saroj Modi had brought the make-up material from London. But Amitji asked me to try it first.

I was very nervous but I brought some red colour and cotton and did the make-up. When Jayaji (Bachchan) entered the room, she thought it was real blood flowing from Amitji's hand and she screamed. Everybody liked the make-up. But the shot was cut in the final editing. I liked Amitji's faith in me.

In another scene, when Amitji gets killed on the bridge due to the bomb blast, they wanted make-up only on his face. But I told Amitji that it would not look good. I asked him to remove his clothes. Then I took a stone and hit it hard on his clothes, and made holes there. I painted the area around the holes red. So it looked like splinters had entered his body (and he was bleeding). 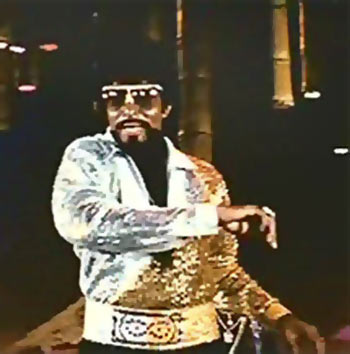 Image: A scene from Desh Premee

In the song Gore Nahi Hum Kaale Sahi in Desh Premee (1982), I had to paint Amitji black. Whenever I had to do difficult make-up, I would always try it on myself first. I used a black stick and black powder but did not get a good finish. It looked patchy. So I tried the black stick with talcum powder, and the finishing was exactly the way we wanted. The rest of the cast like Prem Chopra and Hema Malini had patchy make-up. If I had done the trial and error on Amitji, he would have gotten tired and irritated.

When he took a gap for three years when his films like Insayinat and Indrajeet did not do well, I did not work. I could not join another actor otherwise people would think that I have left Amitji. But my wife runs a beauty parlour in Mumbai, so we did not face any financial crisis.

Amitji started keeping a beard because he wanted filmmakers to know that he was ready to do character roles like playing a father.

Meanwhile, I produced a Marathi film called Akka (1994). Amitji and Jayaji even agreed to act (a few scenes and a song) in the film. The film good publicity because of him. Jayaji can speak Marathi fluently but Amitji had to put in some effort. 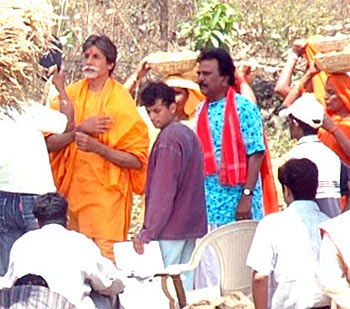 Image: On the sets of Ganga

Amitji had gone to Uttar Pradesh to attend the Chhat puja once, and people were crazy about him. That day I decided to make a Bhojpuri film for this audience, who love him so much.

I wrote the script of Ganga, and gave it to Amitji. After 10 days, he read the script. When I went to his house, he told me, 'Deepak Sawant tumhari picture superhit hai. Tum kaam chod ke chale jaoge (Deepak Sawant, your film is a superhit. You will leave work and go).

I told him that I would not leave.

On the day of the mahurat, Amitji was shooting for Kaun Banega Corepati. I touched his feet and asked him for blessings. He was shocked to learn that I was with him and not at the mahurat in London. He immediately called Ravi Kissen, the film's hero, and spoke to him. He told him to do his work properly in my absence otherwise he would scold him!

When he was in the US shooting for Kabhi Alvida Naa Kehna (2006), I showed him the first rushes of my film. But soon afterwards, he feel sick and his secretary asked me if I could take someone else in Amitji's role. But I said I would not make the film without Amitji.

In a press interview, Amitji said that he would complete my film as soon as he was well, as I would have had to pay huge interest. I felt very good that he thought of my film first. So many of his movies, including Karan Johar's film, was on hold but he said he would do mine.

When he came on the sets, he shot nonstop. He shot 27 scenes and three songs in three days.

Now I am making an album with 14 songs on Amitji's life. It will include various stages of his life like his birth, fame, marriage, children, accident, Bofors scandal and other things.

Today, Amitji is 67 and still, he works hard. For the Bigg Boss shoot, we left Mumbai at 6am (the sets are located in Lonavala) and shot until midnight.