Image: A scene from Aayirathil Oruvan
Shobha Warrier in Chennai

Karthi, son of veteran actor Sivakumar and brother of the hottest Tamil star, Suriya had a dream debut in Ameer's Paruthiveeran. That was two years ago.

Now the promising youngster is all set to for his second film Aayirathil Oruvan directed by Selvaraghavan. The film took a long time to complete. His third film, a breezy entertainer is in the final stages of shooting.

It has been a long wait, almost two years. Aren't you restless?

There are moments when I do get restless but then I stop to think of what I have done which is something big and special. Paruthiveeran too took time to make but I knew we were making something very interesting. I have the same feeling now.

Were there moments when you felt anxious?

Yes. There were times the sets were put up but we didn't work for three months. Those were testing times. I couldn't change my looks to work in any other films. I had offers to work in films but then I couldn't take up any of them up.

'Films with pirates, mummies have not been seen in Tamil before' 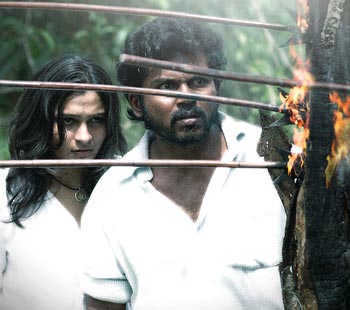 How did you tide over the difficult period?

I kept training hard. I tried to learn new skills. There was so much more to learn. I had to go for physical training for Aayirathil Oruvan. I had to do stunts which required huge leaps. I had never done anything like that before. It increased one's speed and agility.

What is so special about Aayirathil Oruvan?

It is an adventure film, a genre that has not been attempted in recent times. After the kinds of films Jayashakanr did, such films were not seen in Tamil. Films with pirates, mummies have not been seen in Tamil before. This is an attempt to create something on those lines.

Two periods are depicted in the film; one in the 12th century and the other is contemporary. So, to be able to live in that period itself is a new experience, which I don't think I will get again in life.

Is that what attracted you when you were offered the film soon after Paruthiveeran?

The major attraction was to work with Selva, who called me up with a different script in mind. After seeing Paruthiveeran, he said we should do something other than romance, perhaps an adventure. I told him I was game for anything. That is how Aayirathil Oruvan started.

I also felt that after Paruthiveeran, people expected something special from me. It all fell into place for me when Selva offered me this. 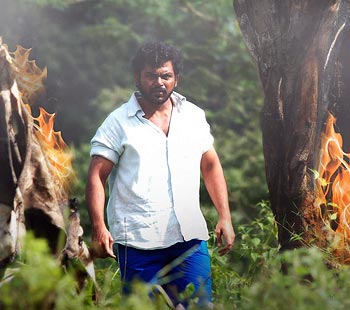 Is it good for a young new actor to have this kind of a huge gap in his career?

As I said the same thing happened during Paruthiveeran. After the film got released, everybody said it was worth the wait. Many told me that they liked me because I worked so hard. Similarly, I am sure when people see Aayirathil Oruvan, they will understand why it took so long.

Is there any difference in your look between the two periods?

Yes. There is a difference in the costumes and the look. In the contemporary period, I play a beared guy from Madras with ruffled hair and a foul mouth.

No. In Paruthiveeran, the guy never mingled with people but this guy is all the time with people. He is talkative and out to have fun. He can never be polite, always mouthing abusive language, even with women.

'I had the license to abuse people in foul language!' How was the experience of using all those expletives?

I had no problem [laughs]. I thoroughly enjoyed because in real life, I would have never been able to utter those words! [Laughs] I am not allowed to. And in this film, I had the license to abuse people in foul language!

There was a long shot in the film where I would walk and keep shouting all the bad words in Tamil and after the shot was canned, there was a huge applause from those who watched. Imagine getting applause for using bad words! [Laughs] That was fun!

Do you dare use it anywhere else?

I better not. My mother would kick me if I tried!

You said you signed the film because of Selva. How different was the experience working with him?

Everybody knows that he is one of the best directors in the country. Every actor wants to work with him, The good thing is that he gave me a lot of confidence. He allowed me do a shot the way I wanted to after explaining it to me. He would tell us what he wanted but gave us the freedom to improvise on our expressions.It never felt like acting. It was feeling the moment. He would approve of such things. That way, I learnt a lot. On the other hand, in the first film, I was completely spoon-fed.

'We were always bitten by leeches while shooting in the forest' 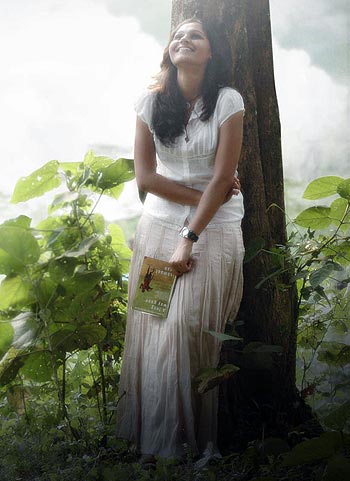 Once when I interviewed Selva, I asked him why his protagonists looked and behaved like him. He said, he would enact every scene and ask his actors to do the same thing...

Except in one film, his lead actor was his brother Dhanush and he looks like Selva. Even their voices sound similar. But in this film, he let me do the acting in my way. Because my appearance and voice are different, I don't look like him. I enjoyed acting under him. It is a treat to do scenes where you silently enact. That is his speciality and I got to do in so many such scenes. Work wise, he is a lot like Ameer. They do not get tired of taking many takes to get what they have in mind.

Was the role physically challenging?

Oh My God! Like they say, all adventure films start and end with rain, forest and the night! None of these are easy. The schedule at the Chalakkudy forest in Kerala was shot mostly at night. We were deep inside the dense forests, and it was always raining. We were always bitten by leeches. We saw panthers, king cobras and what not! We were there for 45 days. So, you can imagine how tough it was. But it was fun too as I am a huge wildlife enthusiast.

We stayed at the forest guest house and were like college students. There was a huge river flowing and we would sit there and watch the sun set. It was only then that we started shooting. We could hear all sorts of birds once the sun set. We never got tired of it. I missed the forest after the shoot got over.

'We saw camels crossing the roads in Jaisalmer while we are used to seeing stray dogs!' 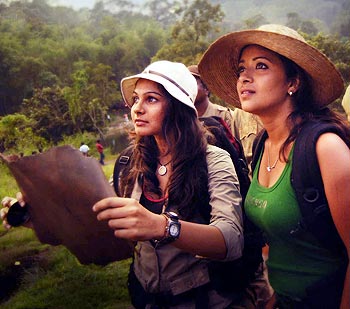 Do you enjoy acting?

Yes, because you get to travel and I love travelling. We shot in a deep jungle, in a desert in Jaislamer where the sun is so amazing and magical. We saw camels crossing the roads in Jaisalmer while we are used to seeing stray dogs!  We then shot completely on the sets in Hyderabad for three months. I want to travel all over India.

Are you anxious to know the reaction of the audience?

Of course. It was not easy to make an adventure film. At night ,when we shot in the rain, it was very cold and we were in rags. When people see all this they will appreciate it. It is like cooking biriyani. You know people are going to enjoy eating it. What was the feeling like once shooting got over?

In Paruthiveeran also, you had to darken your skin.

Yes, at least in that film, I wore clothes. In this film, only rags. [Laughs]

But your next film Paiyya is going to be a different one.

Yes, it is a pakka commercial film. I would say, I am getting relaunched. I am in this film without a beard and without dark make up. I had to lose so much weight for the film. You will not recognise me on screen! I couldn't believe myself when I saw the songs. It really shocked me. I asked myself, 'Is it really me?'