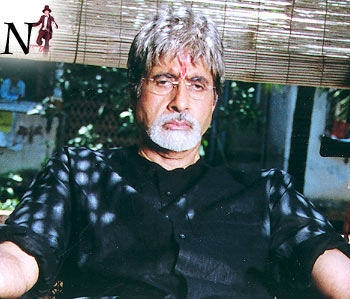 Amitabh Bachchan has contributed so much to Hindi cinema over the years that he deserves a loud round of applause. On November 7, the superstar completes 40 years in the film industry.

We present an A-Z of Bachchanalia, the letters expanding into unforgettable bits of his filmography. Here's the second part of the special. Don't miss the first part.

At the time Ram Gopal Varma launched into his ambitious Godfather remake, Amitabh Bachchan had settled into a comfortable groove playing father roles (mostly to Akshay Kumar) and generally finding his niche as a grizzled old character actor.

Ramu was having none of that, deciding that The B is far too Big for life. Subhash Nagre might have been based vaguely on a certain Maharashtrian politician, but the fire Bachchan breathed into the character was all him -- and showed us that a dragon can roar any time he pleases. 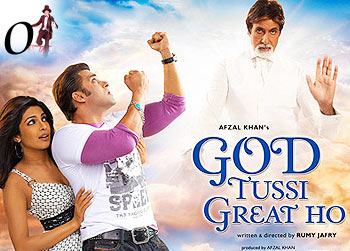 Not just is he absolutely everywhere when it comes to cable television options on any given night, but Bachchan is deified by the nation, put on a pedestal even the Divine can't regularly clamber upon.

Until a few years ago, there was a regular system of darshans outside the actor's Juhu bungalow, and it's no surprise that he of the booming baritone is now frequently called in to play or voice the Almighty, doing so for films like Hello Brother, Agni Varsha and God Tussi Great Ho. 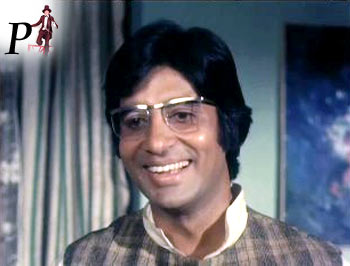 A lanky, diffident fellow with an unmistakably bookish air, vintage Bachchan was a perfect on-screen fit for academic garb, and he memorably played a professor in both his most acclaimed recent role as well as his best performance of all time.

Q Queue, as in The Line Starts Here 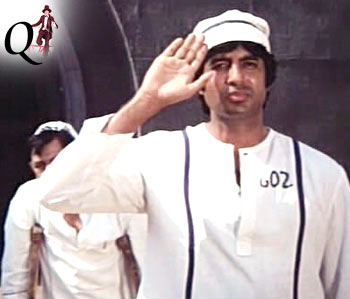 He was a trendsetting star in every way, from spawning generations of angrier young men to taking on different genres and mediums. For a long time film magazine ratings featured Bachchan as the top 10 with other heroes coming in only at 11, and even now every actor worth his crores is taking on TV only after Bachchan's made it the biggest thing around. 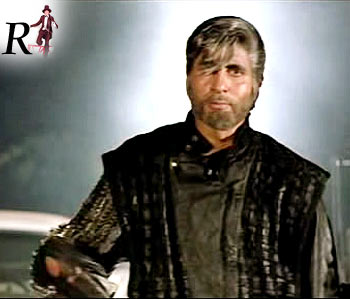 For his late-80s comeback, Amitabh Bachchan let wife Jaya write a story and -- while this involved a bizarre asthmatic vigilante with a chainmail arm -- totally committed to the cause, and Shahenshah not just rocked the box office but remains memorably iconic to this day.

It's hard to pull off a superhero in a land where all heroes can bash 12 baddies by default. But Bachchan brought his own blend of hard-hitting sinister and complete alter-ego tomfoolery to the part. The result? The most memorable who's-your-daddy hero Hindi cinema's ever known. 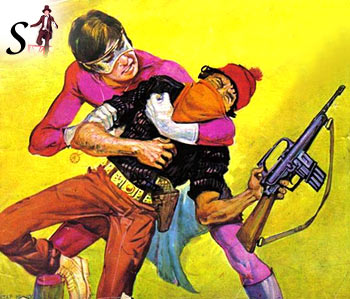 The artwork was pretty good, and while Mr Bachchan didn't go as far as wearing his underwear on the outside, he had a falcon called Shaheen and Robin-style sidekicks Anthony and Vijay.

With Gulzar as scripting consultant, the comics were a fantastic, albeit tragically shortlived ride. The kind of ride only Bachchan, with his persona and his ouevre, could take us on. 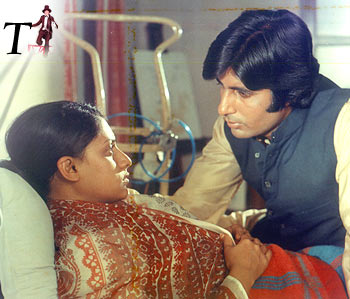 One of Bachchan's most brooding performances came in Hrishikesh Mukherjee's Mili, where the actor played Shekhar Dayal, a recluse who liked nothing better than his whiskey on ice and lots of alone time to observe the stars.

Bachchan was a revelation in the role of a scowling, irritable drunkard while wife Jaya played the titular Mili who brought a smile to his otherwise gruff lips. One of the few films that captured his poetically melancholy side, Mili captured Amitabh at his most darkly appealing. 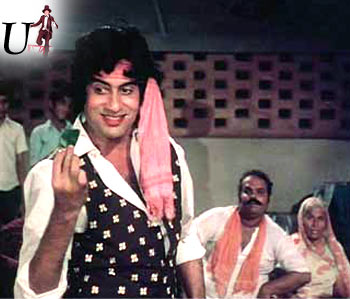 The Allahabad-schooled lad was famously referred to as the boy from the banks of the Ganges, the 'chhora Ganga kinare wala,' in the iconic Don song, Khaike Paan Banaras Wala, and his political forays have all been from the state. He frequently played characters from the heartland, and often sported the last name Srivastava -- his own factual name. 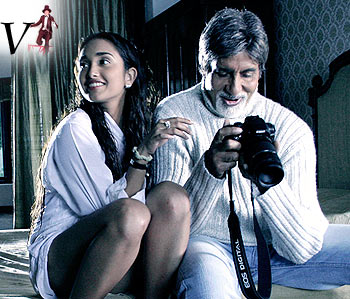 What can you say, the name just stuck.

Till today, the name Vijay instantly evokes Seventies-tinged memories of a tall man with a long nose and longer sideburns, a flared collar spread wide open, and a hand already coiled into a fist. Amitabh has played 19 Vijay's over the years, starting from 1973's Zanjeer right up to 2007's Nishabd. The name came to be synonymous with Bachchan's furied on-screen persona, never more than when he unforgettably hissed it out (always accompanied by the rest of his on-screen name, Dinanath Chauhan) in Agneepath. 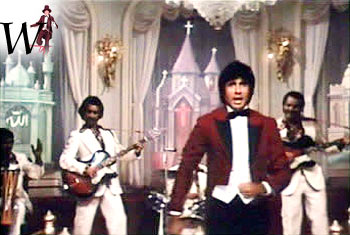 Twenty-five years before Vikas Swarup christened his Q&A protagonist Ram Mohammad Thomas and Farah Khan brought on a songful of cameos in Om Shanti Om, Bachchan did it all with the spectacularly star-studded John Jaani Janardan in Manmohan Desai's Naseeb.

Bachchan played a waiter with great elan, sure, but true to form there was more to be done than just a regular job: Johnny was movie-lovin' waiter by day (and night), and hardcore steelcage-fighter into the wee hours of the morning. No wonder he had crooners swooning. 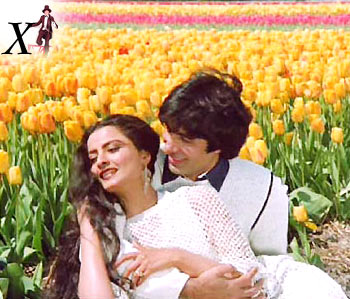 No, of course Amitabh didn't star in the disastrous 1994 film. Who did, however, was the leading lady he shared more than a dozen hits with, one who fuelled both magazine-selling gossip and celluloid-melting chemistry.

She was the mystery ingredient, the X factor that made him even bigger than he was, and no discussion of his cinema is complete without the one woman who was more than content merely emulating him in every way. This 1994 fiasco was Rekha's remake of Bachchan's Don -- a cinematic failure perhaps, but as touching as tributes come. 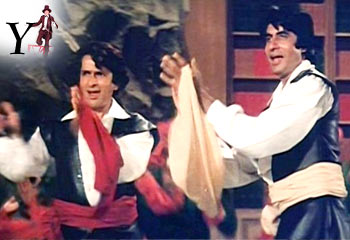 Shaan, which featured that insanely fun song, is an unbelievable film. Directed by Ramesh Sippy with much fanfare after his industry-shaking Sholay, the film had Amitabh and Shashi Kapoor as conmen, Kulbhushan Kharbanda as an eggheaded Bond-villain wannabe called Shakaal, and gave us immortally bizarre sequences such as Sunil Dutt being chased to death by scores of positively adorable beagle puppies.

It's hard to conceive just what the film's writers were on, but Amitabh was in tremendous fettle as he, through all that camp and cheese, grinned -- cheekily enough for us to bear it. 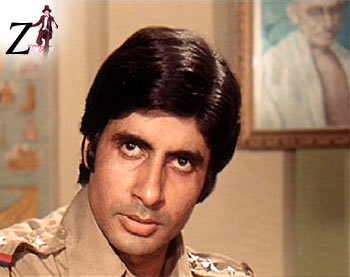 It should be made mandatory for police stations across the nation to have on their walls, right next to the ubiquitous portraits of the Mahatma, a framed photograph of Amitabh Bachchan's Inspector Vijay Khanna.

Pran's hand rests on a chair and Bachchan swiftly plants an epochal kick on it, that single moment birthing the Angry Young Man persona set to dominate Indian cinema for decades. Prakash Mehra's 1973 classic Zanjeer sees Bachchan at his glowering, seething, action hero best, and he's so bloody inflammable the screen is fit to burst. Those legs are long and meant for fighting, that baritone takes on cold ruthlessness, and his eyes are tinderboxes. Awesome.