'The Kurbaan look will become a rage' 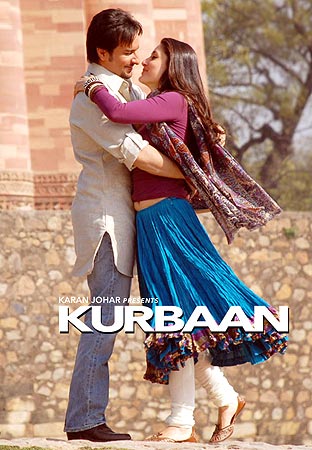 Karan Johar's Kurbaan is making news all right, but for all the wrong reasons.

The movie was recently in the news when Shiv Sainiks objected to Kareena Kapoor's bare-back poster. Plus, the actress has a lovemaking scene with co-star and real life partner Saif Ali Khan in the movie.

But controversies aside, the couple really looked good together, and many would like to see if they sizzle on screen as much as their poster did.

Thus enter designer Akki Narula who was entrusted with the task of dressing up the couple as well as the rest of the cast which includes Dia Mirza, Vivek Oberoi, Om Puri and Kirron Kher. He tells Nithya Ramani of his experience.

Tell us in detail about the look of the cast in the film.

Though I'm only 10-films-old, I'm glad that Karan trusted me with two of his films -- Dostana and now Kurbaan. Karan and Rensil [D'Silva, director] briefed me about the script, which is very important for the clothes -- they should blend with the character rather than stand out. It was important that I look into the demographics, seasons and economical stature of the characters.

I knew we were going to shoot in Delhi by the end of October, which meant winter clothes. I researched the different styles by going to the colleges, canteens and the local markets there.

Since Kurbaan has about 30-35% of happy moments, I came up with a palette of colours that shifted from bright to varying shades of grey and black.

Kareena Kapoor plays a New York professor who comes to Delhi University. Since she will be living in the city, it made sense that she would be wearing local stuff. So I gave her lots of outfits in rust, burgundy, olive green, blue and purple. It was a new look for her -- plus they had the college vibe to it.

I also dressed her in full sleeve t-shirts with v-necks and dark coloured ankle length crushed skirts. Her skirts and churidars have a lot of Jaipuri work on them. She wears the churidars underneath the skirts, which I think will start a new trend. She will also be seen wearing mojiris to go with them. To go with the climate I gave her a lot of scarves.

As far as accessories are concerned, I gave her a lot of silver oxidized jewels from Delhi market. And I must say, she really looks fabulously hot in them. We have tried to keep the look very local and real.

'Kareena is the last person who would want to dress up' 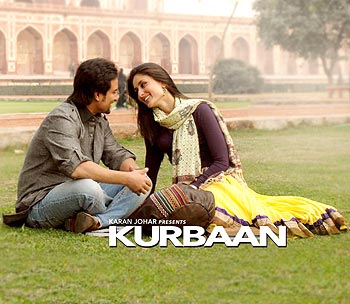 The Shukran Allah song shows her in yellow and blue skirts as well as the red salwar. The salwar with a low back -- she looks very sexy in it -- was made out of about 60 metres of fabric.

In the movie, Saif and Kareena move to the US after their marriage. Even there, their outfits are every similar. If you are moving from one place to another you will obviously carry some clothes with you. So it would not make sense to see them suddenly start endorsing Armanis, Guccis, Prada or any of the high end brands. We made sure we didn't take any cinematic liberties -- we kept it all very real.

So we stuck to the same v-neck long sleeves t-shirts and gave her trench coats and jeans. She is seen wearing more of jeans and track pants. I gave her a Zara trench coat and tweed and banaras scarves. But she continues to wear the silver oxidized jewels. She always sports her 'Om' pendant.

As the movie gradually moves to the terror part, the colour of her outfits too reflect the change, which is more of grey, blue and black.

We did a lot of 'look tests' before zeroing on what we wanted. I gave Kareena a wardrobe to pick from everyday. She was patient enough to try out each and every outfit. She trusts me a lot, which for a costume designer, is important.

Kareena is the last person who would want to dress up. She likes to keep it simple and when I gave her this look, she was very excited. I also looked after the make-up and hair department. She has very minimal makeup in the US scenes -- she wears mostly kajal.

I think the Kurbaan look will become a rage among the youngsters.

'Facial hair on a man makes him more sexy' 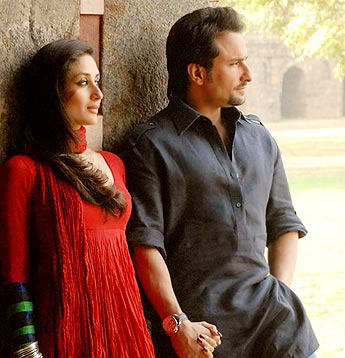 Saif plays a professor too and is seen wearing very simple jeans and shirts in blue, grey and green with v-neck sweaters. He also wears pathani kurtas with his jeans. The pathani kurtas are more like short kurtas. Since he is a Delhi University professor, I didn't give him Gucci. He needed to be real.

After marriage too, his outfits are more or less the same. He wears long jackets in blue and grey. The colour speaks a lot about his character. During the terror scenes he wears more of darker colours in leather.

Saif's look for the film was very important. Karan, Rensil and I decided that he shouldn't be clean shaven because a stubble or a beard gives grittiness to the character. I personally believe that facial hair on a man makes him more sexy.

'I gave Dia a lot of short skirts with short jackets' 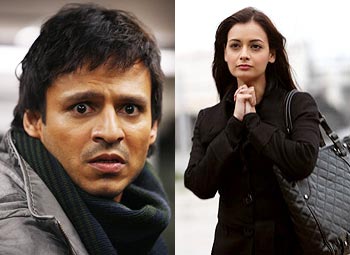 Vivek wears a lot of dark jeans, t-shirts, sweaters, wind cheaters in navy blue, grey, olive green, and black leather jackets. When I met Vivek for the time, he said, 'if Akki is doing the costumes then I don't have anything to worry about.'

It felt good to see the trust the actors had in me. His outfits are mostly from Zara and H&N. In fact we did his fitting trial when he was at Dilshad's salon trying out new hair styles. So the whole look fell into place.

'Amitabh Bachchan is the best dressed actor in Bollywood' 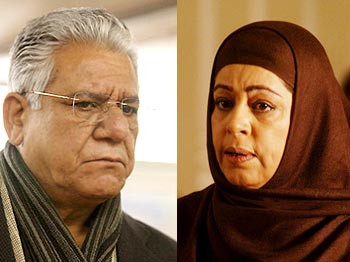 I gave Omji (Om Puri) a lot of pathanis with suit vests. When I worked with him in Don I found out that he gives importance to detailing which I liked. I got his pathanis washed by a dhobi to get the worn look, which he noticed.

I gave Kirron Kher a long tunic, long skirts and shawls wrapped around her head. This is the first time she is playing an Afghan. She was very involved with her outfits. I think she is a very intelligent actress and falls into the character with ease. During Dostana we went shopping together. For Kurbaan she had her ideas that she shared with me and we worked on her look together.

Have there been times when your ideas were rejected and you had to do what Karan or Rensil or the actors suggested?

No. I am very persuasive. I feel proud working with Karan and such situations hardly happen. We start our research and preparations three months prior to shooting. We all make sure that we are all on the same page.

Who according to you is the best dressed actor in Bollywood?

Amitbah Bachchan, without a doubt. By best dressed I mean off screen. I have been with him on shoots and gone out with him for dinners. The way the man dresses is always classy. He has an enviable collection of shoes. I think he will look best in black velvet Shanghai Tang jacket.

Who are the actors you would like to work with?

I would love to work with Sonam Kapoor, Abhay Deol and Prateik Babbar, who I think has great energy. I also want to work with Salman Khan and Aamir Khan.

Housefull. I am doing the costumes of all the girls -- Lara Dutta, Deepika Padukone and Jiah Khan.