A doctor who rocks the music charts 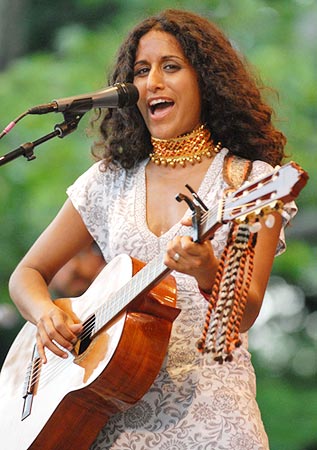 Even before the band Rupa & the April Fishes began a tour that would take them to over two dozen cities in America, Canada and Europe, bandleader Rupa Marya was being sought out for interviews by major publications and radio including America's prestigious National Public Radio.

Her second album, este mundo (the world), following her debut album eXtraOrdinary rendition (2008) has been reviewed in major publications including London's The Guardian.

"I want to learn Hindustani classical music," she says, adding that one day she hopes to produce an album that features Indian classical and folk music and New Orleans jazz.

The band has performed at major venues including New York's Central Park SummerStage, and the Montreal Jazz Festival.

"Our music can touch anyone who cares for the world around us," she says. "There is a lot of melody in it but we also want our listeners to look at the reality with fresh eyes. We want them to examine the society on a deeper level. We want to shake the ground beneath their feet. Finally, we want them to take to a spiritual level."

Fluent in Hindi, Spanish and French, she has written the lyrics in French in her first album and mostly Spanish in the new. 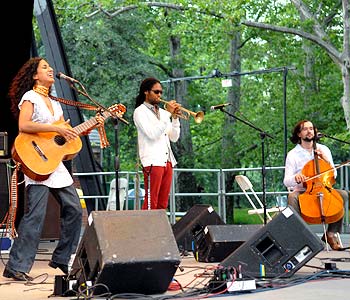 For an artist who hopes for a borderless world, and whose current album is dedicated to Latino undocumented workers who have died or suffered greatly while trying to get into America, writing in Spanish (or French) comes naturally.

Her imagery is often derived from what she has seen or read or heard about marginalised people.Seeing a stray dog in a Mexican city made her think of undocumented workers -- she won't use the word illegal -- in America. The song La Linea from her new album is translated (in part):

walking in this street

I am a stray woman

the wind is blowing 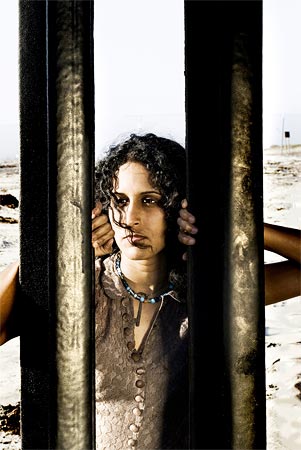 Daughter of a scientist, Bharat Kumar Marya, and his music-loving wife, Radesh, who migrated to America in the early 1970s, Rupa Marya has been in love with music and science from her childhood.

Whenever her grandmother punished little Rupa and ordered her to stand at the corner of a room, the girl never stood idle. "She sang all the time, she sang nursery rhymes and much more," her mother says.

Marya says she knew early on in her college days, as she was playing and singing in San Francisco cafes and clubs, that she just cannot live without creating music.

An internist, she says she is able advantage of a flexible residency track designed for doctors who may be expecting children. She spends six months working as a doctor and the other half of the year touring.

"Quite a bit of my music comes from my interaction with the patients," she says. "Many of them tell their life stories to a caring physician; they don't tell these stories to many people." 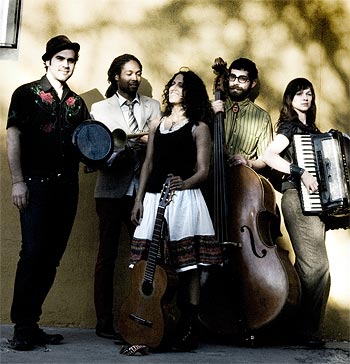 One of her favorite songs in the new album is called Por la frontera.

She explains how it came out:

'The first trip down to the US-Mexico border with the band was in 2007 and I wrote this song on the way there,' she discloses. 'We drove along the old highway 101, El Camino Real. This street links the old Spanish missions up and down California. Along the way, we saw jornaleros (day labourers) in the fields, talked with the Latino busboys and cooks in the clubs we played who were fascinated that a group of gringos were going to Tijuana with the purpose of simply seeing the border. We were starting to ask simple questions like: Who does this border benefit and how can a line be worth more than a life?

'Since the US has increasingly militarised the border along the west coast, immigrants have been making a deadly journey through the desert, many dying of thirst or starvation. The end of the song features an exchange between drums and bass -- a tug-of-war between life and death -- and a prayer from the mission district's community healer Jorge Molina, asking for safe passage for those seeking a better life in the US. so many people come to our city to do menial labor, making as much money in one hour as they do in one day in Mexico. this forced migration driven by economic pressures has shaped the face of our surroundings.' 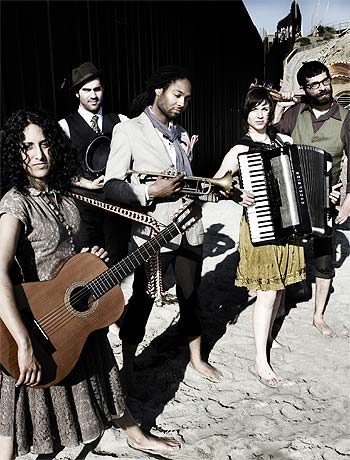 She has also been inspired by painful encounters to write a song, she said discussing the birth of Une Americaine a Paris.

"I realised in an encounter about how the politicians have created uneasy boundaries between people," she says, recalling how a man who was having a friendly conversation in a Parisian cafe turned menacing when he realised she was an American.

'This wall came down between us,' she says referring to the man who was of Algerian descent, 'especially when he asked me if I wasn't afraid to be an American in Paris with 'all these angry Arabs?'

She recalled the incident in an interview. The man then said, 'If you were in my neighbourhood...' and he just went [motions hand across throat]... That personal connection that we had just froze in that moment, and it was probably one of the most chilling experiences I've ever had face-to-face with a stranger.'

While she first started by playing straightforward singer-songwriter material in English, she has said in interviews, she was also 'beginning to forge a new sound that was more representative of her complex identity.' 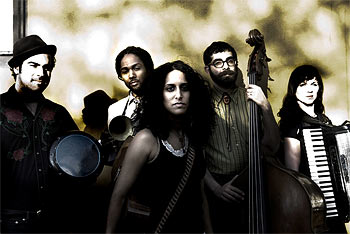 Marya, who has lived in southern France where she came to know of Arab music (in and around Marseilles) and fluent French, switched on to writing in French, and then in Spanish.

She saw her writing in foreign languages as a challenge and helped define her universal outlook. 'It was music that was trying to explore what it meant to me to be who I was growing up in all these different places with all these amazing stories and this family who dragged me all over the world,' she has said. 'It's trying to give voice to those beautiful things that came through my heritage.'

"My goal was even though I was writing in French I wanted people to understand it and to feel it," she said. "And that was sort of the surprise of this music, how accessible it was to people."

"Most of the songs in my new album are in Spanish, and I am glad to watch people who do not understand Spanish react to them instinctively."

Time Out magazine agrees with her.

'With their second album, este mundo (this world), Rupa & the April Fishes hold up a carnival mirror to life and present a warped, humorous and occasionally disquieting reflection,' it wrote. 'Sequestered beneath Rupa's infectious and captivating melodies are thought-provoking themes that address life, love, art, death and the real and artificial divisions that keep us apart. The San Francisco-based musical agitators are specialists in crossing borders and building bridges, and on este mundo, out on Cumbancha, they effortlessly blur the boundaries of genre and geography to create a sound.'

Racing up the charts 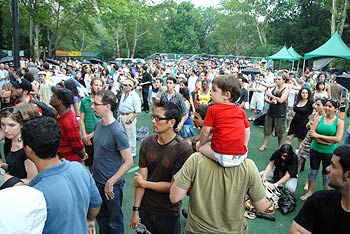 Her first album consolidated her reputation as an incessant voice against the xenophobia that has been sweeping America since 9/11.

Long before the album came out, Rupa & the April Fishes had started singing 'subversive music' in cafes, museums, and bars.

"Watching this country become more fearful and journalists becoming the mouthpiece of the administration, I was disappointed, hurt, disturbed and became so angry," she recalls.

For several months following September 11, she could not pick up her guitar. "But I remembered that I was not brought up to be a defeatist. I began to think about creating words and music that would reflect what I wanted to see in the world, to give a voice to the things that weren't getting much airtime. I started with an assignment to write 10 songs about love, compassion, and uncertainty in a time of love across borders."

The album reached the top spot on the iTunes charts in its category on numerous occasions, was featured on multiple National Public Radio programs and described as 'one of the hottest emerging acts' by Time Out Chicago.

The new album could be more popular, thanks to the fan base she already has.