My Name Is Karan Johar 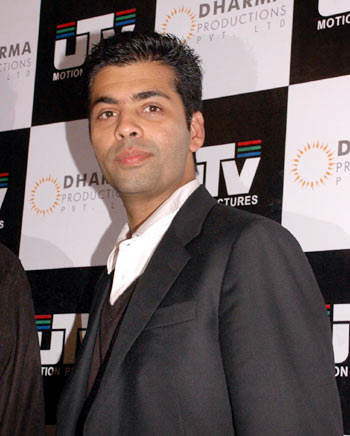 It's busy season for Karan Johar. Wake Up Sid was warmly recieved, Kurbaan is coming right up and every single waking moment of his is currently spent in working on his upcoming directorial project, My Name Is Khan, starring perennial favourites Shah Rukh Khan and Kajol.

The director in him is stepping well out of his comfort zone, even as the producer within is enjoying handing over the reins to first-time directors who, he claims, are making films he can't possibly helm on his own.

In the first part of this long conversation with Raja Sen, Johar discusses his kind of cinema, honesty as a filmmaker, and being unfaithful to the Dharma Productions family.

When you look at films that you wouldn't be comfortable doing, is that out of choice or ability? Like when you say you couldn't make a Wake Up Sid...

Oh, there are a lot of films I can't do. And I look at them sometimes happy I can't do them and sometimes really sad I can't do them. For the lack of a better word, maybe I'm not talented enough to execute a certain kind of a film.

When I saw Rang De Basanti, I was so floored by the way it was shot and executed, and I was like 'sh*t, I can't do this,' and I feel limited sometimes. And then I see some films and I'm like 'I can do this and I would have done it better,' you know?

'I'm not going to cater to anybody's sensibility' 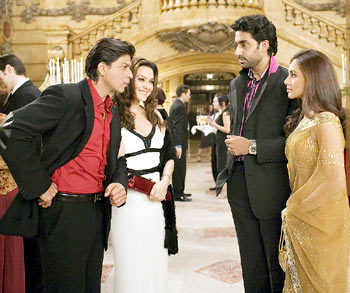 So do you see yourself now as increasingly aware of the external perception? And has that consciousness helped your work?

I'm not going to cater to anybody's sensibility because I would never be able to, and then I wouldn't be honest to my craft. But I do know that there is a world that doesn't like me. And I love meeting all kinds of people who tell me good and bad, and I think it's very important to surround yourself with no-men.

That's the first thing I do around me. I'm like, tell me what's wrong. Because I know what's right, that's why I'm doing it. But I don't know what's wrong. We never do. When we see our films, we love our work.

Do they hold up as well in hindsight, or do you now find yourself questioning decisions made earlier?

Kabhi Alvida was coming on TV the other day, and I was like 'it's half an hour too long; sh*t, it's too boring; sh*t, these item songs don't work; it's overcast.' And none of that was told to me when I was making it. And we had a really good group of young, energetic, evolved people around me.

But we love our work. We go on set, and with an equal amount of passion. None of us are dishonest about what we do, but no one actually tells you. It's important to try your level best to self-analyse, and I think the older you grow, your degree of self-analysis increases. When you're young, you're more innocent and honest and, I would say, vulnerable, whereas now we may not be. Image: The My Name Is Khan poster

So external criticism doesn't matter as much anymore...

I mean, who doesn't like to hear praise? We all do. Come on, all of us in the business love reading great things about us. And it pains you to read some terrifying reviews and you cringe everytime someone criticises you, from your dress sense to your sense of cinema. But at the end of the day, you have to know that that's the way it is, and that's the business you're in.

You're in the only business in the world that's judged on one friday, globally. And your failure and success are highlighted with equal measure. So what do you do? You chose to be here. And there are so many great perks that come out of it (smiles)

Coming back to the bit about being suited for a kind of cinema... Accepted that you know your creative space, but it has to be said that you've been altering your subjects quite significantly with each film, most drastically perhaps with the next one. Do you then just look at a personal connect with the script when deciding what film to make next, and does that evolution from subject to subject proceed alongside your personal growth?

What works for me in My Name Is Khan is my personal disconnect from the script. I was part of the research, part of the thought process. But I wasn't involved in the minute scripting level, which Shibani [Bathija] actually wrote, and I found that for me, as a director, that worked really well.

When I write the material on my own, I lose objectivity. And I perhaps don't have the ability to strike that, that sense of 'I wrote this [but] I don't need this', but now I can look at Shibani's work from the outside, and have a clear perspective.

Now because I'm so away from it and so detached, I almost have the sense of a cinegoer directing a film. And I don't mean that creatively, I'm detached from owning it. I almost feel like I'm living in a flat that I don't own. So I will treat it really well because it's not my own, but I'm not hysterical about it. I'm not hysterical if you drop a bit of paint on my sofa, or if you clutter the kitchen.

I'm not hysterical, and so, I sleep better at night. And because of that, I'm calmer at doing what I do. And I feel I'm making, therefore, a far more honest film.

'I don't disregard the audience, but I've started to regard myself a little more' 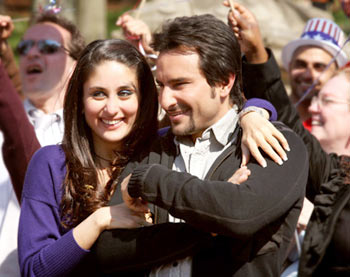 Do you feel your earlier films suffered from a lack of this clarity?

I remember Kabhi Alvida started with this really organic, honest space. And it went on to be slightly dishonest for me creatively, because I cluttered it with things that I felt I had to achieve to make a certain audience-space happy because I felt they would want it. I realise I don't have that feeling anymore.

I don't disregard the audience, but I've started to regard myself a little more.

You want to give them something in your own voice while you paradoxically realise your voice is only relevant if they want to hear it. As a filmmaker, isn't there an inevitable need to second-guess your audience constantly?

I think certain energies that have walked into my life have changed the way I feel. My editor Deepa -- I have to give her a lot of credit -- my first Assistant Director Karan Malhotra and my [cinematographer] Ravi Chandran are the three people who have taught me to think differently and achieve a certain result without, as you said, second-guessing a commercial response. I think when I sit with Deepa, Ravi and Karan -- who is I think an immensely talented boy -- they really are amazing at putting things into perspective for me.

I think I was in a little bit of a comfort zone earlier. Dharma Productions is a bit of a family run unit, and we're all a bit incestuous. And I think what I've done is cheat on family and venture out a little bit. And I think that's helped. That cheating and that infidelity to my organic organisation has helped.

'I think I was always an old soul, and skipped my younger days' 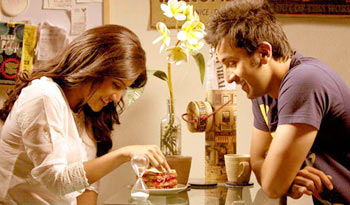 Image: A scene from Wake Up Sid

Has it been harder than usual, stepping out of that comfort zone and exploring not just a script written by someone else or working with new collaborators but making, consciously, a different kind of cinema?

Totally. I'm in a zone I don't know anything about. It's the only film I've needed external research for. Everything else was my understanding of human emotions, sometimes looking through rose tinted glass doors and windows, sometimes looking at urban relationships that I've absorbed, sometimes about friendships and people that I have seen in front of me.

This is the first film where I know nothing. I don't know these characters. I don't know anyone with Asberger's Syndrome, I know nothing about the global perception of Islam beyond the obvious that we all know and read, being evolved people. But the intricate details of the research actually opened my mind up.

It hasn't been that long, surely things haven't changed that drastically?

I think I was always an old soul, and kind of skipped my younger days. I never quite enjoyed the beats of being young. Like Ayaan keeps going for a drive in the night, and just hanging out. I didn't do any of this. I had friends, but I was always trying to work, and make myself into a certain kind of person.

I didn't do any of those things, so when he put things like that into a song, I thought that it would be boring. Today, when I look at that song, I feel that pinch that I didn't do it. So I know it's going to connect to people like me as well.

Watch out for Part 2 of the conversation with Karan Johar where he talks about Shah Rukh Khan, Bollywood stereotypes, and how Hollywood screenwriting gurus can't help our writers.