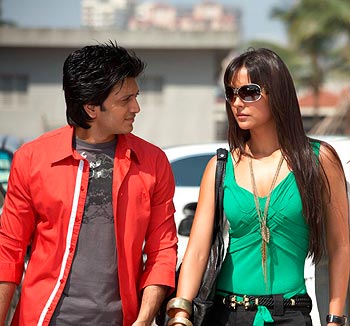 Image: A scene from Do Knot Disturb
Patcy N in Mumbai

Ritesh Deshmukh gets to test his comedy talent against comedy veteran Govinda in their new film together, Do Knot Disturb. Directed by one of the best comedy directors in Bollywood, David Dhawan, the film also stars Lara Dutta and Sushmita Sen.

Ritesh talks to Patcy N about the film and working with Govinda.

What is your role in Do Knot Disturb?

I play a simple person, who wants to make money through short cuts. He learns about Govinda's relationship with Lara Dutta even though he is married (to Sushmita Sen) and starts blackmailing him. During the course of the film, the characters get into a situation they try hard to get out of.

With so many actors in the film -- Govinda, Sushmita, Lara, Sohail Khan and Rajpal Yadav -- we had lots of dhamaal and masti. The film has been made well.

'Govinda is a better actor' 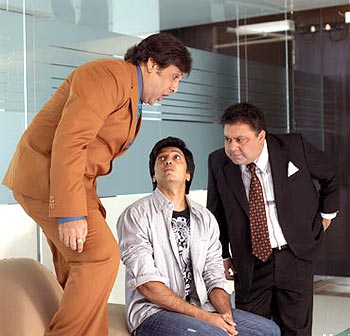 Did you ever feel that Govinda may overshadow you in the film?

Every actor should know where he stands. I am not an insecure actor. I know Govinda is a better actor; I don't compete with him. His work inspires me. If I understand this as an actor, I will not have any problems.

When I was working with Govinda, he made me feel comfortable. I was a bit nervous on the first day of the shoot because Govinda and Davidji have worked together in many films and I was new.

Govinda has solid comic timing and improvises a lot. Till the last moment, you will not know how he will deliver his dialogues, what will be his expressions... But the beauty is that you get to learn and experiment a lot. He makes simple lines sound funny because of the way he says it. And the way you react to his dialogues makes you look good on screen.

'Watch out for Lara in this film' 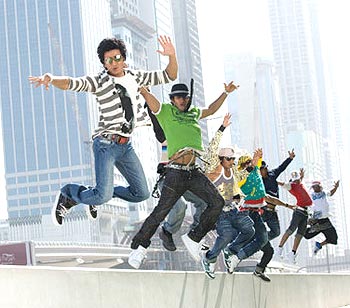 How much screen time do the women in the film have?

When you are working with actors like Lara and Sushmita, the film will be excellent. Normally, in a comedy film, women don't have much of a role. But in this film, they have a lot to do. Watch out for Lara in this film. She has done a good job.

Did Govinda and you ever talk politics?

No, never. My family is into politics but I don't discuss it openly. I met Govinda as an actor. We discussed our film.

'Davidji has his own style and sense of comedy' 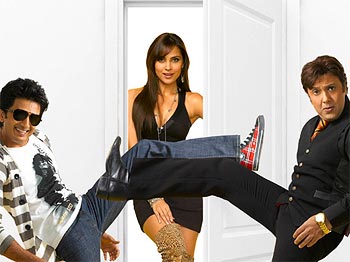 How different is David Dhawan from the other directors with whom you have done comedies?

I have done comedy films with many good directors. But my cycle is not complete until I work with David Dhawan. Davidji gave me the opportunity to work with the best actors in the business -- Govinda, Lara, Sushmita and Sohail.

He has his own style and sense of comedy. When you're saying a dialogue, you hardly get a director interrupting with, 'Abhi tang upar kar aur uspar daal de, abhi haatho se use pakad...' In between all that, you're trying to remember your lines. And then suddenly the cameraman calls 'cut.' Davidji asks why he cut the scene and the cameraman says, 'Sir, aap frame main hain.' These things can only happen on his sets!

On my first day of the shoot, Davidji explained the scene so well that I thought if he knows everything in such detail in advance, we should try sync sound in the film. So I asked him to try it out. But after I saw how he directs, I knew that the only person who won't be able to stay silent on the sets would be him!

'Vashu Bhagnani will stand by me whenever I need him' 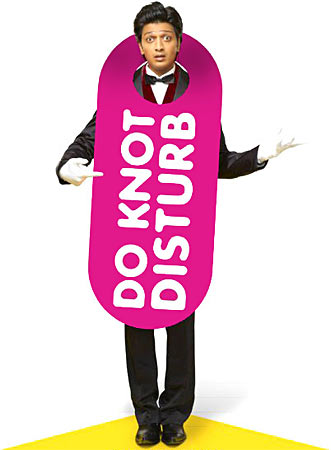 You are doing producer Vashu Bhagnani's next starring his son Jaccky.

Vashuji has believed in me and has given me one of my first films, Out Of Control. He will stand by me whenever I need him. Likewise, I will support him too.

Aladin is a fun film. Then I have Rann with Amitabh Bachchan, where I play a reporter. Then there is the romantic film Jaane Kahan Se Aayi Hai. After that is Houseful and Dhamaal 2.