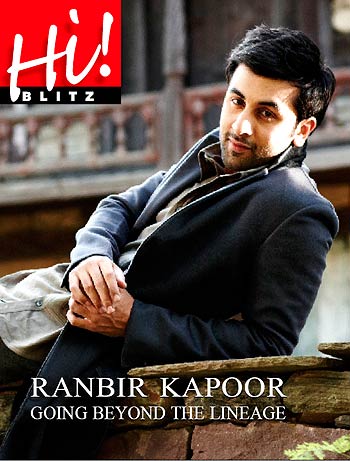 Ranbir Kapoor is the fourth generation inheritor of the Kapoor lineage. The younger child of hugely loved actors Rishi and Neetu Kapoor is steadily climbing the ladder to enter Bollywood's big league.

"I understand the frustration of a person who's not from a film family. The amount of struggle he has to go through, he has to work five times harder, but that doesn't take away the fact that I worked hard too. My foray in films may have been easier, I might get big banner films; people are aware of my existence and have certain expectations. They are downsides also; you are criticised more, your fall is harder, and the comparisons are inevitable," he explains his struggle.

In the world's largest democracy, where the Gandhis are looked upon as political royalty, the Kapoors are known for their historical association with Indian celluloid.

Rahul Gandhi is considered the future Prime Minister and Ranbir Kapoor, the next superstar in the making. To draw parallels between the Gandhis and the Kapoors might be rationale for scribes and commentators, yet it is the fascination of Indians with inheritance and values that overrides everything.

Ranbir Kapoor has never seen his lineage as a trap; he's quietly working to enhance his ownership of being a Kapoor. His last two films weren't box office hits, but one couldn't ignore the charisma he exuded on-screen; girls swooned over his towel act and critics were wowed by his acting prowess.

"I think it's the love people have for my family which has been contributing to Indian cinema for 75 years, so I am sure there's some good will which has rubbed off on me. It's a little bit of luck and faith that audiences and filmmakers have shown (in me), which is keeping me alive." 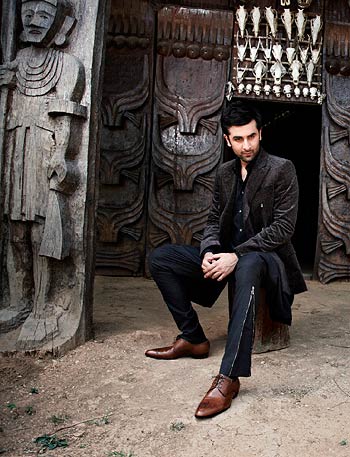 Hi! Blitz meets the actor in Bhopal where he's shooting for Rajniti, a high voltage political drama, playing a slightly negative role of a young politician.

His journey so far leading up to the silver screen has been an intuitive one. Schooling at Bombay Scottish, was followed by HR College and later at Lee Strasberg, New York. He returned and assisted Bhansali in Black.

The film was the complete antithesis to his new release Wake Up Sid in which he plays a 21-year-old. He was always a bit like lazy Jughead and goofy Archie, the teen characters from the popular American comic, but films were always at the nucleus.

Dressed in Louis Vuitton's Fall-Winter 09/10 collection, he gamely did the fashion number for Hi! Blitz in the rugged outdoors. He's a bit harsh on himself. "I think I am an extremely bad model and clotheshorse who does not understand high fashion and labels."

Ranbir and elder sister Riddhima, were sheltered from the extravagance of showbiz by their parents, Rishi and Neetu Kapoor.

Ranbir as a kid was notorious and often put his mom in embarrassing situations. "He would just run out of the class to play with the cats. He would go under the table, and once tried to look under his teacher's skirt. I was really embarrassed," Neetu tells the magazine.

"Being an actor, you have so much of something one day and the next day it could all be gone. You shouldn't take success for granted because there are 500 million people out there who are far more talented and don't get the opportunity. I have the opportunity, and therefore I should work hard and respect it."

Now that's the trait of a true-blue successor.