Inside the mad skull of Suparn Verma 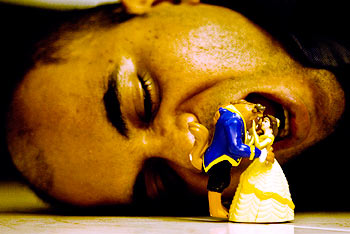 I will not review Suparn Verma's Acid Factory.

And no, this isn't just because the director once broke my little finger -- though one must admit the rest of the digits are rebelling against the idea of taking on the madman yet again.

Not that one of the most energetic filmmaker I've known ever needs actual provocation. The man clearly fell into a cauldron of Red Bull as an infant, and if you ever run into this wall-bouncing loon, just buckle up and hold on tight. 'Cause Suparn loves an audience, any audience. What better quality for a filmmaker?

We're sitting in a Delhi bar, less than a day away from his birthday, talking about his upcoming film (Which I'm not reviewing, by the way, only because I'm still out of town).

The idea is to ply the compadre with Delhi's finest kebabs and most easily accessed lager and loosen that lip. A dodgy plan, at best. Suparn doesn't need loosening up, and rattles off a long explanation about a chemical called Pentane that leads to temporary memory loss when I ask him about the origins of his film's title.

So it has nothing to do with, er, acid? The hallucinogenic kind? He guffaws loud and hard, startling our clueless bartender. Suparn goes on to recommend watching the film on acid, and then explains that it was quite trippy working with over a dozen smoke machines, and then blames all the intoxication on cobwebs, something they needed to recreate for the abandoned factory.

"Now the way cobwebs are made in films, is there's a chemical called glue." What people sniff? "Exactly! So glue is what they spray to make those webs. And if you are standing too close and they are making these cobwebs, trust me, you're going to be happy."

He laughs maniacally, his eyes gleaming as he describes crewmembers feeling dizzy and we both ponder about the fact that the very mention of glue brings sniffing to our minds instead of, well, sticking things.

'I just had to have Dia Mirza' 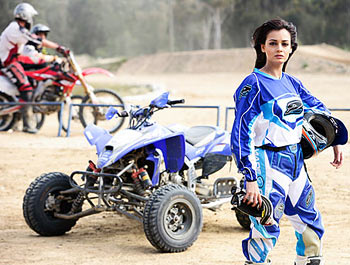 Image: Dia Mirza in a scene from Acid Factory

Six people wake up in a factory having each lost their memories, and the premise thrills the director no end.

"Ghajini excites you because it's about this guy who has temporary memory loss that keeps coming and going. But if you really wanna be a bas**** about it, you take every character in the movie and erase their memory. But erasing every character's memory sets up a challenge in terms of storytelling. You don't know where your characters are coming from, and you don't know who they are. So taking the plot ahead is a real, real challenge."

The film's story comes from writer Milind Gadagkar, and Suparn dismisses rip-off claims despite the fact that his producer, Sanjay Gupta, isn't a man known for his originality.

"I've heard a few films named, not one but a few, and I've seen a couple and I don't want to see the others because my film's finished. And honestly, from the idea I started with to the product I finally made, it's a big jump."

Verma and Gupta cracked the screenplay over a nine-month gestation, and the director claims he played havoc with the original idea. "The basic premise is a great plotpoint, but what matters is what you do with it."

The thriller is an ensemble film, a challenge to put together in an industry with a lamentably small talent pool.

"I had a few actors in mind. Danny, and Fardeen and Manoj." Verma wanted Sanjay Dutt, but that didn't work out and his role was rewritten for Irrfan Khan, who the director can't stop gushing about. Ditto for Dia Mirza, who he had reservations with.

"I told her that I see you as a delicate beauty, someone I want to protect. And you're just not a femme fatale." This spurned actress to get into the character's head and do a photoshoot, one that blew Verma's mind.

"I realised that she's completely understood the character, and I just had to have her." 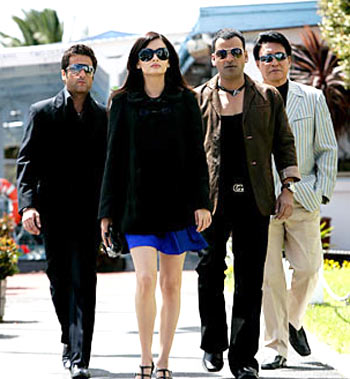 Image: A scene from Acid Factory

The final ensemble delighted him.

"Because every actor in the film is playing a character they've never played before. Dia I was shooting like I would shoot a man. Irrfan we know as a histrionic powerhouse, but here he's playing an action hero. Manoj went and completely reinvented his look, his mannerisms and I think that after Shool, Satya and Road, he's playing a character again. Dino's a surprise package; if people ask me my favourite Dino film, I'll say Acid Factory because he's never been like this. Fardeen and Aftab I pushed into a very edgy space."

And Danny? I ask recklessly, unmindful of just how drastically the man's name will make Suparn hyperventilate.

"Danny, for me... I'm a fanboy. I kept talking about Mere Apne till he got tired of it. I've portrayed him in the way I would love to see my idol portrayed: larger than life, lovely low-angle and wide-angle shots. And he had a blast."

He goes on about meeting Danny the first time, spending hours discussing both Kurosawa and the late Feroz Khan, and Suparn is clearly besotted by the veteran and his aura.

"I've experienced this kind of persona in Feroz Khan. He belongs to that school of thought where if they like you they love you and if they don't like you, don't be in the same room as them! It's as simple as that, either they're all heart or they don't care."

The group's dynamic was vital to this film.

"Because they're all playing characters who are struggling, fighting and surviving with each other. Now if they're insecure with each other as actors, they will try to be one up."

Verma broke the ice by making them read out their parts around a conference table till they relaxed, by the end of which the actors were actually hanging around the sets and even giving dialogue cues to each other. "They were genuinely having a good time."

"Of course," Suparn says, as if it's the most obvious thing in the world, "we partied like pigs."

'I'm a clown and I enjoy making people smile' 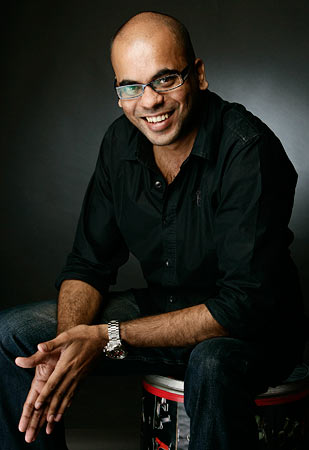 It is when Verma goes on and on about the mad partying, about "partying 8 hours, shooting 12 hours, sleeping 2 hours" and how his crew was always rejuvenated and ready "because you never get tired when you're having fun, only after it stops," that you begin to get an idea of the wild passion of the filmmaker and how the man clearly erases the line between business and pleasure. He is one fortunate enough to be in a business that, to him, is sheer pleasure, and he approaches both with equal, mad abandon.

It is also why he embraces the masala tag with much fervour.

"Honestly, it's a very slick, new-age, edgy masala. I'm here to entertain. I was the class clown; I was an office clown, I'm a clown and I enjoy making people smile. That's who I am. I cannot stand grumpy and serious and pull down people because I think it goes against the very grain of my being."

Strong words from someone who made his directorial debut with the noir-ish Ek Khiladi Ek Hasina, which starts with the hero getting shot. Verma bursts out laughing. "Yeah, but hello! Dude, it all works out in the end!"

EKEH was chock-full of references, to noir films from the Alain Delon classics right to Ridley Scott, both in terms of plot and visuals.

"I've tried to veer away from it this time. But in terms of technique, I've learnt a lot from watching serials like The Shield and The Wire, especially because they operate with 5, 6 cameras, all handheld, brilliant synchronicity. I'm a self-taught person, so I've tried to watch them again and again to figure out the edit graph and how much breathing -- breathing is what you call the movement of the camera -- is required in a handheld shot, and what is too much. So those things I internalised, yes. But unlike last time when I showed my DoP (director of photography) scenes, this time I showed him paintings or photographic stills." 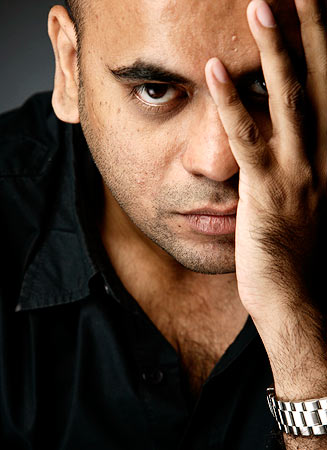 His DoP (director of photography) on Acid Factory is a new one, Sahil Kapoor, one who Suparn says has done an extraordinary job.

"My basic brief was cut the key light, I want high-contrast images. And then we went wild."

Verma's talk of axis-jumps and multiple-cameras makes one imagine he's a control freak, and he doesn't play that down at all. "We would fight on the sets to the point that Sanjay thought Sahil and I hated each other. But after pack-up every night, our rooms were next to each other and we'd drink till 2 in the morning in each other's rooms."

He talks about his gang with pride, speaking of how the other Verma on the set, veteran action coordinator Tinnu Verma, was "another madman, and brilliant technically."

His editor Hemal Kothari worked with him on EKEH, and the director calls him his right hand. "He understands what I'm shooting, the way I'm shooting it. And we speak the exact same language."

Suparn is all about camaraderie, something I am personally in a position to vouch for, and an old-school man in the Danny sense of the word -- if he likes you, be warned, you're in it for life. (The finger, by the way, was broken by accident -- not that Verma's devilish laughter ever since betrays any remorse. Grr.)

He's almost pensive as he talks about collaborators coming and going, and his wish to build a team that stays constant through different projects. A stray moment of silence is disturbed by our bartender flubbing up a bottle-toss and smashing a vodka bottle on the counter, less than a foot away from the director's face.

Suparn Verma explodes into hysterics, his persistently infectious laugh filling the room till he gets the clumsy barman to blush.

Filmmaking is like a circus. Some come and some go, but the show goes on, and, well, you just need the right freaks. "Yeah, it's as simple as that," he grins, a lets-not-wind-up glint in his eye. "And I'm a big freak. I'm the elephant."