Prem Soni is one lucky director. In his very first film, he has managed to rope in Bollywood's top stars -- Salman Khan and Kareena Kapoor. Not only that, he's also releasing his film Main Aurr Mrs Khanna on the Diwali weekend, a much-coveted Friday for most producers when the biggest movies get released.

Quite an achievement for for the first-timer, who lived in Spain for 17 years before he joined the Hindi film industry.

"I come from a business background," he says. "I had no connection with the film industry. But I've always wanted to make a film."

He decided to pursue his passion by getting the basics right. "I worked in television for more than a decade before I decided to do films," he says.

He spent two years writing on different subjects until he came out with the script for Main Aurr Mrs Khanna. And it was this script that attracted his lead stars -- and producer Sohail Khan -- to his film.

'I am not related to Priyanka Chopra' 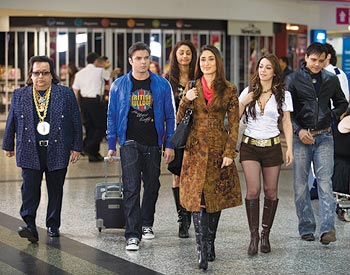 It was Priyanka Chopra who brought Soni's script under Salman's notice.

"She's a friend of mine and she introduced me to Salman," he says, dispelling rumours that the two are related.

As for Kareena Kapoor, Soni says that he goes a long way with the beautiful actress. "We have been planning to make a film together for a long time but nothing worked. I am happy that we finally agreed on Main Aurr Mrs Khanna," he says.

'Main Aurr Mrs Khanna is a sweet and romantic film' So what's with the word 'Main' in the film's title when Salman is playing the role of Mr Khanna?

"I have used the word 'Main' as both Salman and Sohail have a perspective about Mrs Khanna. They have their own viewpoint and therefore, the title Main Aurr Mrs Khanna.

"Though Salman is Mr Khanna, he looks at Kareena from his own viewpoint," he says refusing to divulge any more details about the plot. "I can only say that it is a very sweet and romantic film."

'Salman does not go through bad phases' 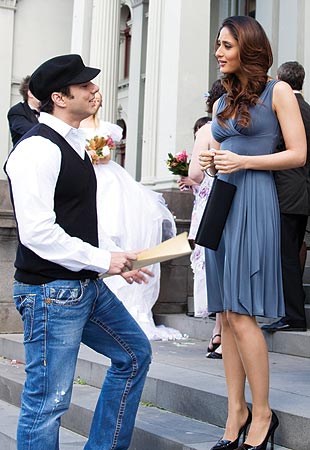 Does Sohail play spoilsport between Mr and Mrs Khanna?

And what's the deal with the promos showing flight boarding details? "The film is shot in Melbourne, which plays an important character in the film. The airport has some importance in the film too, that's why you see those arrival and departure signs," he says.

Asked if Salman's low career phase -- which got a boost with the success of his recent film Wanted -- is finally over, the director replies, "Salman is a superstar. He does not go through bad phases. Whatever happens, he is Salman Khan and nobody can change that. He has a huge fan following. Two flops don't matter to Salman's career. One hit will make him a superstar."