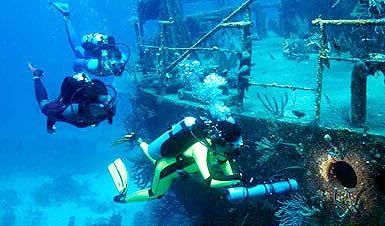 Image: A scene from Blue
Nithya Ramani in Mumbai

This week's release, Blue, has some great stunts and action sequences coming up. From Akshay Kumar swimming with sharks to bikes flying over trains, this Diwali release promises thrilling scenes.

And the man who made the scenes look good is Hollywood action director James Bomalick, who has worked in movies like Mr & Mrs Smith, Bad Boys II, The Fast and the Furious Tokyo Drift and Die Hard 4.0.

The Los Angeles-born director started his career as a bodyguard to singers. His fetish for motorbikes got him commercials and then, Hollywood films.

He tells Nithya Ramani how he styled Blue's cool action scenes. Read on:

How did Blue happen?

Anthony (D'Souza, director) caught hold of me two years ago. He had watched the films I was technically a part of. He had a script for me and said that I had to do all the action I have done on camera. I was game.

For Blue ringtones, wallpapers and more, SMS BLUE to 57333 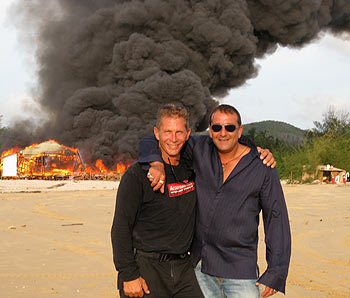 What kind of action will we see in Blue?

The film is about lost treasure, greed, double crossing and a lot of other things. The people in pursuit of the treasure include different characters like a rich man, a mercenary, a wild kid...

You will get to see bits of all my action movies in Blue -- actors riding bikes on a train, a truck exploding in the air, gun fights, fist fights, car chases, underwater stunts...

Which is your favourite stunt in the film?

All of them are my favourites. It's exciting to stunts where I can blow up 25-30 cars and bikes! I was given the freedom to go wild. I did whatever the budget would allow.

There are a few chase sequences. Choreographing them was difficult. These people were given sports bikes and they were riding in rubber plantations, dodging trees. That required a lot of planning and execution.

In the same way, it is very difficult to make a bike fly on top of a train and then make it jump on the narrow tracks and stay there.

'It is very difficult to train sharks' 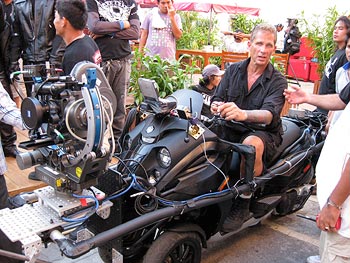 How did you shoot the underwater stunt with sharks? Were you apprehensive?

No way. If anybody told me that I had to go underwater everyday and do stunts with sharks, I would sign up immediately. What could be more exciting than this? Of course, we took precautions to make sure the sharks did what we wanted them to do.

It is very difficult to train sharks. Sharks respond to bait and food. So we placed boxes of fish where we wanted the sharks to go. With the amount of bait and how close they come, we can guarantee a level of excitement. They respond to natural stimuli and we manipulated it according to our convenience. We had dozens of specialists underwater to take care of the sharks.

How did you make the actors do stunts they have never attempted before?

I respect these actors for volunteering to do these stunts. I didn't make them do it.

Akshay trained a lot for the stunts and learnt how to dive. Lara Dutta didn't know how to swim, she learnt that. Underwater stunts always excite people and I must say, everybody stepped up and brought something to the movie.

After directing actors like Brad Pitt and Bruce Willis, how was it to direct Akshay Kumar, Sanjay Dutt and Zayed Khan?

Of course, there is a difference. But we discuss the script, plan and execute it.

Since this your first Indian film, what kind of research did you do?

I started my learning experience after talking to Anthony. I used to watch (Hindi) films and discuss them. I read up on Akshay and Sanjay before I met them. We became great friends later. I used to watch Akshay train in the gym. I approached them as people, not actors.

I grew very close to the stuntman Laxman. He was very helpful and guided me.

'Indian action films are not less than Hollywood' 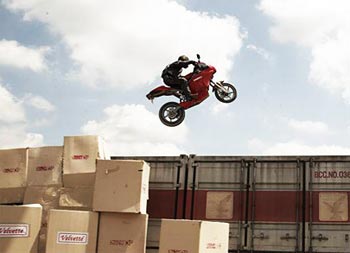 How different do you think action films in India are compared to Hollywood actioners?

In Hollywood, you direct stunt doubles, so it takes off some pressure on you. Doing an action scene with real talent is a lot of pressure. That's why I was so impressed because they (the cast of Blue) were game for it.

There was a scene where Zayed's double was to jump from the second floor. But Zayed told me that he wanted to do the scene. I was surprised. And he did it without wires. This would never happen back home. It was scary for me but we had everything ready in case of mishaps.

What was the most difficult stunt?

The logistics were challenging -- managing traffic and closing freeways was difficult. Trucks and motorcycles had to be moving at the same time, so we had to get it right. This was difficult because we were shooting in Thailand with three radios -- one in English, one in Hindi and one in Thai.

Underwater stunts are always difficult. You have to plan everything perfectly. Then you have to shoot 100 feet underwater everyday for hours. You cannot say you forgot to bring something and return to the surface!

'I would call Blue my best film so far' Have you learnt any Hindi?

Yes but you cannot publish those words! It's natural to first learn the bad words of a new language. They used to pull my leg by teaching me (bad) words in Hindi and Marathi and when I said it to someone else, they would laugh. I didn't really pick up much Hindi.

Any more Hindi films in the pipeline?

I am waiting for people's reaction to Blue. I look forward to working in this industry. Hollywood movies are more formulaic. Here, there is more heart and energy. There are traditions like breaking a coconut on the first day of the shoot or garlanding the camera. Nobody does this at home. It's quite cold and professional.

Was there ever a budget crunch? This is one of the most expensive films made in India.

We planned it very well. I gave the producers a list of everything I needed. But we're destroying so many cars, bikes, boats and houses, there's a train running up and down everyday -- all this doesn't come cheap.

I would call this my best film so far.