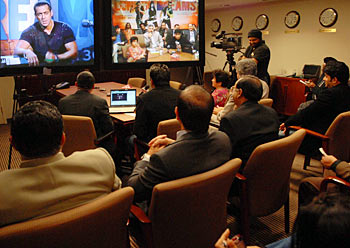 Salman Khan was in a good mood on Thursday during a video conference, making fun of himself and even taking in stride a silly request from a journalist asking him to take off his shirt.

He can easily do it in the movies but not during an interview, Salman seemed to say.

He gave himself high marks --- with that very mischievous look --- when a journalist asked how he rates himself as an actor.

The hour-long conference, organised by the distributor for London Dreams, Studio 18, was attended by director Vipul Shah, Salman's co-star Asin, and newcomers Aditya Roy Kapoor and Rannvijay Singh. Ajay Devgn, who was shooting for a film far away from Mumbai, could not make to the conference.

'I hope London Dreams is a big hit' 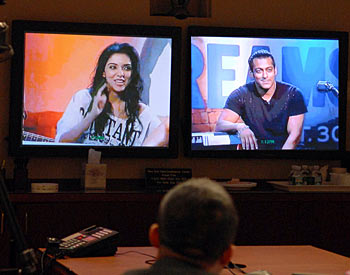 Salman said his charitable work was an extension of what he has been doing all the time but he is doing it more now, realising that there is more to life than acting and making box office hits. His detractors may say, he said with a wry smile, that he is doing it to offset the negative publicity he has received over the years. But he knows the truth, he implied.

He added that his thoughts on charity were instilled in his home, mainly by his writer father, Salim Khan. "The defects (to give away to charity) are in the family," he said with a broad grin. But he has been speeding the process because time is indeed short on earth. "You have a lifetime to dream once you are dead," he added.

Talking about his recent films, he said he enjoyed working for Main Aurr Mrs Khanna, which hardly anybody saw, he said. But he hoped that London Dreams would be a big hit.

'There is high energy and a lot of romance' 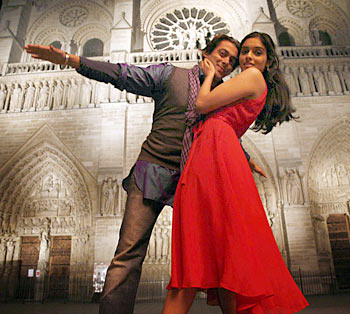 A story of friendship, showbiz dreams, rivalry for the same girl, it is basically a buddy film. "There is high energy and a lot of romance," he said, adding, "It is like a musical Sholay."

For Aditya, working with Salman was like doing a home-movie. There were times when Rannvijay and he would return to the hotel at 4 am after partying and would find the key to Salman's room, with food waiting for them next to the oven.

"The partying was obviously a secret; Vipul sir knows it now," he added.

'I don't think I was a good actor' 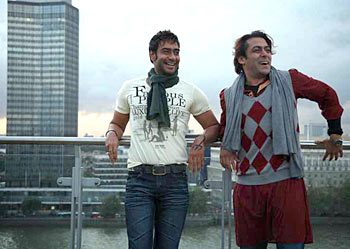 Vipul Shah recalled how he had started as a stage actor in Gujarati plays. His dream, over a decade ago, was to make Rs 1,000 per show. "I don't think I was a good actor," he laughed.

Shah, who has made several films with Akshay Kumar, declared that when he wrote London Dreams he had the current cast in mind and was lucky to get them all. He claimed that he had signed Asin before Aamir Khan's Ghajni released and became a blockbuster.

The film is about two best friends who have the same goals, Shah said. Naturally, jealousy creeps in. "Ajay's character becomes gray but not black," he says.

He added he had begun working on London Dreams before Farhan Akhtar's Rock On!! had released. The latter was 'made for a certain kind of audience,' he felt. His film, he asserts, 'caters to the whole world.'
More