Director Anjali Menon had shot into fame with her maiden feature film, Manjadikkuru, which was well appreciated and won two awards at the IFFK 2008.

Now she is back as the director of a 14-minute film, Happy Journey, which is part of the Kerala Cafe anthology.

Anjali has made several short films and documentaries and feels that it's one exciting medium where one is able to see the result almost immediately.

She feels that Kerala Cafe has been a great learning experience and that it was a wonderful sojourn for her.

You are not really active in the Malayalam commercial film circuit. So were you surprised on being invited to direct a segment of Kerala Caf ?

[Smiles] Not just in the commercial circuit, I am almost a newcomer in the film industry itself. I have just done one feature film, Manjadikkuru and that was not a typical Malayalam film. It has not even been released yet.

I am very happy with the attention that I received at the IFFK and was pleasantly surprised when Ranjith called me to be one of the ten directors for Kerala Cafe, especially since it was a great opportunity to work along with some of the best filmmakers in the industry.

'Happy Journey is not a feminist film' Image: A scene from Happy Journey

What is your film Happy Journey all about?

I don't want to give the plot away as there is a kind of suspense element involved. But I can say that it highlights a typical male-female relationship. It is an exploration of that kind and the various phobias related to it have also been incorporated.

In fact, when I did Manjadikkuru, I was rather surprised when many asked me why I had not done a feminist film. I don't believe in such segregation and was quite amused hearing it. Then I started thinking if I were to make a feminist film, what kind of film would it be?

Happy Journey is not a feminist film but it observes very closely what makes the male and female psyche. The concept of 'Men are from Mars, women are from Venus' is tackled in this film.

And judging by the reactions when it was screened in Abu Dhabi, the film has done well. I am extremely happy about it.

You have a rather unconventional cast of Jagathy Sreekumar and Nithya Menon...

I have not given the girl played by Nithya any name and Jagathy Sreekumar's character is simply called JK.

The whole story is set on a bus, during its journey from Kochi to Calicut. In the journey, the power equations become just the opposite by the time it reaches the end of the journey. A complete transition happens to the main character.

Jagathy Sreekumar has done the role extremely well. I think he has played the navarasa to perfection here. Nithya is perhaps not a trained actor, but the maturity with which she has shown is amazing. It's never easy to match Jagathy Sreekumar's energy but she has done a wonderful job.

'I am hugely excited about Kerala Cafe' 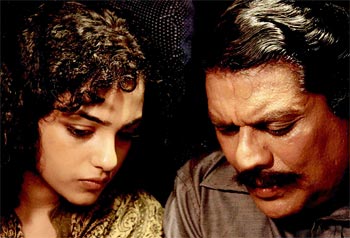 Image: A scene from Happy Journey

How was the whole experience of making Kerala Cafe?

Frankly, I was a bit worried initially since almost all my colleagues were really experienced in the commercial circuit. But it turned out to be a great experience and the spirit and the unselfish-teamwork that was to be seen was indeed amazing.

Everybody was working towards one single goal and I was absolutely impressed. I think youngsters have to learn a lot from this attitude.

Since this is my first theatrical release, I am hugely excited about Kerala Cafe and eager to know what the audience thinks about it.

Right now, I am writing a script that doesn't fit within the conventional form of a film and has a different structure.

Of course, there are the short films and documentaries for our own company happening in between.