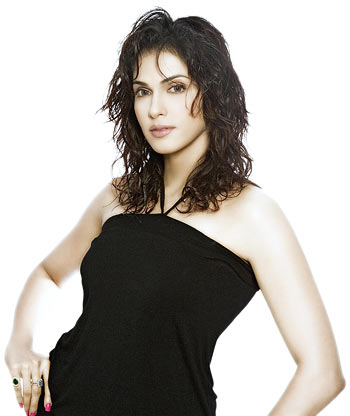 Following the footsteps of many Bollywood stars before her, Eesha Koppikhar has decided to extend herself to television once again after Nach Baliye. She will host 100 Percent De Dhana Dhan -- a wrestling reality show on Colors to be shot in South Africa.

De Dhana Dhan will pit Indian pehalwans with professional wrestlers from across the borders. It is based on an Argentinean show, Lucha. Indian wrestler Dara Singh will mentor the Indian wrestlers while actor Sharat Saxena will be a manager.

How did this show happen?

I got excited when I got a call from the production house of a sports-based show. I am passionate about taekwondo though my enthusiasm extends to all sports. The concept of having Indian wrestlers compete against foreign ones is unique and helps encourage the sport in the country. Wrestling, which is our age-old tradition, has got lost somewhere and needs to be brought back.

Why did you decide to host a wrestling reality show?

I am trained in martial arts and I love watching action -- live is even better. I've always wanted to be part of a sports-oriented show.

What does your role as an anchor entail?

My role is complex. I will be getting more involved with every episode. I play the coordinator between the two teams in terms of language. I am expected to observe the games and performances and help bridge the gap between all parties, the audience, the two teams and the mentors.

Watch 100 Percent De Dhana Dhan every Saturday and Sunday at 9pm on Colors.

'I am going to announce something big very soon' 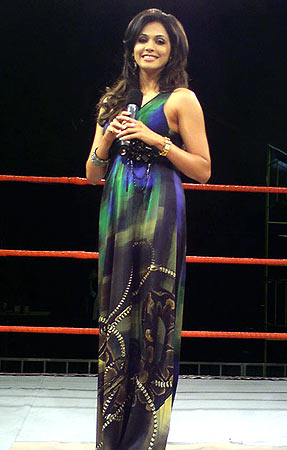 Are you a sportsperson?

Yes, completely. I have been a state-level basketball player, done gymnastics as a child and now am into martial arts for the last seven years. I am going to announce something big very soon and no, it's not going to be my wedding.

How much do you know about wrestling?

I have seen WWE [World Wrestling Entertainment] and I have few favourites like The Great Khali and Undertaker. This game is about skill and brains that teaches you the techniques of self -defence. I came to know the names of the desi players only after coming on the show. I am well versed with moves like drop kicks in martial arts. And that's the same in wrestling.

'It's fun because I have never dealt with wrestlers before' 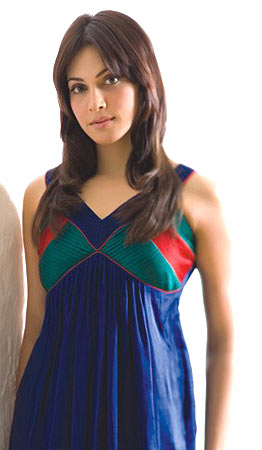 How was the experience shooting with heavy people?

It's been good because I don't have to lift them, you know [laughs]. I have still not gotten to know everyone. But they are humble and shy because they have come from small towns. They may be huge but they are babies in the age group between 20-25. While shooting they suddenly start laughing when they are not supposed to. But it's fun because I have never dealt with wrestlers before.

There is Gania from Kholapur, who loves eating. Looking at him eat ice cream I have stopped eating sweets [smiles]. There is another guy called Sangram Singh, a sub-inspector from Haryana who has won a gold medal but nobody knows about it. He has been wrestling for the last 10 years. There is a South Indian guy called Anna, who told me that he has watched my films. This show will give wrestlers an exposure to next level, may be even enter the WWE.

How is the South African public?

They don't understand the language but sometimes they favour the Indians. They start hooting or booing for South African wrestlers, which is really weird.

'This show will be for wrestling what Chak De! India was for women's hockey' 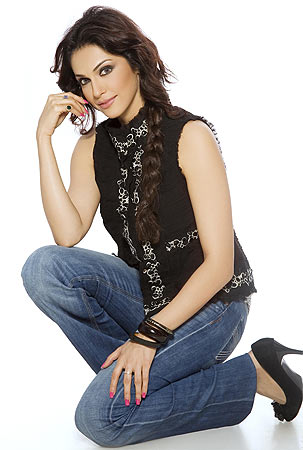 WWE is entertaining and fun. Do you think viewers will enjoy this show as well?

De Dhana Dhan has all the elements of entertainment. Wrestling as a sport in India has always intrigued people but it has not received the recognition it deserves. With this show we would like to revive the interest of viewers across all age groups. This show will be for wrestling what Chak De! India was for women's hockey.

Which are your forthcoming films?

I have three films -- Right Ya Wrong, a suspense thriller where I play a grey character. Then there is a comedy, where I play a Haryanvi cop. This will be my first comedy in a long time after Kya Kool Hain Hum. The third is Ram Gopal Varma's Shabri where I play a gangster.