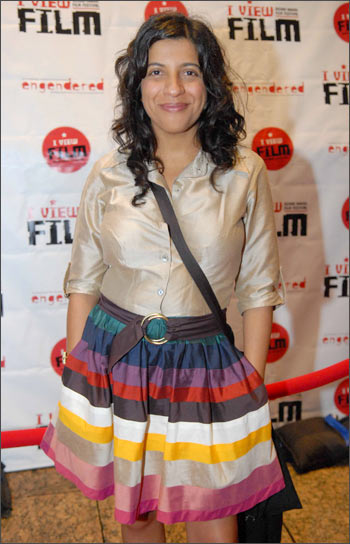 Director Zoya Akhtar had a series of interviews at the I View film festival at the Asia Society on August 28, where her directorial debut Luck By Chance was screened. But Akhtar sedulously answered a great many questions from rediff.com about her film, about the Hindi film industry, her motivations, influences, her talented family, and more. All this, with only the odd few moments of irritation.

A graduate from Mumbai's Maneckji Cooper High School and St Xavier's college (where she graduated in literature and sociology), Akhtar also has a diploma in film direction from New York University. Akhtar, who has written, directed, cast, and acted -- even doing a bit part in Kama Sutra -- is as averse to be pigeonholed about the kinds of film she likes as she is when describing the female perspective in filmmaking.

An omnivorous reader, who mutinously refused to be typecast in her choices ("What is this type, type that you have."), she admits that she reads a lot of Indian authors, the classics, and that she really goes for the pulp of James Hadley Chase ("I love him").

Here she is, in an interview with rediff.com's P Rajendran.

You finished Luck By Chance, and were planning Kismat Talkies. Is there some underlying theme in your films involving fortune?

How did working as a casting director impact your work in Luck By Chance?

I did a lot of jobs. As an AD [assistant director] and as a PA [production assistant] -- I worked as a casting director, I casted extras -- as an AD you work with extras a lot. I was an executive producer. I've done a lot of jobs and I think each one helps you get closer to what you want as a director. It also helps you -- when you work with different filmmakers -- to absorb, to adapt, to know what to watch out for, to know pitfalls. I mean, it all helps you.

So many people have had the same experience. Why do you think you are able to provide the nuances that they cannot?

I'm obsessed with people, I'm obsessed with human behavior. I just watch people. I'm a writer, so I like nuances. God lies in the details. I just know these people. I've grown up in the film industry and I've been watching them, analyzing them, laughing at them, totally understanding them and getting their point of view, and, at times, taking up for them. So I'm part of it and it's part of me. When you make a film like this, you can't have judgment. You have to have compassion.

You have written songs for Bride and Prejudice that don't have the same nuance -- although, of course, that film is different in tone. But could you tell us about poems you write [that are not for public consumption]?

I haven't in a while but I used to. Yeah, in English. 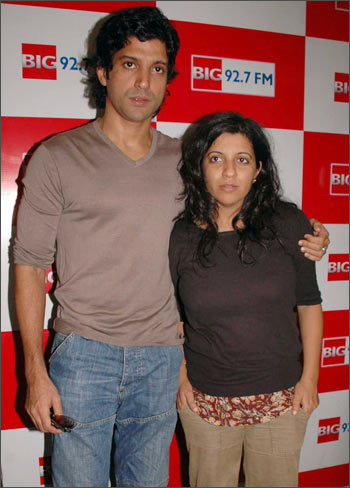 No. But now I look back at them they are rather amateur and angsty and teenaged. I haven't written in a while and it's something that I've got to consciously start to do. I don't know if I'm good or bad but I know I can. It's something that I need to make an effort to start doing.

But you want to write in English, right?

I don't have an option.

Your father has worked a lot using the Urdu [and Hindi] medium. You understand Urdu, don't you?

How is it working with your brother?

You have worked with director Reema Kangti in Honeymoon Travels Pvt Ltd. She directed Farhan in the same film. And she's a second director in Luck By Chance where you are the director and Farhan the executive producer. How does this arrangement work?

How did the idea come about?

Well I had many ideas when I was writing but this is the first one I penned from start to finish. It was very easy for me. And I think first films are usually about what you are close to, what you know. And I think it was easy for me.

There were a lot of inside jokes in the film. Did you put them all in or did the actors you brought in provide some?

A lot of people ad-libbed certain things. I was very aware of the things I had to take out of the film, more than what I would have to keep in the film. There's a lot of stuff in the industry that's so over the top and so funny that you feel you should put it in the film. I am of the belief that if I put this really in the movie no one's going to buy it and they're going to think I'm spoofing -- because it's so over the top. So I was very careful to tread that line. I knew it may be delicious but it was not going in the movie.

'Film was a huge part of growing up' 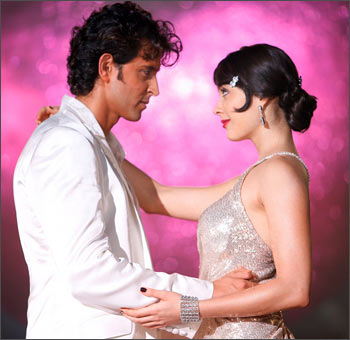 You wrote the script for Luck By Chance in English but who translated it for you?

Like a lot of Rishi Kapoor [who plays a producer]. And the entire acting class [where Saurabh Shukla, playing the coach, among other things says the Hindi film industry calls less for underplayed acting than 'energy']. That was all him. A lot of stuff has come from him.

He knows these people. He knows producers like [the one] Rishi Kapoor [played]. I've heard of them, I know them, I meet them, I meet them at parties, and they're like, 'Hello, uncle.' I don't work I don't have a one on one experience with them. He does. He just layered that [scene] perfectly for me.

What have you learned from him -- and your mother [actor and writer Honey Irani]?

About scripts, about characterisation, about film. My mother was in FTII (the Film and Technical Institute of India), so we watched tons of movies. She's a collector. She's got a crazy amount of film. We were exposed to a lot of movies, not just American movies -- foreign films.

Could you tell me something more about your mother?

See, she was a child star, though by the time we were born she had stopped acting. She was a very young mother. I was born when she was 18, Farhan when she was 19. So she was a lot of fun. She was with us for a couple of years and then she went to film school. And then she started working. She had a projector. We'd see films on our wall.

So film was a huge part of [growing up]. But she was very outdoorsy. We learned swimming with her. We did all the outdoor things -- camping and going to Goa. She was very hands-on. She's really been a friend. She's been a buddy to both of us.

What did you learn from her? Would you have any anecdotes?

You can't take one thing -- that I learned this from her. It doesn't work like that. You know your parents write and every day you can go into their study and they are sitting and writing. It suddenly becomes a viable thing to do -- when you're a child. [You realise] you can actually write. That's what they do for a living. So that's the biggest influence -- to see scripts and see papers, hear discussions. But there's no one particular thing.

Who would you consider your favourite director?

'Salaam Bombay had a huge influence on me' A lot of people have told me that [my work is] similar to Robert Altman's. Which, I guess, it is, because I like him. I also love Martin Scorsese. I don't think he's influenced Luck By Chance in any way but I love him. But Pedro Almod Var, I think yes.

You plan to make films like any of them?

[Shortly] No, I plan to make whatever idea turns me on. I haven't decided I'm going to make this type of film. Whatever makes me happy at that point, I'll make.

So what are the kind of films that do make you happy?

Would you like to make an English film in India?

Yes. If the story needs to be in English, I'd love to do it.

No, I am writing something that will have a lot of English in it but it can't only be English.

Could you tell me something about that?

No. Not yet [laughs a little apologetically].

You also did a role in Kama Sutra, right?

Well, I was an AD. Sometimes you need to fill the frame, the assistant director jumps in. So I was an extra there.

How was it working with Mira Nair?

Could you tell us what you liked about her work?

Mira's got serious attention to detail. She's good with actors. She's got a very strong aesthetic. She's got a very strong eye in terms of colour, composition and design. That's very strong with her. Her films touch you (pointing emphatically at the heart). So she's not afraid to go there, you know. And she's very articulate. It was very good to work with her. Salaam Bombay had a huge influence on me because I was in my teens when I saw it. And I was, like, I have to make movies -- when I saw that film. She was the first director I worked with.

So what do you think of women as directors -- as opposed to men?

I don't think of all this. 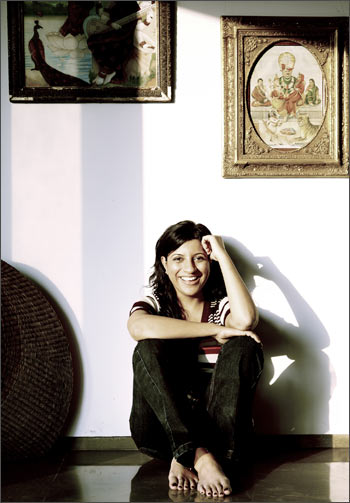 Don't women, say, bring a less macho aesthetic into film than men? Like your mother did when she wrote Kya Kehna [about an unmarried woman who decided to keep her child].

Yes, but I've got my cousin [choreographer and director] Farah Khan, who's very much [in the mainstream]. It's what you want to do. It's not gender specific. There are male directors that have made really beautiful women's stories.

If you take the statistical average, say, women have provided rather different voices. I was asking you about that. You don't find a distinction?

No, you know, I don't think like that. I think there are good filmmakers and bad filmmakers. And whose voice you are projecting doesn't' make a difference if the film's bad -- to me. You're either good or you're bad and that's really not gender specific.

Can you speak about experiences as an assistant director that may have helped you later?

You yourself are not known to be very autocratic, right?

No, if I need to be, but I don't need to be because my crew is very professional.