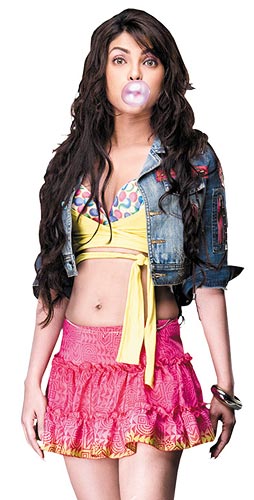 Playing 12 characters in a single film is quite a mean feat, and Priyanka Chopra knows that. So she made sure she did her homework well for Ashutosh Gowariker's What's Your Raashee.

The actress explores each character in each sun sign, and tells Patcy N the work that went into it.

Kajal is very vivacious and fun-loving. She is 20 years old, and goes to college. She wants to get married because she does not believe in flirting, dating and affairs.

Since she's a typical Mumbai college girl, I had to be very energetic. I had fever and high temperature when we were shooting Kajal's scenes. To keep up that energy and bubbliness was very tough. 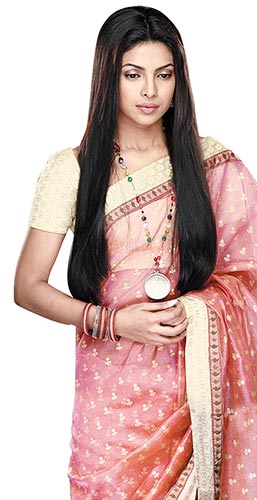 Hansa is Cancerian and so am I, so I could relate to her. Hansa is beautiful, young, mature girl. She tells Yogesh [Harman Baweja] that she has been in a relationship before because she feels every relationship must start with honesty. I loved her confidence and integrity.

How Priyanka did it: While enacting her, I had to make sure she was sad but her integrity had to come across too. She's very silent so I had to perform with my eyes. I had to underplay a lot.

Mallika is a dancer and so she's very elegant. She raises money for various social causes and is very proud of her work.

How Priyanka did it: In this film, we're not showing that every girl is an exact representation of her sun sign. They are different people with different personalities and a few similar traits. 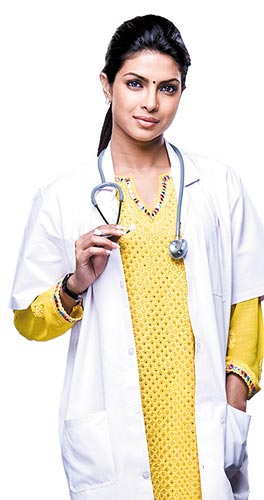 I loved playing Dr Pooja Goradia. She's a typical Virgo -- very honest, dedicated and intense. She wants to practice medicine in India because this is where she made it.

How Priyanka did it: I fashioned Pooja after my mother, who is also a doctor. My childhood memory of my mom is her in a plait, kajal in her eyes, a bindi and a stethoscope around her neck.

I gave Pooja a ponytail instead of a plait because another character has plaits. I've given her a simple salwar kurta and stethoscope around her neck, just like my mother.

I gave Pooja the confident walk that my mother has. Yet, she is very gentle. 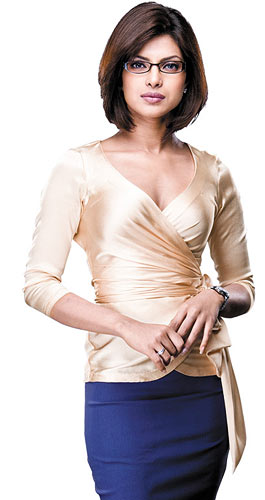 Rajni is an architect. She is very overbearing and thinks the world should go her way because she has worked really hard to reach where she has.

She believes the man she marries should understand her requirements and fulfil them.

How Priyanka did it: I gave her a blunt cut because she is a no-nonsense girl. She is the most dominating character in this film.

My clothes and hair were the least of my problems in this film. The most difficult part was remembering the girls' personalities and their body language! 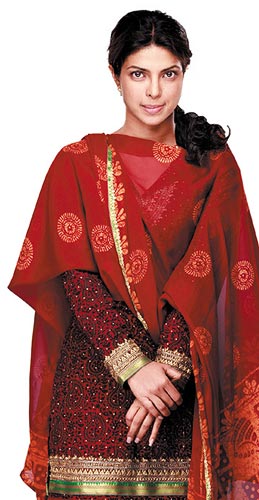 Nandini is amazingly funny and confident. She comes from a very orthodox family. She wants Yogesh to marry her because she wants to go to Chicago and become a model.

She's very endearing and eager -- anyone would like her. She had big curly hair and tries to be someone she is not.

How Priyanka did it: Harman is a Scorpion, so I got the personality traits from him. 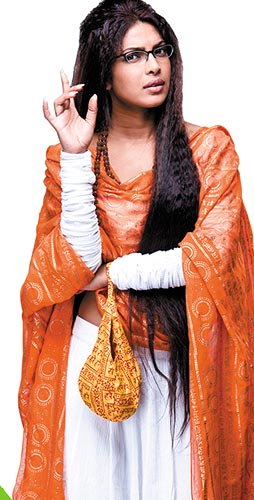 Bhavna is brilliant -- she has a PhD in Sanskrit. She's far removed from me as a person, and so was a difficult character. Astrology is her hobby -- she speaks in planetary language, which I have no clue about. She's always into kundalis, rahu, ketu... I was completely lost when I was reading about Bhavna.

How Priyanka did it: Bhavna is an educated Gujarati girl. The characters could not come across as caricatures, so I had to portray Bhavna as one who really believes in what she is saying.

Bhavna's sees Yogesh's kundali and sees a problem. The only solution is pre-marital sex -- this will come as a shock for the audience, as you will not think she'll say something like this when you see her. Even though she talks about sex in her very first meeting, this is also the first time she tries to seduce through a song. So I had to have the proper balance. 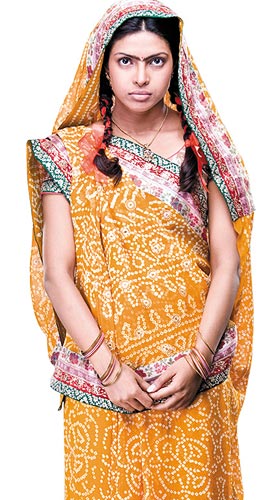 Jhankana was the most difficult character because she is 15 years old. Since there were no special effects or prosthetics, only body language and the way I talked would make me look younger.

Even though Jhankana is 15, her parents portray her as 19.

How Priyanka did it: To prepare for the role, I just had to remember the way I was when I was 13 to 15 years old. I would cry like I did when I was 15. I didn't rehearse for this character, we just shot it.

I made Jhankana jittery and nervous. We gave her a unibrow. 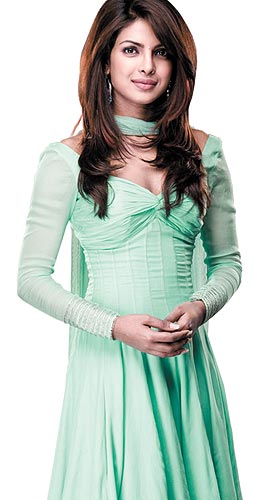 Sanjana is charming, dreamy and graceful. She is an NRI from Kampala, Uganda. She has a slight accent -- a mix of African and British accent, as she studied in a British school. She tells Yogesh that she is love with someone else.

How Priyanka did it: To get my accent right, I would talk to a girl, who was a Gujarati from Kampala. She would say my lines and I would try to grasp that. She had an accent only when she spoke in English, not when she spoke in Hindi and Gujarati. 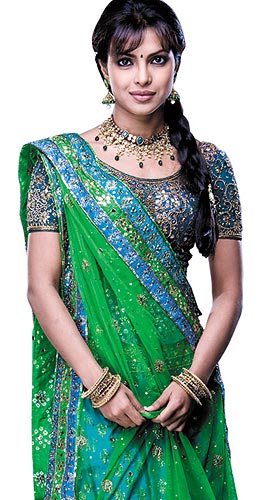 Chandrika is a rich and soft-spoken, and comes from a conservative family. She believes in reincarnation and that Yogesh is her husband from a past life.

How Priyanka did it: It was difficult to portray this character as she really believes that she was married to Yogesh. She 'recognises' him after seeing his photograph in the newspaper. She's funny without being funny.

There are 13 songs in the film. Twelve of them based around characters, so I had to dance and enact differently in all of them.

Out of the twelve characters, Sanjana the Aquarian was closest to me. 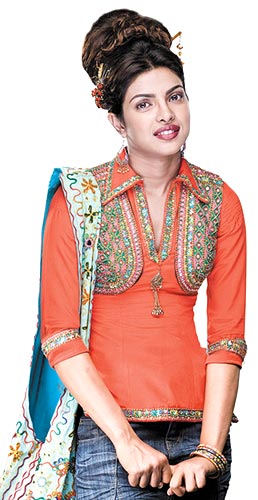 The most fascinating thing about Anjali is her innocence. She tries hard to be cool, as she is meeting an NRI boy [Harman Baweja] and she really wants him to marry her.

She is a girl from Unjha, Gujarat, and has never been to an English-medium school. So she tries to learn as much English as she can. This is the first time she wears a short skirt as well.

How Priyanka did it: I had to forget that I was educated in an English-medium school and that I speak English. I had to understand how it would be if I was thrown into an environment where I don't know the language and culture. It was important for me to not to come across as a smart woman, who is trying to trap this guy into marrying me. That's why I gave her a hunch to look under-confident.

But despite the fact that she was trying to become somebody else, her innocence had to shine through. That was difficult for me. Yet, Anjali is one of my favourite characters. The way she laughs is fashioned after one of my cousins, Pooja. She used to laugh like that as a child. 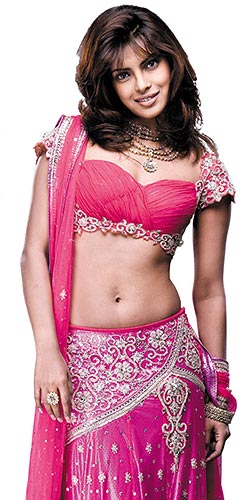 Vishaka is the daughter of a cotton king. She is 21 years old, and very rich. She wants to marry a simple guy because she wants to lead a simple life. She's a crackpot. You'll find her weird when you meet her for the first time. But she is very spirited.

How Priyanka did it: I felt liberated while playing Vishaka. I felt free.

Each role was tiring because I had to be careful that none of the characters' body language was similar. I did not have the help of prosthesis, where they could make me look different - make my nose bigger or make me fatter. All the characters were in the same age group, and even in make-up, there wasn't much change. Only the body language and hair were dramatically different in all the characters.