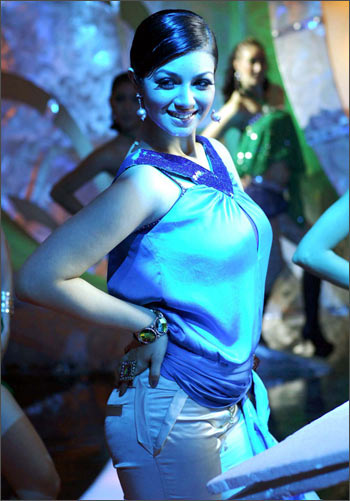 Ayesha Takia Azmi seems keen to prove that married women can have their fan following and career intact as well as the fair maidens of Bollywood.

Her new film Wanted, opposite Salman Khan, releases this Friday, and seems to be quite a September attraction.

This is your second film after marriage. How does it feel?

It feels great. It is a good film to release at this point, as it clears misconceptions like I am not doing films. I am. I have been modelling since I was four years old so facing the camera is second nature to me. It's something I want to do all my life.

I'm very excited about Wanted. It's come out fabulous. I have seen the film. I think people will love it.

What is Wanted about?

It is a masala film -- an action film. Salman is doing action after a long time. It has great music and a lot of dance, since Prabhu Deva is the director. It's not mindless entertainment, there is a serious story to it.

I play Janvi, a simple and naive girl. It's when she meets Salman's character that she realises that there are things that happen that she hasn't even thought of. So there is a big transition in her life.

'Prabhu Deva does get angry once in a while' 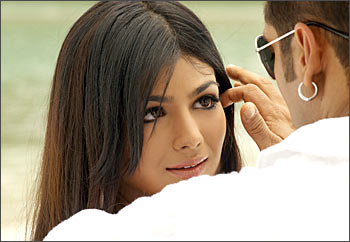 You worked with two very contrasting people -- Prabhu Deva is a man of few words while Salman Khan is known as the 'bad boy of Bollywood'. How was it working with them?

It's always great working with contrasting people, who mix together, become a team and get excited about the film. They were very enthusiastic and gave their best.

At first, Prabhuji didn't say much because of the language barrier. He doesn't speak Hindi. But when you get to know him, he loves to joke. He has something to say every two minutes. He always has a sweet smile on his face. But he does get angry once in a while.

I am a director's actor, so after a few days, I figured out a way to communicate. I made meticulous notes of the details that he mentioned on and off the sets. I listened to him carefully and followed what he said. If you give him exactly what he wants from a scene, he is very happy.

It was great working with Salman. He doesn't come across as the 'bad boy of Bollywood'. He is a very generous actor. There are actors, who don't let you have your space on screen and try to steal it. But Salman is not like that.

Have you watched the original Tamil film, Pokkiri?

Yes. I have watched the Telugu film too. But Wanted is the best. It has been modified for our audience. It is a great and entertaining story.

'There are many married actresses' 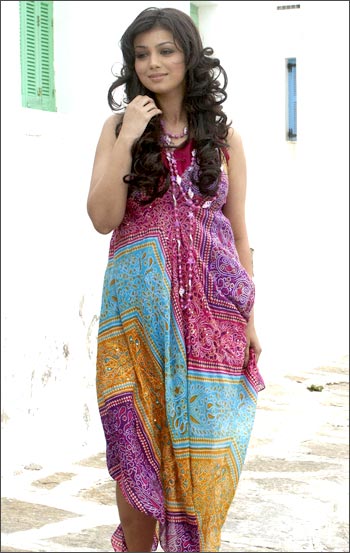 What was your reaction when you were approached for a Prabhu Deva film?

I was terrified initially because I thought I would have to dance to his choreography. But I love challenging myself. I made a fool of myself a couple of times and messed up the dance steps completely. It's scary to see him perform. Even when he dances without music, he's frighteningly awesome. He is so talented that it is scary to dance in front of him.

Both. I would love to work with him again.

It's the same. I'm the same. I don't why people ask me this and react differently to me. I've been with Farhan for five years; we were mentally married already. I am as spoilt and weird as ever. I don't find anything different.

The industry feels that married women don't have a career anymore. What do you think?

I hope that changes in 2009. Many of our heroes are married and people don't even question that. I know it's a male-oriented industry but it's high time people change their perception. There are many married actresses. Hopefully, things will change and people will open their minds.

'If I had to copy someone, it would be someone like the legendary Sridevi' 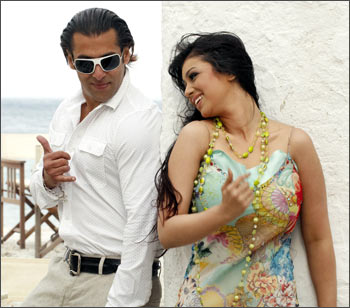 Apparently, the Wanted shoot got delayed because of your wedding this March.

That is not true. I have never let my personal life and choices interfere with my professional life. I am a very professional actor. In fact, I have postponed my personal things to make sure it doesn't disturb anybody's schedule.

Nagesh Kukunoor once said you are a very instinctive actor. Since you watched Pokkiri, did Asin's character interfere your performance?

Not at all. I don't plan my acting. If I had to copy someone, it would be someone like the legendary Sridevi. I am really bad at copying people. I am very spontaneous.

'Farhan hasn't watched many of my films' 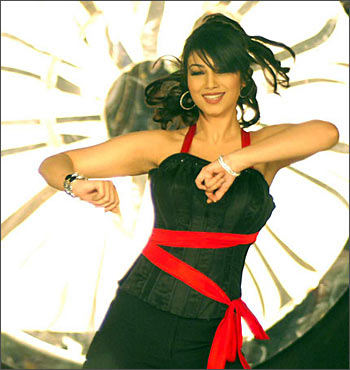 Your sister Natasha plans to make her acting debut. Have you given her any tips?

Yes, I'm very excited about it. I keep telling her to be professional. The best advice I can give is that when you come home, forget that you are an actor -- just live your life like any other person or else you will lose the essence of life.

Did your husband Farhan watch Wanted? What was his reaction?

What are your plans for the future?

I am starting a clothing line with my sister and mother. I will join (restaurateur) Farhan in his business. We will expand our restaurant, Cafe Bassilico, and open a chain of cafes called Chai Coffee. We plan to open a cafe in Goa as well. I am glad that he's so experienced in his business at such a young age.