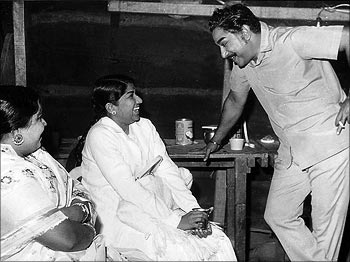 Image: Sivaji and Kamala Ganesan with Lata Mangeshkar at the play, Thangapadakkam

Not many know that the legendary actor Sivaji Ganesan was a rakhi brother to both Lata Mangeshkar and Asha Bhosle, and their families have long shared a close relationship.

As we celebrate Lataji's 80th birthday on September 28, Ram Kumar, Ganesan's elder son, remembers the decades of long friendship with the Mangeshkar family:

In the 1950s, Sivaji Productions produced only Hindi movies. Both Lata Mangeshkar and Asha Bhosle had sung for the films, but had never met my father, Sivaji Ganesan.

When Ashaji was in Chennai, she happened to watch the Tamil film, Paava Mannippu. When she returned to Mumbai, she told her family that they had to see a Tamil actor called Sivaji Ganesan. So they watched Paava Mannippu at the Aurora theatre (in King's Circle, north-central Mumbai). It was the first Tamil film that they had seen.

During the interval, they realised all of them were crying even though no one understood a word of Tamil. All of them felt he (Sivaji Ganesan) reminded them of their father Dinanath Mangeshkar.

The next day, they contacted my father through HMV (the music label) and flew to Chennai to meet him. They came home, hugged him, tied rakhis and started crying.

From the first meeting itself, everything enjoying each other's company, laughing and talking. My mother didn't know English or Hindi. Yet, we would see Lataji and Ashaji talking to her for hours -- my mother in Tamil and they in Hindi.

They were very close. They would shop together and spend a lot of time together.

As told to Shobha Warrier

'We hope Lataji continues singing for a long, long time' 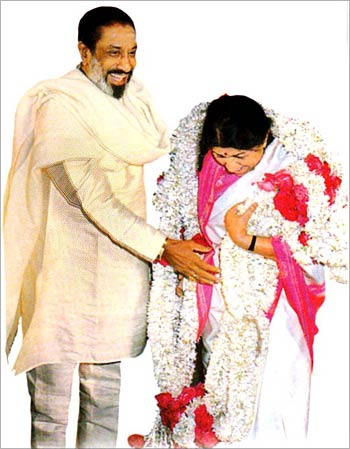 They used to come and stay with us often.

I have heard a story that happened in 1960-1961. In those days, my father used to hunt. Somebody had sent some cuckoos to my father, as they are supposed to be a delicacy.

When Lataji got up in the morning, she heard the cuckoos singing. When she asked about the birds, somebody told her that they had been brought for her to eat. She got so upset, she started crying. She opened the cage and let them fly away. My mother and grandmother watched quietly.

When my father woke up, she told him, 'Anna, I am called the Nightingale of India, how can you, my brother, do this? Don't ever eat them.' My father never ate bird meat after that.

I'll tell you another incident that my father told us. Once the radio was playing P Susheela's song, Athan Ennathan. My father asked if they could sing like that. Lataji kept quiet.

After six months when he went to Mumbai, Lataji asked him to come home as she had something important to say.
When he reached her house, both sisters started singing Anthan Ennathan. Lataji said since my father had asked them if they could sing as well as P Susheela, they sang the song in Tamil.

My father laughed and said, 'I know you are the greatest. I just teased you that day.'

They consider P Susheela one of the greatest singers in India. They have always had high regard for our (south Indian) singers. They used to have a high opinion of Ilayaraja. Now, they are great fans of A R Rahman.

Now that my parents are no longer here, I look up to them as my closest people. I tell them that they are my father and mother. I am close to both of them -- closer to them than I was with my parents.

The way they call Ramu in their sweet soft voice, it is like God calling you.

I have lunch with them quite often and the three sisters (including Usha Mangeshkar) treat me like their nephew.

Ashaji loves cooking for me, as I love food. The food that they make is delicious, especially their biryanis. Ashaji is an excellent cook. Whenever I visit her, she tries new recipes on me. They are foodies like us.

I discuss everything with them. Ashaji used to say that I would become an actor. But I didn't, my younger brother Prabhu did. Even now, she says, I should have been an actor!

They have not missed a single wedding in our family, except mine. But that was because there was an accident and their brother Hridayanathji and his wife Bharatiji were injured. After two weeks, Ashaji and Lataji came and gave me presents.

One festival that our families never miss is Diwali. The tradition started in 1960-1961 and continues today. We never miss exchanging clothes on Diwali day.

Whenever they have a function, they invite me. When Rahman did a concert for the Dinanath Mangeshkar Trust in Pune, I was with them.

Lataji once sung Maine Pyar Kiya for my twins when they asked her to. That was the first time I heard her sing at home. My father teased her, saying, 'You never sang a song for me. How come you are singing to my grandchildren?'

I always call them on their birthdays and wish them. I remember attending Lataji's 75th birthday function. This year, she will be 80. I will be there and have food with her on that day.

We hope she continues singing for a long, long time. I wish her a glorious 80th birthday.