Prabhu Deva: I'm not here to show my talent 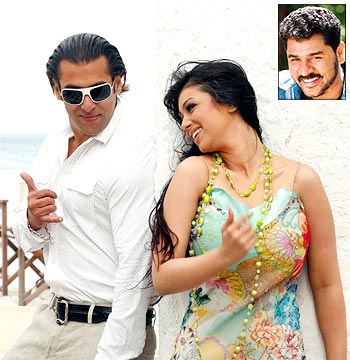 Image: A scene from Wanted
Nithya Ramani in Mumbai

Besides being a good actor, Prabhu Deva has already proved his phenominal dancing skills. He has also proved his great directorial skills in his Tamil film Pokkiri -- remake of the Telugu film directed by Puri Jagannadh -- has become a huge blockbuster.

Now, he's set to prove that he can direct well in Hindi too. Pokkiri -- remade as Wanted -- releases this Friday. It stars Salman Khan, Ayesha Takia and National Award winner Prakash Raj.

Prabhu Deva chats about his experience of directing a Bollywood film, making Salman dance and much more.

How did Wanted happen?

Boney Kapoor wanted to make a film with me for the past four years. But we didn't know what to work on. The first thought that came to our minds was a romantic film with Salmanbhai.

Once Pokkiri was released, Boney showed the film to Salman. He loved it and that's how Wanted happened.

Did you always think of Salman in the cast?

It was Boney sir's idea. He wanted to do a film with Salman. I consider it an honour to work with Salmanbhai.

Why did you want to remake Pokkiri?

Remaking a film has advantages and disadvantages. The advantage is that we know the film. It was a blockbuster down south, so there is a comfort level.

But creating the same magic is difficult. Only after Wanted releases will we know if this recreation of magic has worked.

I am not here to show my talent. I want to entertain people. Be it a straight film or a remake, I will do it.

'Direction is difficult but I like doing difficult things' 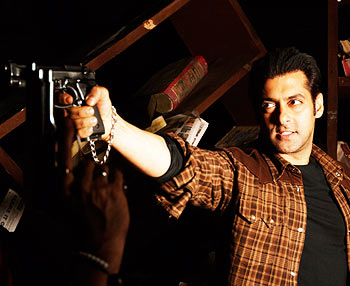 What was Salman's reaction when you met him with the script?

He is a person who doesn't react to anything. He's very cool, composed and matured. He is never hyper. I like him for this attitude.

The only time he was excited was he wanted to dance. He told me, 'Prabhu, break my bones but make me dance.' When people told him that he will get difficult dance steps, he was cool with it. He said he would dance better than me. And he did. He worked very hard.

Since we know an actor's capability, I gave him simple steps. But he worked very hard to do a good job.

The USP of the film is Salmanbhai's energy. He has done all the action scenes himself. He hasn't used a body double.

You have made Salman sing for a promotional song as well.

That was his idea. He always likes to do new things. I was shocked when I heard him sing.

What made you cast Ayesha Takia?

The film needed someone like her -- a girl-next-door character. Action films don't have much scope for women but this film has a substantial role. If the heroine's character is taken away, the film will be incomplete.

She has put in a tremendous performance. When we watched the film, I couldn't think of anybody else who could have done a better job. She is very professional. We did not have any tension from her. She was tailor-made for the role. She is a good dancer and a fast learner.

This pairing is unique too. This is the first time Salman and Ayesha have acted together.

What made you turn to direction?

Direction is difficult but I like doing difficult things. Acting is easy. With dancing, people's expectations rise. But in all this, I don't have as much responsibility as I do as a director. The director is the captain of the ship and has to be there from the start to the end. You have a lot of tension.

'Language wasn't much of a barrier' 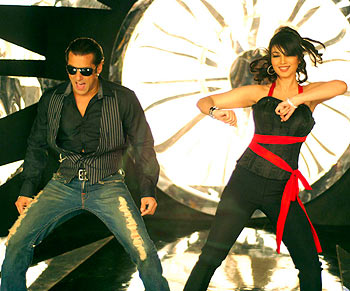 To shoot a Bollywood film, you had to come out of your comfort zone and in a language you don't know well.

I'm comfortable here. Mumbai is not new to me. These people are not new to me. I have been here many times. The only difference is the number of days.

Once you become a director -- even if you're directing a film in a language you are not comfortable with -- the pressure is always there. But it lasts for the first two days only.

Language wasn't much of a barrier. As a director, I knew every word of the film. I can understand Hindi but I can't speak it fluently. Everybody spoke English on the sets, and all of us knew each other. I was well looked after. It was a comfortable environment. If there were any doubts before the shoot, we would sit and discuss them.

Dialogue writer Shiraz helped me with dialogues. He usually gets paid to write dialogues. Here, he was being paid to cut them down! The film is such that the actor speaks through actions more than words. There were only punchy one-liners. That's how the film is -- more visual than dialogues.

Will we see you directing more Hindi films?

The results of Wanted will decide that.

Has acting taken a backseat in your career?

I'm just going with the flow. I don't how I became a director or an actor or a choreographer.

'When you watch Wanted, you will love the villain' 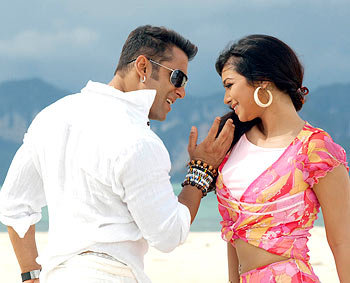 How was the atmosphere on the sets?

We would joke around when we were shooting easy scenes, pull each other's legs while shooting songs and action scenes. That's because I had nothing much to do. My stunt director and choreographer took care of those.

When the choreographer gave Salman a dance step, he would look at me and ask, 'Prabhu, do I have to do this?' I would motivate him and say it was easy. And he would immediately start practicing.

Why did you cast Prakash Raj as the villain in Wanted?

It wasn't my choice, it was Boney sir's. As a director, I can't judge Prakash Raj. Coming from the south, I didn't know how he would fit in but everybody suggested we cast him. He isn't a new face that I should be worried about. He has won three National Awards. It is a pleasure to be able to direct him in Wanted. When you watch the film, you will love the villain.

'It was Salman's idea to sing in the promotional song' 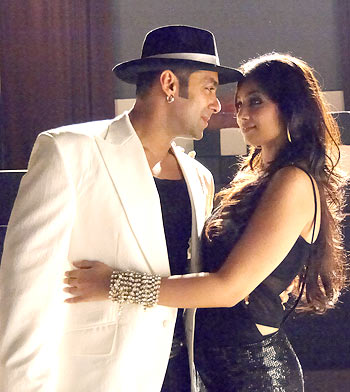 According to people down south, Bollywood's superstars are Vinod Khanna and Amitabh Bachchan. That is the kind of stature he enjoys among his fans in the south.

On the first day, I was scared. I was very professional when introduced myself to him. But immediately afterwards, I phoned my friends down south and proudly said I'm working with Vinod Khanna. I was like a child.

Govinda and Anil Kapoor also cameo in a song. It was very nice of them to agreed to that. They came for Salmanbhai and Boney sir.

Why is there a delay in the film's release? It was supposed to release in July.

I have a Tamil film in line, in which I will be acting.