'Kamalji gave me 100 per cent control' 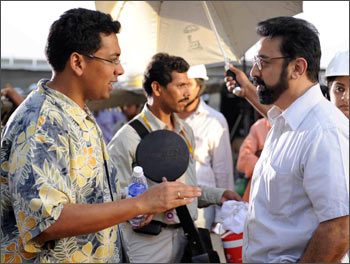 Chakravarthy or Chakri Toleti is still remembered as the boy photographer who accompanied Kamal Haasan in the much acclaimed Sagara Sangamam.

The boy has now returned to Tamil films as the director of one of the most talked about films in Tamil now; Unnaipol Oruvan, the Tamil remake of A Wednesday, which also stars Mohanlal.

In this interview, the young director talks about the film and how it felt to direct two veterans

Where were you after acting as the boy photographer in Sagara Sangamam?

I acted in around 14-15 films as a boy after Sagara Sangamam but people still remember me as the photographer friend of Kamalji. In 1995, I left India for the US to study film making.

My father, though a doctor by profession, was into writing stories for films. He was friends with K.Balachander, Bhagyaraj, K.Viswanath, Bharatiraja, etc. That was  how I got interested in films. My father was the only film connection I had. My Mom also was a doctor, and ours is a family of 30-40 doctors.

After acting in films, I slowly got interested in the art of film-making. 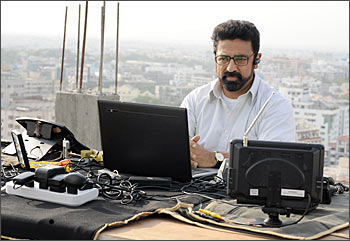 How did your parents, both of them doctors react to your decision to choose film making as a profession?

They were fine with the idea, and very supportive. In fact, I did start my engineering also. So did my brother, the only two non-doctors in the family.

After the film-making course, I got a job offer to work with Disney. I worked there as a technical director from 1997 to 1999.

What did you learn by studying there and working with Disney?

I felt studying in the US would give me an international exposure. I went to the US because I wanted to specialise in visual effects at a global level. While studying in the US, you get a very holistic view of film making; right from the concept stage till the delivery stage.

'I am really passionate about building and creating' 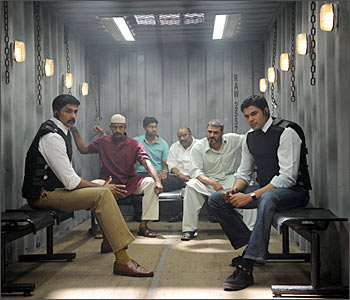 After Disney, what did you do?

During the 1999-2000 period, my brother and I started a company -- Cytura -- which was based on content management. Even rediff.com was considering using our software. We primarily focussed on healthcare and media entertainment. We sold that company in 2001.

How did you become an entrepreneur after learning film making?

The two things I am really passionate about are building and creating either in an entrepreneurial way or the creative way. That is my passion.

'Kamalji and I together thought of doing Unnai Pol Oruvan' 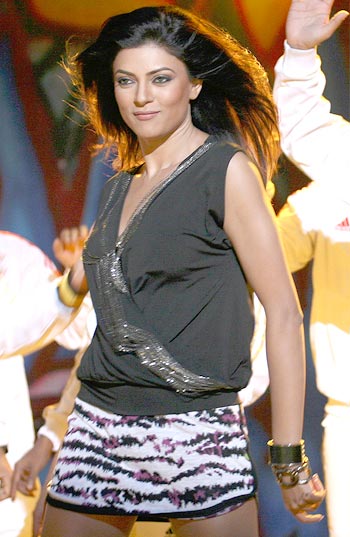 From being an entrepreneur, you have turned a film-maker now.

Yes. That was my focus. I always wanted to make films. In all the companies I had created, there was a media-entertainment division. We used to work at Disney. So, I maintained the team throughout.

How did Unnaipol Oruvan happen?

After a long time, I caught up with Kamalji though I was in touch with him on and off. Whenever I visited India, I had visited Kamalji.

When he was shooting Dasavatharam, he wanted to shoot certain episodes in the US. So, I  helped him execute the film there. My team did the stunts, special effects and action sequences of the film.

Was it your idea or Kamal Haasan's idea to remake A Wednesday?

We started talking on different projects and I mentioned to him about this film. He saw it and finally we decided on making it in south Indian languages.

Did you want to make your first film with him?

Because of the friendship and relationship I have with Kamalji, I used to discuss films with him. This project came up and he gave me the offer and I took it up.

'It is every directors' dream to work with Kamalji and Lal' 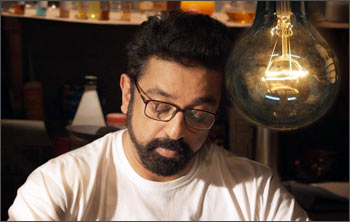 Why a remake and not an original film as your debut film?

I never really thought of the film as a remake or original. It was not an intention. The idea was to make a good film. I was quite impressed with A Wednesday. I liked the story. Both of us discussed and one thing led to another, I took it up. Dialogues were written by Era Murugan based on the original script.

Was it your decision that Kamal Haasan would play the role of Naseeruddin Shah?

The idea was that it was a good film for Kamalji to do in Tamil.

Why did you choose Mohanlal and Venkatesh?

I am not that familiar with the actors in India. So, it was Kamalji who said Mohanlal was the best choice. I had helped Kamalji execute Marmayogi and Venkatesh was a part of it. So, the relationship already existed.

This was your first film, and you were directing people like Kamal Haasan and Mohanlal who have won several national awards. Were you nervous?

I was more excited than nervous. It was a great opportunity and a directors' dream to work with artists like Kamalji and Lal.

'Kamalji suggested Shruti and I agreed' 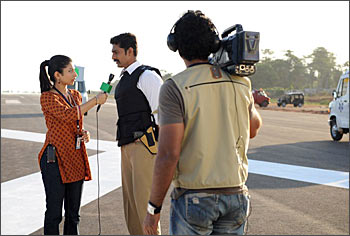 It was a production by Rajkamal. Was it Kamal Haasan's idea to have his daughter Shruti as the music composer?

Kamalji suggested Shruti and I felt really happy. She is young, talented and very dedicated. It was a great experience working with her.

Did you at any point feel that you will be overshadowed by the Haasan family?

[Laughs] It did not even cross my mind because of the relationship I have with Kamalji. He has given me 100% control over the film. I really appreciate that. I am fortunate to have such a producer. He is playing multiple roles in the film, that of the producer, lyricist, and actor.

What will your next role be, that of a director or an entrepreneur?

I am always an entrepreneur. I still own several companies.

Does that mean both the roles will go parallel?