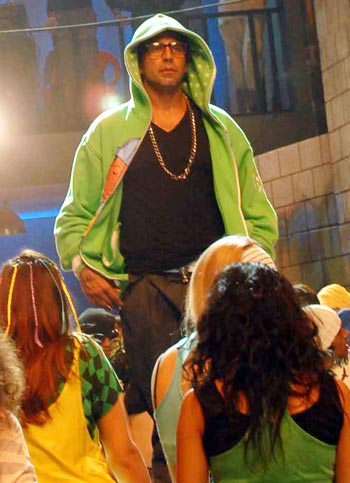 What goes on during a film shoot, many wonder. Well, for those who have gone to cover the on-the-set action it usually means crowds, chaos and waiting.

And that is what happened during the shooting of Akshay Kumar's Blue which releases on October 16. Directed by Anthony D'Souza, a former ad filmmaker, the film also stars Sanjay Dutt, Lara Dutta, Zayed Khan and a sizzling cameo by Aussie singer Kylie Minogue.

The action film boasts of underwater shots -- one shows Lara swimming like a fish in a bikini -- and lots of action. Most of the scenes have been shot in the Bahamas and Mumbai.

The scene which we've been a witness too is a promotional shoot of the title song shot at Film City, Mumbai. The music video will appear at the end of the film.

The video was shot with all the actors in the film performing a dance form called Kant choreographed by Ahmed Khan, which looks more like action moves. The sets have been recreated to represent downtown New Jersey.

As for Lara, she had already shot for her scenes earlier in the day.

'I am not a good dancer' 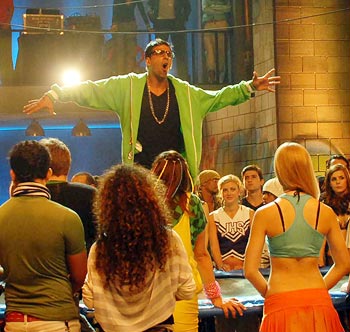 When asked about the dance form, Akshay said, "It is a form a dance called Kant which is very manly. For that I have to jump high in the air using the trampoline. But in the movie the trampoline will not be shown so it will look like I am really leaping."

"To be a stuntman you have to be fit. A stuntman requires better qualities," he replied.

So is he a good dancer?

"I am not a good dancer. My dances are more like aerobics so I don't consider myself a dancer. In fact, the choreographers have to work really hard on me," he said. 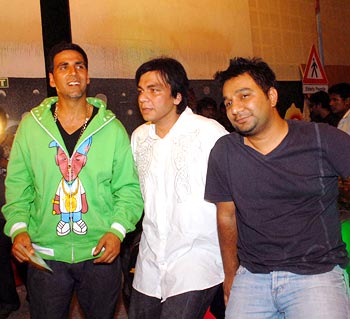 Talking about the film Akshay said, "For me Blue is not just a film it is an adventure. I have enjoyed working on this film and I remember every shot that I have given. I have done so many daredevil stunts in the film with sharks. I have also done some martial stunts deep in the sea without an oxygen mask which was such a thrill because I knew I was pushing my limits. Not may enjoy doing these kinds of things but I love adventure."

To perform some of the underwater stunts, Akshay had to be a certified diver. So he went out and got his certificate by undergoing training in fitness and diving. He was told to lose 4 kilos for Blue. 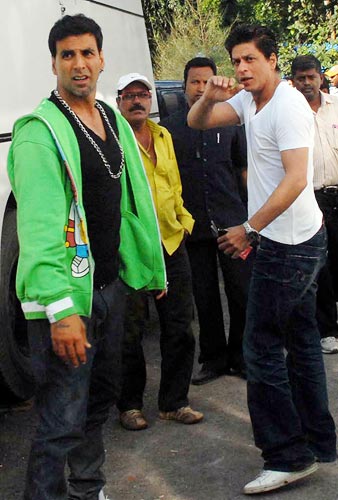 A surprise guest at the Mumbai shoot was Shah Rukh Khan who came to visit Akshay. He stayed only for five minutes. Media reports have cited that Shah Rukh and Akshay share cold vibes.

When we asked Akshay about the visit, he got a bit annoyed. He said that they have been meeting very often, which the media is not aware of.

Anyway, we caught sight of Ahmed Khan, the choreographer who has worked with Akshay many times in the past 18 years, and we decided to quiz him about Akshay's dancing style which he says has 'never changed in years'.

"He knows his limitations. He does not go overboard by trying to do things that will not suit him or which will not look good on him. So I keep this in mind when I am designing steps for Akshay," he said. 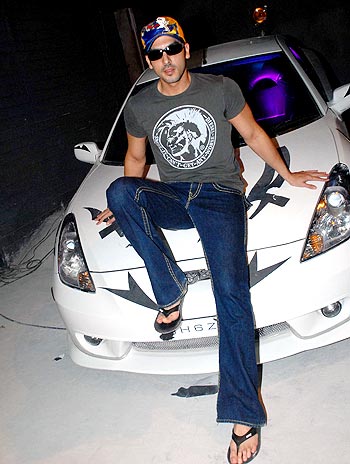 Besides Akshay, we caught hold of Zayed too, who has been dreaming of being a diver ever since he was 14-years-old. Looks like he got his wish though it wasn't as easy as he thought it would be. Add to that he had to shoot with a sharks -- 40 of them!

While doing the stunts, the stunt director instructed Zayed to breathe calmly and not to panic. After a month of diving he was pretty cool about the stunts that even the sharks didn't bother him.