An interview with Lata Mangeshkar's biographer 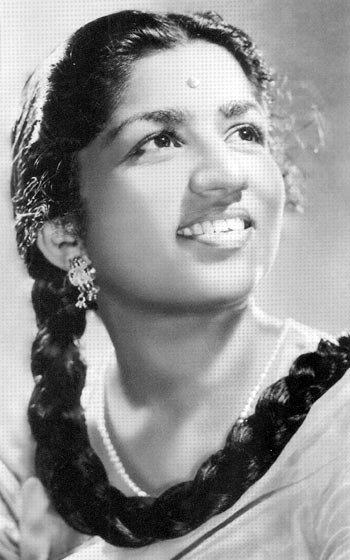 Image: Lata Mangeshkar
Photographs: Courtesy Lata Mangeshkar... In Her Own Voice
Nasreen Munni Kabir, creator of documentaries like Movie Mahal, In Search Of Guru Dutt, How to Make it Big in Bollywood and The Inner and Outer World of Shah Rukh Khan, is a British television producer who has spent 30 years following Indian cinema.

Kabir discussed the iconic singer, who celebrates her 80th birthday on September 28, in a telephone interview with rediff.com's Patcy N from London.

What made you write a book on Lataji?

Anybody who is interested in Indian cinema would only be too happy to write a book on Lata Mangeshkar. It is an extraordinary opportunity and honour to record somebody's life and that too someone like Lataji. You have to be really privileged to be in that position.

'Lataji is not affected by her success' 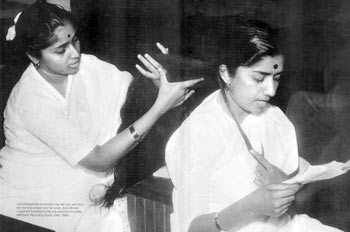 Lataji does not give interviews these days. How did you convince her?

Lataji seems to like my work. I have done many books before and also many documentaries, so it was not difficult. Also, we have known each other for a long time now. Plus, I make sure to ask some good questions and not ask questions that are irritating.

You have to have an idea of the person you are interviewing and if you are well informed, then people are happy to talk to you. How much research one does makes a big difference.

What was it like to meet Lataji? How has she changed from the last time you met her in 1991 for a six-part documentary series? What kind of host is she?

She is very much the same person. She is not affected by her success. She understands that she works hard and she hopes that she does well in her singing. She is not a boastful person (nor does she have) any kind of ego.

Of course, you need some ego or else how do you have any talent? You have to have a personality other (than your) voice or the voice will not be interesting in the song.

She is an excellent host. She knew I like coffee so she would get my coffee organised. She is a very considerate and kind person. Lataji is a very humble person; there is no feeling of I am superior.

What part of Lataji's life has been covered in your book? How long have you been researching it?

Most of her life. I have been working on Indian cinema for 30 years, so I have been researching it for a long time. I had also done research when I was doing the documentary. 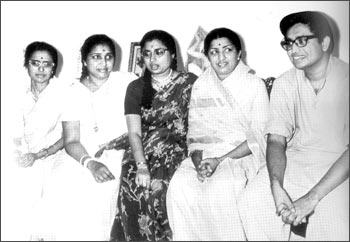 Why did you decide on a Q&A style, and not a narrative biography?

A biography requires a different kind of approach. As I am quite good with interviews, I thought it was better suited to my style. Plus, I had that material from before, so I wanted to use it.

Also, when you are writing a biography, you take somebody else's experiences and put it in your own words. It's nicer to have people talking directly to the reader rather then going through me. So to maintain her personality, I thought of writing the book in a Q&A style.

This book will help dispel some of the myths floating about her on the Internet.

The Internet is fabulous. It has lots of information. But the information is only useful when the person knows the subject a little, otherwise there is lot of rumours that float on the Internet.

Like on the Net it says her name was earlier Hema, which is not true. Her name was Hridaya. This is the kind of false information you find about her.

Also, the (fact) that at the age of five she fainted while singing a song and that when she got up she sang the song exactly from where she had left off. Lataji says that it is not true. Nothing like this ever happened.

What was the toughest part about writing this book? 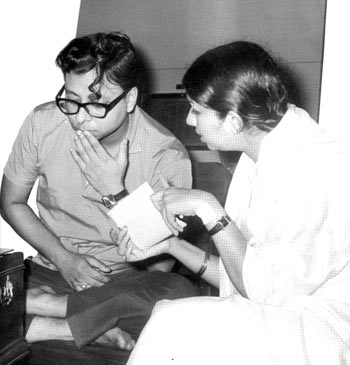 Your book mostly talks about her earlier life. What about her life now?

Because it is very quiet. She reads. She doesn't go out much. She calls her friends when she feels like talking to somebody. That's all there is to say.

Life has changed for her. She is not recording two songs in the morning, two in the afternoon and two at night.

Some of Lataji's answers sound diplomatic -- like she says she did not work with composer O P Nayyar because her voice does not suit his tunes.

Yes. But everybody's personality is different. Some people are diplomatic by nature. O P Nayyar is dead now, so what is the point in saying something where he cannot defend himself? That would be in poor taste.

Lataji did not say much about R D Burman too.

She said a lot of things about him. Or maybe I did not ask more.

What are some of the interesting new details in this book?

I am hoping that I have given the big picture of a (person's) life and their contribution to Indian cinema. But yes I don't think people know that she loves taking photographs.

I don't think they know that she had nine dogs as pets.

I don't think people knew she likes playing the slot machines while vacationing in Las Vegas.

What new thing did you learn about her?

I was just struck by her memory. She recalls everything from the age of five. That I think is incredible.

When you are a singer and you remember the tune after listening to it once or twice and record it that itself tells that she has a great memory.

'Lataji was a very charming and sweet girl' Which is your favourite story?

I like the story (about how) as a child she went to the shop with a fake coin of two annas and used it, but their servant was not able to use it when he went to the shop. That showed how mischievous she is. She was a very charming and sweet girl.

I also liked the story of when she was recording the song for Roshan (the celebrated composer and superstar Hrithik Roshan's grandfather) and (legendary composer) Naushadsaab came in.

Roshan said 'Why don't you record a song for me today?' Naushadsaab conducted the orchestra. That shows their good spirit.

What was her reaction to your book?

She liked it. She did not ask for any changes. We had checked on everything before because sometimes, you can make mistakes on the phone.

Which celebrity are you writing on next?

A R Rahman. It will be similar to this book -- conversations with Rahman.

I did a documentary on the making of Bombay Dreams and the Lord Of The Rings musical and have interviewed him many times.