Lata Mangeshkar, in her own voice 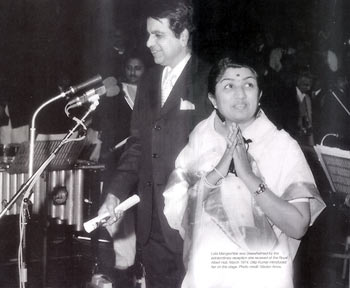 Her incredible voice has won her many fans and admirers. One of them is Nasreen Munni Kabir, a British television producer and creator of documentaries like Movie Mahal, In Search Of Guru Dutt, How to Make it Big in Bollywood and The Inner and Outer World of Shah Rukh Khan.

Her most recent book, Lata Mangeshkar... In Her Own Voice, is a book which she told rediff's Patcy N she was only too happy to write.

As we celebrate Lataji's 80th birthday on September 28, we bring you fascinating excerpts from the book:

Nasreen Munni Kabir: Isn't there a famous incident in which Dilip Kumar commented on your Urdu pronunciation?

Lata Mangeshkar: I must tell you the story. One day (composer) Anil Biswas, Yusufbhai (Dilip Kumar) and I were travelling to work together on the train. This was in 1947 or '48. In those days, Yusufbhai was able to travel by train as no one really recognised him!

We were sitting in a compartment and Yusufbhai asked who I was. Anilda replied: 'She is a new singer and sings well. You'll like her voice when you hear her.' They were chatting together and Yusufbhai asked him. 'Where is she from?' 'She is Maharashtrian.'

'But their Urdu pronunciation isn't correct and in their singing you can smell daal-bhaat' (implying a Marathi accent would come through in the pronunciation in Urdu). I felt terribly hurt hearing him say such a thing.

I knew the composer Mohammed Shafi. He was an assistant to Anil Biswas and (legendary composer) Naushadsaab, and a few days later, I told him I wanted to learn Urdu so I could pronounce it correctly.

He found me a maulana, a man called Mehboob, who taught me Urdu for a short while. When I speak, my Urdu isn't very good, but when I sing I make sure there are no flaws in my diction.

'Asha and I have always been close and still are' 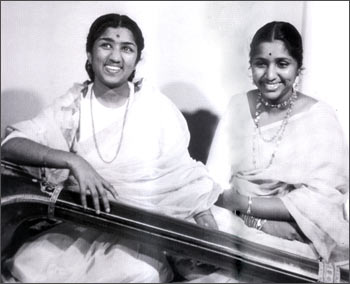 The press have talked over the years about the sibling rivalry between you and Ashaji. Is there any truth in it?

Asha and I have always been close and still are. In 1947, when she was only fourteen, she wanted to marry a neighbour of ours, Ganpatrao Bhosle, who was a ration inspector. Mai (their mother) was completely against the marriage. So Asha left home and married against Mai's wishes. Mai was most unhappy.

Once Asha was married, her husband did not want her to have anything to do with us. She wasn't allowed to see us or write to us. This was the situation for years.

Ganpatrao Bhosle used to take Asha to various music directors and make her audition for them. He believed that she would earn him lots of money and wanted to control her. Asha suffered a lot during those years. She finally left her husband in 1960.

We were living in Walkeshwar (south Mumbai) at the time, and when Asha returned home, she was pregnant with her third child, Anand, whom we call 'Nandu.' We moved to Prabhu Kunj on Peddar Road (also in south Mumbai) soon after Asha's return, and she bought a flat on the same floor as us.

It's wrong to talk of rivalry having spoilt our relationship. We are sisters and neighbours. We talk to each other and eat together. If either of us has a problem, we tell each other. And if we have something to celebrate, we celebrate together.

'It was S D Burman who brought Rafisaab and me together' 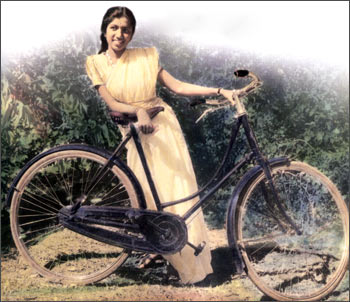 The most famous argument written about extensively was the one you had with Rafisaab. How did this happen?

The argument with Rafisaab was over royalties, and took place sometime in the '60s. I felt we signers should be paid a royalty by the record companies. The other singers, including Mukeshji, Talat Mahmood, Kishore Kumar, Manna Dey fought alongside me.

Rafisaab and Asha believed that once a song was recorded and the producer had paid us -- that was the end of it. Rafisaab didn't think that we should fight for royalties. This created a rift between us. From 1963 to 1967, we did not sing together.

Rafisaab sent me a letter some time later and said he had spoken in haste. Finally it was S D Burman who brought us together. An S D Burman night was held at Shanmukhananda Hall in 1967 and Rafisaab and I met on the stage.

We were both very pleased to be singing together again and sang the Jewel Thief duet Dil Pukare.

Nargisji and various music directors introduced Dada's songs. It was even announced that Rafisaab and I had made up. The audience greeted the news with much excitement! 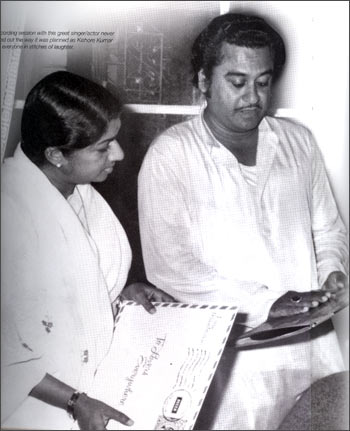 When did you meet the other playback singers?

I met Kishore Kumar around the time that I was working with (composer) Khemchand Prakashji. I used to travel by train from Grant Road (in south Mumbai) to Malad (northwest Mumbai).

One day, Kishoreda got on at Mahalaxmi (in south Mumbai), the stop after Grant Road, and sat in my compartment. I thought he looked very familiar and wondered who he was. He was wearing a kurta-pyjama with a scarf tied round his neck, and was holding a cane in his hand.

We both got off at Malad. Bombay Talkies studio was a long way from the station and sometimes I walked or took a taanga. That day I decided to hire a taanga and Kishoreda hired one too. I set off and so did he.

We finally entered the studio and I saw his taanga right behind me. I thought to myself: 'Something strange going on. This fellow is following me.' So I went straight into the recording studio where Khemchandji was sitting, and under my breath, I asked: 'Uncle, who is this boy? He's been following me.'

We were introduced to one another and that day we recorded our first duet Ye Kaun Aaya Re Karke Sola Singar for Ziddi. In fact, Ziddi was Kishoreda's first film as a playback singer.

When Lata mistook Jaikishan for an 'office boy'! 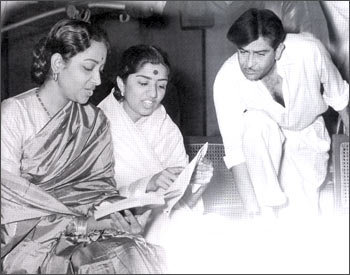 You had a long association with Shankar-Jaikishan and sang such marvelous songs for them, especially in Raj Kapoor's films.

There's so much to say about them. Actually, it was Anil Biswas who introduced me to Raj Kapoor. Before RK Films moved to Chembur (northeast Mumbai), they used to rent offices above Famous in Mahalaxmi.

One day I was recording Kab Aaoge Balama, Baras Baras Badali Bhi Bekaar Gayi for Gajre, and Anilda decided to call Rajsaab down to the recording studio to hear me sing.

I was living in Nanachowk (south Mumbai) and a few days after I had met Raj Kapoor, a fair, slim, handsome young man came to see me. He said: 'You have been asked to sing some songs for Raj Kapoor.'

I had seen Prithviraj Kapoorji in Kolhapur and thought he was very handsome. So I wondered how his children would be. I told my sister Meena: 'Raj Kapoor sent someone over. Perhaps it was his office boy. He was so handsome -- maybe the people who work for RK are as good-looking as the Kapoors.'

When I went to the RK office in Mahalakshmi, I discovered the good-looking 'office boy' was Jaikishan! (laughs) I sat down a little embarrassed and was formally introduced to them: 'This is Jaikishanji and Shankarji.'

The first of their songs I sang was Jiya Beqaraar Hai. We recorded it at Famous in Tardeo -- it took the whole day. In fact, all the Barsaat songs were recorded there.