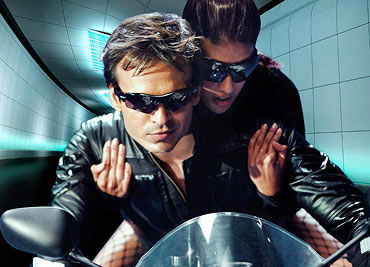 Image: A scene from Prince
Nithya Ramani in Mumbai

Vivek Oberoi started out his career with promising films like Company and Saathiya, and continued to wow us with powerful performances in Yuva, Masti and Omkara, quickly becoming one of Bollywood's hottest actors.

But, just as quickly, his career began to decline, as he became controversy's favourite child, though he managed to turn things around with a commendable role in Rensil D Silva's Kurbaan.

Now, after a hiatus, he will soon be out with a solo-starrer, Prince, which hits screens this Friday. Already it's being called his comeback film.

Nithya Ramani caught up with Vivek and quizzed him on the uncanny resemblance of Prince to many other Bollywood and Hollywood films, the much hyped training that he went through to pull off the character and how (un)comfortable he was kissing Shields. Read on:

You must be lucky to be romancing three women. You have some great action -- meaning stunts and kissing -- with Aruna Shields.

[Laughs and blushes] I am a single guy, and it was great to work with these women. We used to party every day after we packed up.

Aruna and I had great stunt scenes together. Obviously, she was nervous, so I used to serve as her moral support. I would check her harness and cheer her up.

The funny part was the role reversal when we had to do the kissing and intimate scenes. I felt awkward, as I am not into PDA (public display of affection). I had to kiss her in front of 350 crew members -- that's 700 eyes staring at me -- and was supposed to have this lost-in-love kind of look. Suddenly, I felt awkward, like I was the heroine of the film!

All my actresses, especially Aruna, said that they had done this many times, and I that shouldn't be so self-conscious. They made me feel comfortable.

'I know where I stand in terms of box office returns' 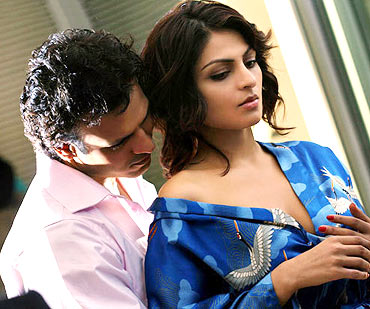 There a sense of deja vu, after seeing the posters, of Krissh, Dhoom, Ghajini, you name it.

[laughs] Tell me about it. You missed Bourne Identity and Iron Man. It may look like a superhero film, but actually I would call it a super hero film.

I think the similarities stem from the fact that we have very few action films, and every time try to give the actor a new look.

Why did you decide to do Prince?

I have known Kookie for a while now, as a wiz-kid who had great clarity [of thought and vision].

I was shooting close to his place, and one day he asked me if I was interested in doing a big action film. Of course I was, so I asked him to narrate the script to me, but he suggested he would show me a video instead.

For a second, I lost all the respect for him. I thought he was going to pull out some foreign DVDs -- first half from some Malaysian film and the second half from some Korean film -- and then mix them up and add a climax of a third film and make a Bollywood masala action movie [laughs].

When he showed me the video, I instead saw something that he called a pre-viz -- the short form of pre-visualisation. Even after having been in the industry for about seven years now, I didn't know what a pre-viz was, because I had never seen anything like that before.

A pre-viz is an animated form of a story board, where you can see the final cut of the actual action sequence and how it will look on the screen. I was completely blown away by this technology.

They had been working on the pre-viz alone for over a year. It had a scratch track of the Prince theme too. That was the kind of passion and commitment that went into it.

Generally actors read the script, take their time to agree to do the film and then sign, but I was so excited that I wanted to be on-board immediately. I called up my manager and blocked my dates for Prince.

I confirmed with Kookie whether the action sequences looked this good only on the cartoon strip, or would they also still look good when I did it in real life [laughs].

I then met Kumar Taurani. A film of this scale -- big and adventurous in terms of trying new things with cinema and action, and one that pushes the envelope -- needs a producer with that degree of vision, passion and belief. My first question to him was if he was sure he wanted me to do the film.

It's a big film and a very expensive one. I am not a fool. I know where I stand in terms of box office returns. I will never forget what he said. He asked me if I believed in the script and when I said I did, he said I was his hero, his Prince and that I would rock this.

All he wanted from me was a serious commitment to rigorous training, so that I'd be able to do all the stunts myself. He asked me for three months; I gave him six and ended up only training for five months. The five months of training involved getting up early and practicing writing with both my hands, because Prince is ambidextrous. I would then get out on my skating board in Juhu [suburban Mumbai], behind my trainer, dodging the potholes and school-going kids. 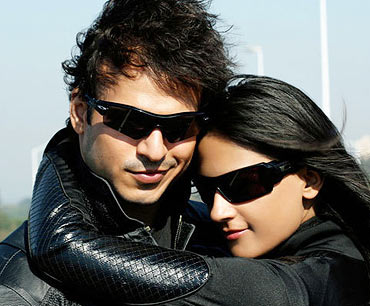 The film boasts of some amazing stunts. Tell us more about it.

It was tough. Prince has a certain degree of strength. He is someone who can do anything and get away with it. These characteristics give you a sense of confidence inside you. Since he has lost his mind and doesn't know who he is, instinct is the only thing that is taking him ahead.

When he is attacked, he is not thinking that he needs to fight six people. He just instinctively takes six people down and his next expression is a confused one wondering how he did it. That transition is difficult as an actor.

Did you watch any other action movies or get into the character?

The pre-viz was there, so I didn't have to watch other DVDs. I think the more you see, the more you tend to borrow from others. It is better to let the character sink into you and let it come from within you.

Prince is not an easy character. It's an interesting one. He is a thief who can steal anything, and then his memory gets stolen! It is an irony.

He doesn't know what he has stolen, where he has kept it and how he is going to find it. The mafia, intelligence agency, cops -- everybody is after him, trying to hunt him down.

All he knows is that he has six days to live, unless he can save himself by figuring out what is going on.

On top of that, he has girl trouble [smiles]. There are three girls claiming to be his girlfriend Maya, and he doesn't know whom to trust.

Were you nervous or scared when you knew you had to do such stunts?

I still am scared. It is a really big film; the biggest film of my career and one of the most expensive films Tips has produced. I am excited, and only hope that Kookie and Kumar are rewarded for the hope and faith they've put in me.

'If not for the producers' conviction in me, I wouldn't have had the faith to pull off Prince' 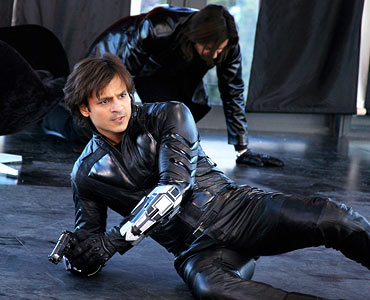 How was it working with Kookie? What are the advantages and disadvantages of working with a debut director? How is he as a director, a story teller, a narrator?

He is an awesome director. He knows his job and knows how to get what he needs from you. But when it comes to narration, he is the worst I have ever seen [laughs].

I have worked with a few debut directors, and the ratio of success has been positive. The difference with Kookie was -- though this was his debut -- that he wasn't an assistant director who has turned into a director. He's a director turning into a feature film director. I have worked under his baton for a few music videos and have always liked his work. He is very tech savvy.

I think he has pushed the envelope in terms of technology. He got a few editors to edit the film, but still it was very difficult for them to edit this eight camera action! Kumarji then sent Kookie to Paris to meet Nicolas Trembasiewicz [editor of Transporter], who got very excited about the film. He was supposed to cut only the action, but decided the cut the whole film.

Apart from the pre-viz and Tips being the producer, how much of the excitement was because it was a solo film?

In the phase of career I was in, a solo film had the opposite of appeal. If not for the producers' conviction in me, I wouldn't have had the faith to pull off Prince.

'I could have died doing the stunts' 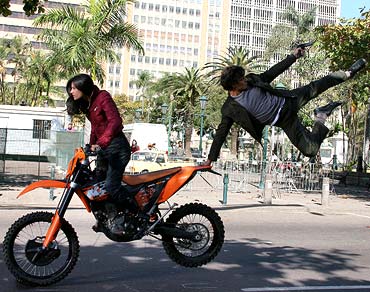 What were your favourite or most difficult stunts scenes?

Training was easy. I had a trainer who would be on his bike at a speed of 30-35 kmph. I was on my skate board, holding the back of his bike and trying to dodge potholes. I thought I was doing pretty well.

Cut to Durban, South Africa, three months later, shooting the skate board action sequence. I thought it would be easier, as the roads were as smooth as the cheeks of my heroine [laughs]!

Mumbai's 100cc bike got replaced by a dirt bike, and my skating board instructor got replaced by a crazy female stunt biker. Once she started the bike, she was zipping at such a speed that I could feel the heat from the road on my skate board. To top if off, I was shooting on the main road, which was one way. And I was moving in the wrong direction!

I was supposed to turn around and shoot at the camera, not knowing where the cars were coming from. It was crazy and scary. Had it not been for the training I had, I wouldn't have been able to pull it off.

God forbid, if something happened, I could have died. There were no safety gears, and I could hurt my head and injured myself badly.

Similarly, while doing a bike stunt sequence, we were shooting on the edge of a road, which had a crazy 800-1000 metre cliff on one side and fast moving traffic on the other.