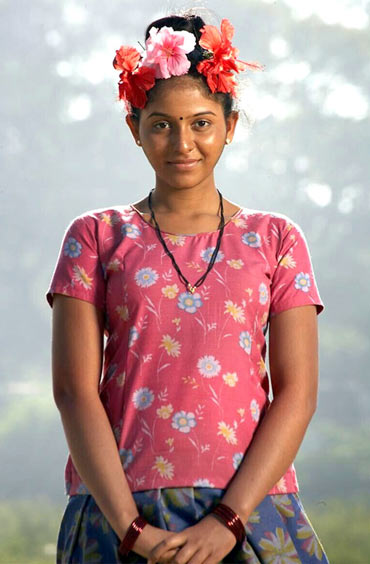 Image: A scene from Angadi Theru
Shobha Warrier in Chennai

Debuting in an offbeat Tamil film like Katrathu Thamizh (directed by Raam) is unusual for any young heroine but then that is Anjali for you.

The actress went without make up to give a powerful and unconventional performance. What's more she outdid herself in the much acclaimed Angadi Theru by Vasantabalan which was even more realistic.

She looked and behaved no different from any spirited girl from the region.

In this interview, Anjali talks about the experience of acting as Kani in Angadi Theru. Excerpts:

Vasantabalan said he chose you for Kani's role because you reminded him of actresses like late Shobha, Revathy and Suhasini. What do you have to say to this?

I don't know how to react to this. He has compared me to some of the legends in the Tamil film industry. When I heard this, I was pleasantly surprised because not even in my wildest dreams did I think of myself on the same lines.

I don't know whether my name can be spoken in the same breath as Shobha, Revathy, etc. Yes, of course, I am extremely happy! 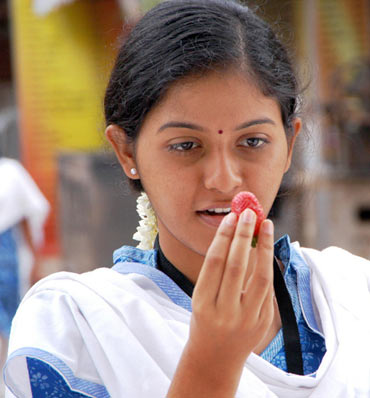 We saw you first in a very powerful realistic role in Katrathu Thamizh and again in another de-glamorised role in Angadi Theru. Do you prefer doing such realistic portrayals?

It is not like that at all. I did not go for such roles and I did not pick them; the roles came to me. For both the roles, the directors picked me. Perhaps they saw something in me that's different.

Many young actresses, in the beginning of their career prefer doing glamorous roles but you agreed to act in these two films. Why?

Kani in Angadi Theru, for example is a fiery girl, full of spirit and I enjoyed playing her. All those who have seen the film tell me that I look and behave like the character. What more do I want as an actress? I don't know why they think I am exactly like Kani. Maybe I look like her. Frankly, I do not know what people like about me and Kani. 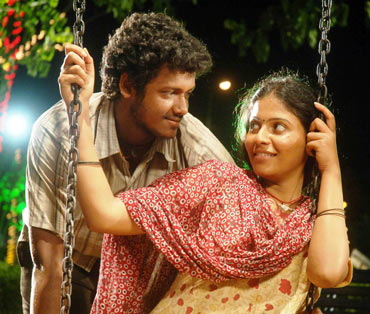 As an actress, what do you want from your characters?

I only want to perform, and make people happy and say that I am good as the character. The audience should not see me but the character on screen; that is what I want. I don't want to make viewers happy with my dress, looks or glamour but with my performance.

How did you get into films? Was acting your dream?

Not exactly. I am from Andhra Pradesh and my mother and father had this desire to act in films. So, through me, they are realising their dreams. My mom used to tell me that I would be a heroine one day.

After my schooling, we moved to Chennai, and I started modelling. I got a chance to act in a Telugu movie called Photo. One day Raam sir, the director of Katrathu Thamizh saw me and asked me whether I was interested in acting. I said I had already acted in a Telugu film. He signed me as the heroine of his film after doing a photo test.

Didn't you study after school?

I did continue my studies in Chennai. I have taken my degree in Mathematics. After my studies, I am working as an actor now.

'My style of acting is natural' 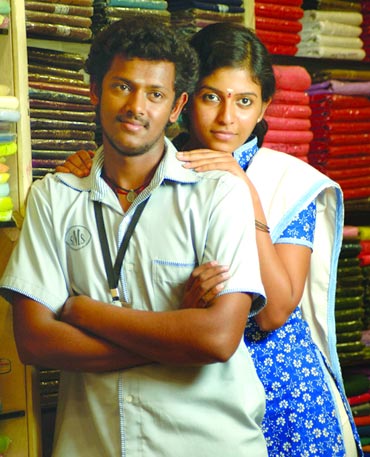 What is acting for you now, a passion?

It is my passion now. I feel we should be passionate about what we are doing. If we don't feel passionate inside, it will show on screen.

Do you have any inspiration to be a good performer?

Frankly, there is none. I like many actresses like Revathy ma'am, Jyothika, etc. But I don't want to act like anybody else. I want to have an identity of my own. My style of acting is natural. I become the character and emote. If the character is sad, I feel her sadness and I become her.

Between Katrathu Thamizh and Angadi Theru, which was tougher to do?

Angadi Theru, of course. In Katrathu Thamizh, the girl was very playful in the first half and changes in the second half but in Angadi Theru, the girl goes through a lot of emotions. She is playful, cheats, gets angry with the boy, insults and shouts at him but at the same time she also loves him and showers affection on him.

'Bharatiraja sir showered a lot of praises on me' 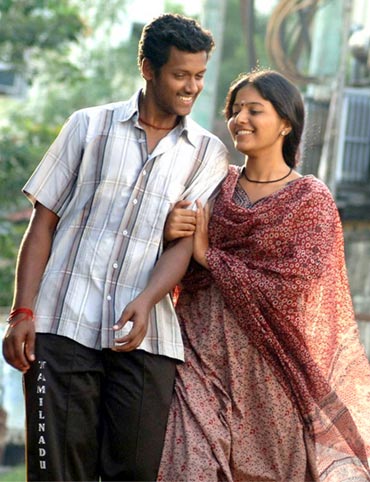 How did you prepare yourself as Kani?

The truth is that I had no idea how the girl Kani was. Everyday, the director would tell us to do something, and I did it. Only when I started dubbing did I understand who she was and how she behaved. So, you can say everyday, I became Kani the way the director wanted me to.

I read that you all were left to sell things on Ranganthan Street while a hidden camera captured what you did on that street. Can you tell us the experience of selling goods on the street?

In the morning, we were left on the street in uniform with many small goods, and over phone, the crew told us to start selling. We never went to the street in a car because we didn't want to draw attention. We would walk and then select a place to sell our wares.

Once we started selling, nobody -- not even the other sellers -- knew we were from a movie unit. Even we didn't know where they had kept the camera. After many hours, we would get a call to wrap up for the day. One day, I sold things worth Rs 300! I didn't know why many people came to buy from me. I was so thrilled to sell so many things.

Are you satisfied with your performance when you saw yourself on the big screen while dubbing for the movie?

What is the biggest compliment you got for your performance?

The biggest was from Bharatiraja sir. He showered a lot of praises on me. I am acting with him and K Balachader sir in Rettai Suzhi produced by Shankar. I play Bharatiraja sir's daughter in the film. It is a simple role.