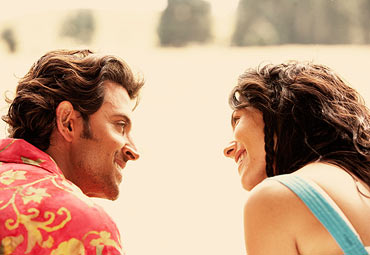 Image: A scene from Kites
Sukanya Verma in Mumbai

When Jennifer Aniston says she can carry a tune, she isn't alone. The Friends star showcases her singing skills in an under-production musical, The Goree Girls. She isn't the only one though.

Quite a few of her colleagues in Hollywood, from John Travolta (Grease) to Jim Carrey (The Cable Guy) have done it as well. And how!

Back home, the scene is no different. After all stars love to be an all-rounder, from dancing like a dream to doing their own stunts, you get the drift?

At present, Hrithik Roshan is gathering accolades for his silvery rendition of Kites in the Sky for Anurag Basu's romantic thriller, Kites. (Read the music review here).

Considering his musical lineage -- his grandfather, the late composer Roshan produced some fine music during the 50s-60s even as 'Chacha' Rajesh Roshan continues to helm lively melodies through the past four decades -- it shouldn't be a shock that the Krrish star, among many other things, sing.

On that mellifluous note, here's a lowdown on Bollywood stars taking to playback singing. 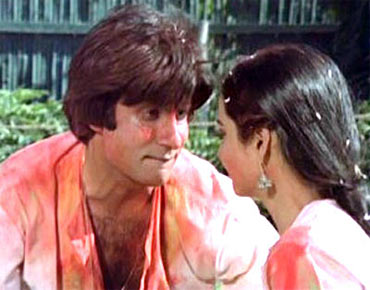 Image: A scene from Silsila

Right from the time he flirtatiously swung to Rang barse, a must on every Holi celebration play-list, oozing magic in the ultimate love lullaby, Neela aasman -- both in Yash Chopra's Silsila, taking story-telling to new heights in Mere paas aao mere doston in Mr Natwarlal to exuding gentle vulnerability in Baghban's Main yahaan tu wahan and boyish innocence in the title piece of R Balki's Paa, Amitabh Bachchan reminds us why we love him as much as we do.

Though not a trained singer, Big B's husky baritone works well around any tune -- folksy or frail prompting him to release an album, Aby Baby featuring the catchy track, Eir bir phatte. 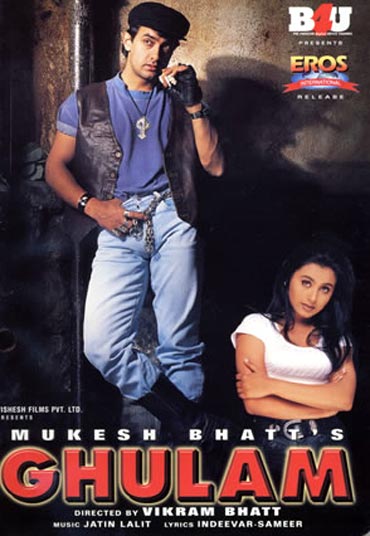 Image: A poster of Ghulam

Nothing less than perfection is good enough for this Khan.

And so not only did he work on looking every bit of a street-smart, cocky tapori punk in Vikram Bhatt's Ghulam but matched the attitude with his zingy delivery in Aati kya Khandala.

Though not a killer voice by any standards, Aamir is convincing enough to grab Rani Mukerji's (not to mention the entire nation) attention. 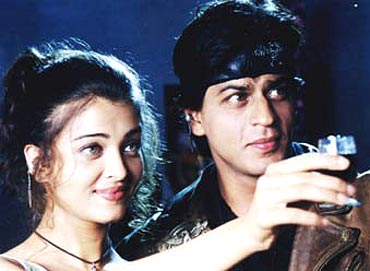 Like Aamir, SRK stays safe by sticking to the can't-go-wrong tapori format of Apun bola, Josh. But he does.

Unmistakably off-tune, the superstar gets away with his unharmonious doing owing to, what can only be explained as, his overwhelming fan base that laps up everything he does.

They don't call him King Khan for nothing, folks. 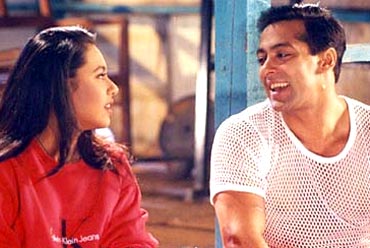 Image: A scene from Hello Brother

A self-styled Salman Khan indulges in all sorts of tomfoolery as the dippy ghost in Hello Brother. And that includes serenading Rani Mukerji in a pair of pink pants to the beats of Sajid-Wajid's pleasantly pedestrian, Chandi ki daali par. Only he's not lip-syncing.

The man puts his drawling expressions to good use and, like it or not, does a fairly good job. 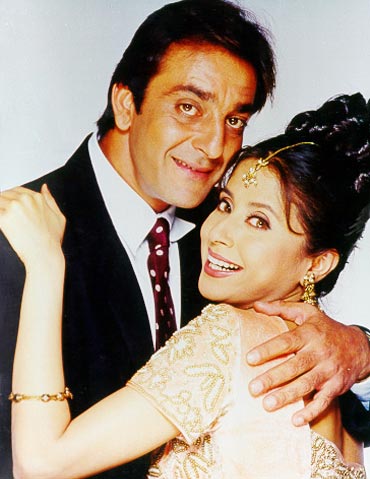 Image: A scene from Khubsoorat

The tapori trail doesn't stop here. Sanjay Dutt contributes to the genre with the ribbing tones of Khubsoorat's Aye Shivani.

Dubbed Bob Dylan by former buddy Sanjay Gupta, Dutt, while never ever remotely resembling the legend, acquires a sinister hum to spring a dark and smooth line-up of cocktails like Rama re, Tez dhaar and Kabhi muskurake for the filmmaker's infamous remakes -- Kaante, Musafir and Zinda respectively. 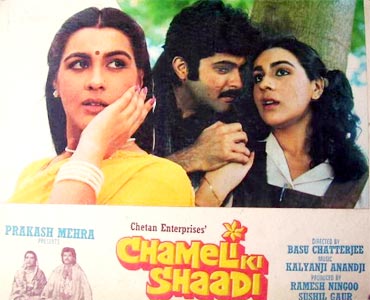 In an interview with rediff.com, Anil Kapoor once said, 'Only non-singers are singing songs these days. I am a trained semi-classical singer and I am not bad. I have a good voice that is the reason why I am not singing.'

Tutored under the guidance of Chhote Iqbal, to understand the finer nuances of a performance, AK did lend his jhakaas baritone to croon the one-of-its-kind title track for the 1986 comedy, Chameli Ki Shaadi. 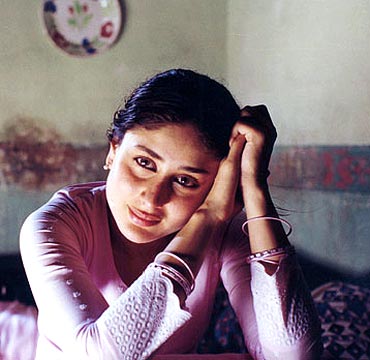 Image: A scene from Dev

Govind Nihalani's Dev features Kareena Kapoor in a new avatar. And by that we don't just mean her make-free look in the drama about communal tension.

The actress lends her babyish voice to carefully enunciate the sentiments of a young woman in love.

Though rusty, Bebo is most genuine in her efforts. That alone deserves some brownie points, don't you think? 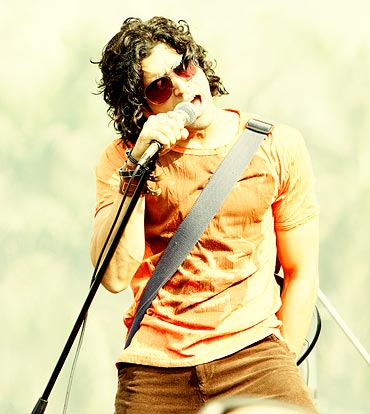 Image: A scene from Rock On!!

Everybody loves to root for an underdog. And non-singers, apparently!

That explains the Rock On!! craze, right? Playing the charismatic front man of a rock band in his acting debut, director Farhan Akhtar takes his role rather seriously (read literally).

Full marks to the creative troika of Shankar-Ehsaan-Loy for masterfully utilising his limited range to serve high-voltage spunk with chart-climbers like Sindbad the Sailor, Socha Hai and Pichle Saat Dinon Mein. 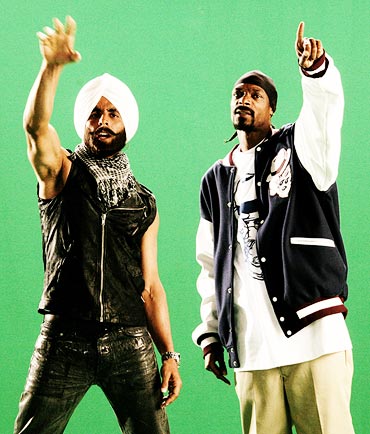 Image: A scene from Singh is Kinng

The Khiladi pitches in a desi rap to tell us why, highlighting the eminence of the concerned community. With renowned rap artiste Snoop Dogg and RDB collaborating on this snazzy fusion of style and rhythm to do most of the field work, Akki's left with little else to do.

He attempts to make up for it by rapping some more, with Bohemia in tow, in the groovy albeit self-absorbed Chandni Chowk To China.

Too bad, this one found no takers. 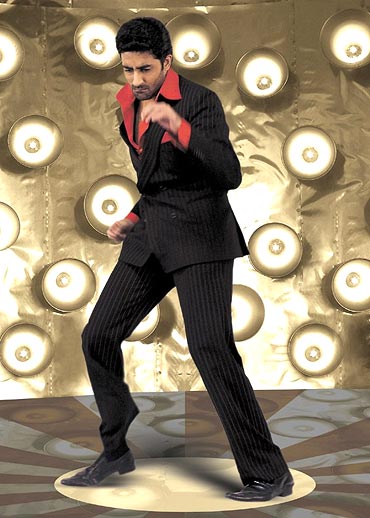 Image: A scene from Bluffmaster

Following in the footsteps of his Pa, son Abhishek Bachchan shows off his vocal chops in Vishal-Shekhar's stylish hip hop mix, Right here right now. Needless to say, the song turned out to be a huge hit on all the countdowns.

How about an encore, Junior Bachchan? 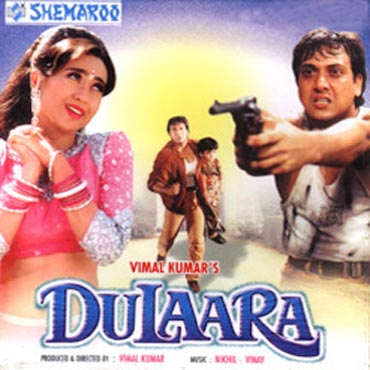 Image: A poster of Dulaara

There's something incredibly animated and amusing about Govinda's playback skills.

His frontbencher fans were more than happy to join this celebration of eve-teasing. 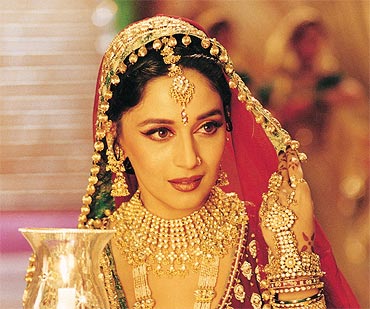 Image: A scene from Devdas

If her training in Kathak stood her in great stead to portray an exquisite courtesan in Sanjay Leela Bhansali's Devdas, Madhuri Dixit's appreciation for Indian classical music helped her to playfully render a few verses of Pandit Birju Maharaj's Kahe chhed mohe.

Technically, there's not any major singing involved, the actress, nevertheless, extends sincerity to her part.

And then some more... 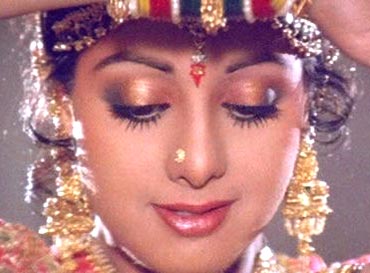 The list of actors taking to singing goes on and on.