A volleyball player who became a hit movie star 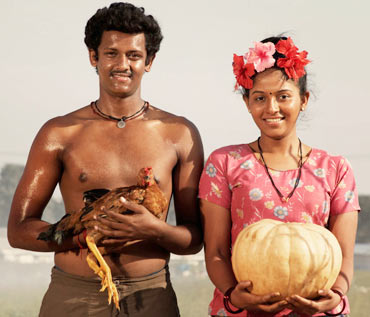 Image: A scene from Angadi Theru
Shobha Warrier in Chennai

Vasantabalan's new film Angadi Theru made with sincerity, honesty and passion is turning to be a major event in the history of Tamil cinema.

The way the director has shown a mirror to the society that is cruel is astonishing. In doing so, he has made ordinary looking boys and girls the most promising faces in Tamil cinema.

Other than Anjali who has given an amazing performance as Kani, Mahesh, the hero, is another youngster who is getting praise from all quarters.

In this interview with rediff.com's Shobha Warrier, the 20-year-old volleyball-player-turned actor talks about his Angadi Theru experience.

You are a state level volleyball player. How did a sports person become a film actor?

It happened two years ago. I represented my school for a volleyball match in Tirunelveli, and while we were practising, Vasantabalan sir's assistants saw me. I got scared when they called me over as I had no idea who they were.

They wanted to know whether I was interested in acting in a film. I said, I don't know anything about films and that I am a volleyball player. 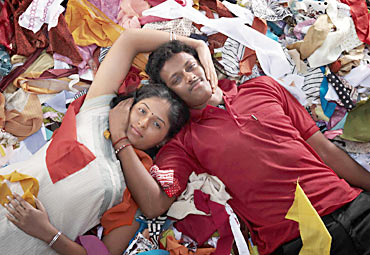 Did you say no to them?

Yes, in a way. I said I was not interested in acting. Then I went to Madhya Pradesh for a tournament. They were constantly calling me when I was there. My coach wanted to know who was calling me so many times. I told him about their offer. He suggested I give it a try. If not for him, I would not have accepted the film at all.

I was not interested at all. The only thing that was on my mind was to be a good volleyball player, and get a government job. Films and acting are for other people, I always thought. I was just an ordinary person, no way connected with films.

I have been playing volleyball since sixth standard. Sports is my life. I have played for my school and for my state too.

How did your parents react to the film offer?

They were dead set against my acting in films. My father is a salesman and my mother, a housewife, and we are in no way connected to films. Then, Vasanatabalan sir's assistants came home and convinced my parents and brought me to Chennai to act in the film.

I am from a small place called Chinnalapatti near Dindugal and I was studying in class twelve at that time. I came to Chennai after I finished my twelfth board exams.

'Playing a match was easier than acting' 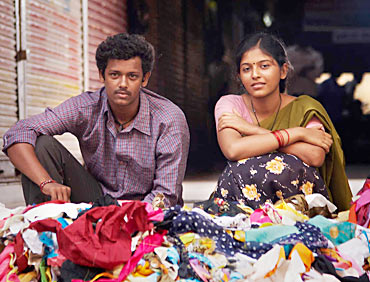 What was going through your mind when the story of Angadi Theru was narrated to you?

Let me say again that I have had absolutely no knowledge of cinema. Initially I didn't understand what they were saying. I was scared more than anything. Playing a match was easier than acting.

What was your first scene? How did it go?

The first scene was one where we kept kolu (navratri tradition). I was asked to give a letter to Anjali. That was the first time I stood in front of a camera. I was confused because I had no idea why I was asked to give the letter. I was not told the story, so I had no idea what everything was all about. Later, I read the script and understood why he was doing what he was doing. After that, it got a little easier.

You sold many things as a salesperson on Ranganathan Street in the movie. How was that experience?

We had so many small items with us and were asked to stand on the street and sell them. Anjali and I sold many things and made Rs 300 to Rs 400! Those who came to buy things from us didn't know that we were shooting a film; they thought we were real sales people. It was fun!

'Because it had to look real, all the beatings were real' 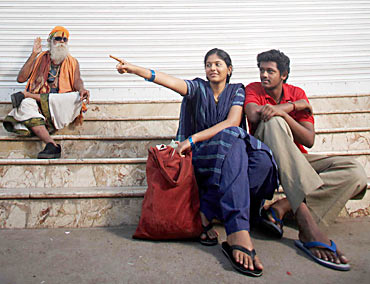 Which was the toughest scene to enact in the film?

Did they really beat you up?

Of course. I bore the brunt. Whatever you see was real. There was no dupe! [stunt person] Because it had to look real, all the beatings were real. It was very painful. I didn't sleep for three days after that. I bore the pain because I wanted the scene to look real. Now, everybody says the scene looks very touching.

Did you ever expect the film to have such an impact?

As I have no knowledge of films, I didn't know what to expect. I just did what they asked me to.

I also got a lot of help from Anjali and Pandi as both of them were extremely supportive. She used to tell me how to be natural in front of the camera. Without their support, I would not have done a good job.

'I want to play a volleyball player in a film' 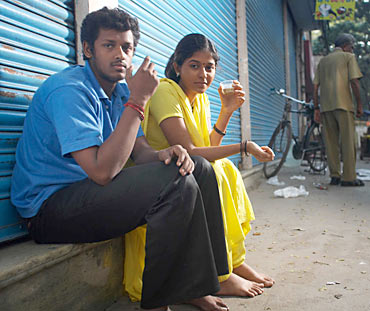 Have you seen the film in a theatre?

Yes, like all the others, I went to the theatre in my village with my family and watched the film on the day of its release. Till then I had no idea how it had come out. I couldn't believe that it was me who was acting in the film. Actually I was moved to tears by many scenes.

How did the people of your village react to you as a film star?

They have known me since my birth, and I am still the same to them. I am not a film star. But all of them appreciated my work. They didnt expect me to act so well. That made me happy.

Does the success of the film mean the end of a volleyball player and the birth of an actor?

Are you getting many offers now that Angadi Theru has become a sensation in Tamil Nadu?

Yes, I am getting offers and I will seek the help of Vasantabalan sir and his assistants in choosing films as I have no idea about films even now. I want to act in good films like Angadi Theru.