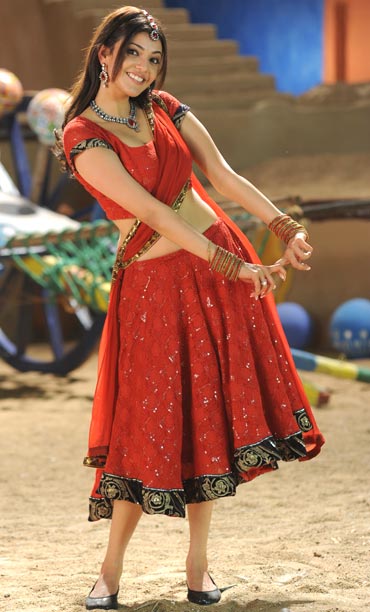 Image: A scene from Darling
Radhika Rajamani in Hyderabad

Kajal Agarwal has slowly but steadily climbed the success ladder with Telugu films like Lakshmi Kalyanam, Chandamama, Aatadista and Pourudu.

And with last year's Magadheera, the pretty girl has further cemented her place in the industry. She delivered a power-packed performance as princess Mitravinda as well as today's Indu.

Kajal is also getting to act with top heroes like Prabhas and NTR (Brindavanam) and is eyeing Tamil films too.

Her next major release, Darling with Prabhas directed by Karunakaran opens this weekend. Here's what she has to say about the movie and more. Excerpts: 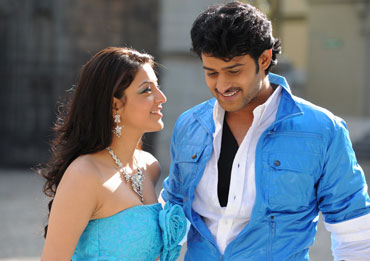 After doing an exacting double role in Magadheera, is the role in Darling a light one?

The role in Darling is an interesting one. I can't expect Magadheera type of roles to come my way all the time. I'm glad I got that. Darling is an easier film, a more fun film. It's a cute love story that everyone can relate to and enjoy.

Darling is also a family film. It is about the relationship between father and son, brother and sister shown beautifully even though the main plot is a love story.

I play Nandini who is in the hero's imagination as well as outside his imagination -- it's not a double role but interestingly scripted.

'All along I have been playing goody-goody characters' 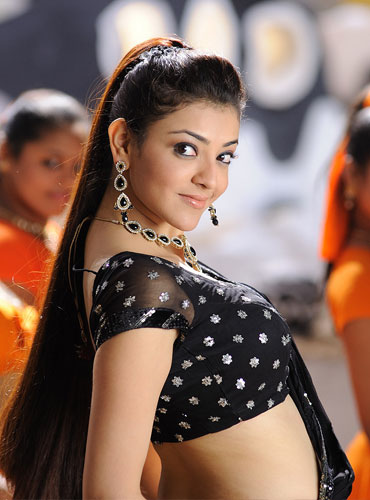 Is it a glamorous role or do you have a substantial role to play in Darling?

I do have a substantial role. I play a brat. All along I have been playing goody-goody characters. But in Darling I have a mischievous role. The look is different.

The movie was filmed in Switzerland, Bangkok and Araku. It was shot in winter in Switzerland in sub-zero temperature. It was freezing cold. The Interlaken (lake) where we were filming was semi-frozen.

Director Karunakaran is known for his love stories which are a good blend of emotions...

It's an interesting blend. Emotions are Karunakaran sir's forte. Prabhas is an action star. So in this, the commercial aspects and Karunakaran sir's emotions come together. The screenplay and story is fabulous and will keep people glued to their seats.

'I have a fetish for shoes' 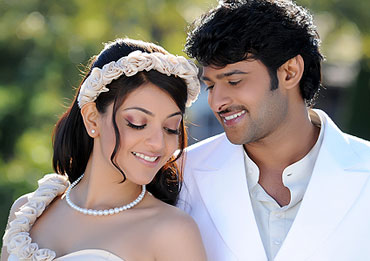 How was it being directed by Karunakaran?

He's a wonderful, friendly person and nice to all from the spot boy to the actor. He is hard-working, which comes forth in the film.

This is your first film with Prabhas. How was it acting with him?

I was happy wearing heels (as Prabhas is tall). I have a fetish for shoes and love wearing 5 to 6 inch heels in the film. It was nice working with Prabhas. He is a sweet, genuine and straight-forward guy. On the work front, he is professional.

The film involved a lot of interaction between the hero and the heroine, so a rapport and comfort level was required. Prabhas was co-operative. His character is also cute. He was a prankster on the sets.

'NTR is a fabulous actor and dancer' 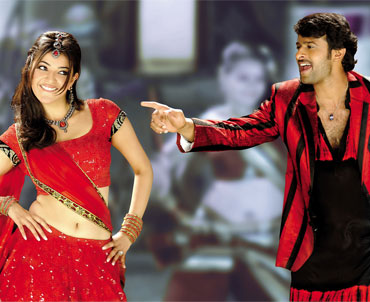 You are doing Brindavanam with NTR, another first film with him. Could you talk about it?

Brindavanam is a very different story. It's a first time for the director and NTR to do a love story. I am paired with actors who are doing a love story for the first time. I play Bhoomi, an introvert.

He's so full of life, a fabulous actor and dancer. He's blessed.

What are your future projects in Telugu? You seem to have signed a film with Naga Chaitanya.

It's on the cards. Talks are on for a few other projects too. I'm doing a Tamil film Naan Mahan Alla with Karthi. Only a bit of the shoot is left. It's a mainstream film. I play Priya, a middle-class working girl who is confused about what to do. It's a relatable character.

'I got sun burnt while shooting for Magadheera' 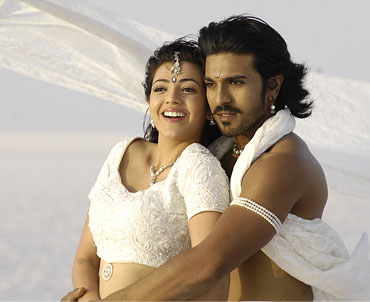 You were brilliant portraying princess Mitravinda in Magadheera and at the same time you played Indu effortlessly. How did you manage to slip in and out of both roles?

All due credit should go to Rajamouli sir. He had me glued to the story and character. He was open to discussions. If I had any doubts, I would go to him and he would explain them to me. As far as the contemporary character goes, it was easy to do.

For the period role, there were challenging factors. The main thing was wearing the heavy dresses in hot weather. We shot at Ramoji Film City and in the Rann of Kutch area where there is white sand. The geographical locations were good but it was difficult to shoot. The sand would reflect the light. Below the white sand, there were salt crystals. I had to dance on it at 50 degrees temperature. I got sun burnt.

I saw Magadheera several times to comprehend the magnanimity. I was spellbound. It is creating history in Indian cinema.

'Who gets to live the life of a princess?' 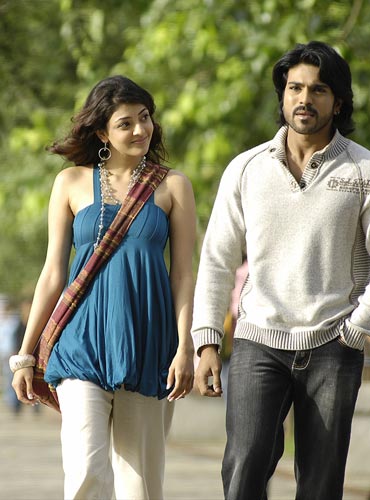 Would you rank your role in Magadheera as one of your career best ones so far?

My career has just started. Yes, till date, it is. Who gets to live the life of a princess? Of course my parents treat me like a spoilt child.

After Magadheera, you are at the pinnacle of your career. Everyone wants to sign you. How does it feel to be there?

It's a humbling experience. I feel responsible. I feel overwhelmed to have a record-breaking hit. I have the responsibility to make sure I deliver.

I have to live up to the expectations. I am grateful and thankful to everyone who has appreciated my work. What are we without them?

'I hope to dub for my next film' 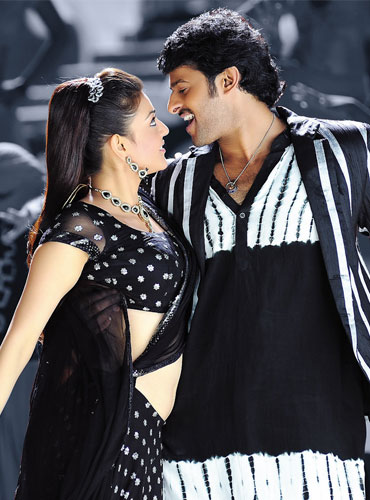 You seem to be well settled in the South. Being from Mumbai, how does it feel to be in the Telugu and Tamil film industries?

I am very comfortable. Right from day one, I met and worked with good people. I am thankful for the way things have shaped up. I don't get to go home though the family visits me. I do miss my friends.

How do you surmount the language barrier?

I am comfortable with Telugu and can converse in it having done more Telugu films. I am yet to pick up Tamil, though. I hope to dub for my next film. I should feel confident of my accent.

How do you unwind?

I practise power yoga. I hang out with family and few friends from Mumbai who are in Hyderabad. I am a foodie and love to try new restaurants. I love travelling too.