'I am dying to do a romantic film' 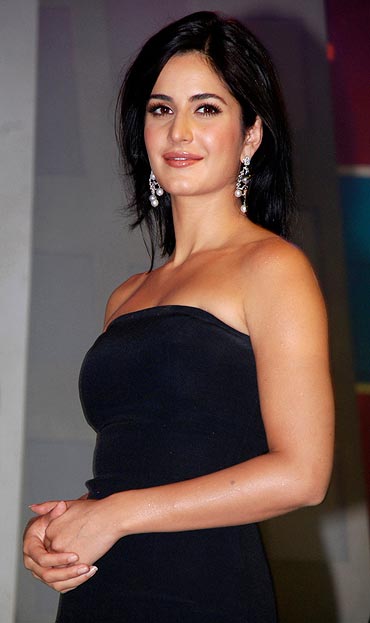 Much has been written about Katrina Kaif's role in Rajneeti, the political thriller written, directed, and produced by Prakash Jha.

In this interview the actress clears the air about Rajneeti, playing cricket on sets, her favourite love stories and lots more...

What was the most difficult part of playing Indu Pratap?

I find everything tough. Be it a comedy or making a speech in front of 5,000 people or a romantic film. Just because it is a dramatic film, doesn't mean I will be any different. I find all my films the same.

You have clarified that your look and role are not modelled on Sonia Gandhi. So what is the kind of research that went behind giving you this look?

It was all Prakash Jha. He gave me saris, salwar kameezes, but I also wear dresses in the film. I wear normal clothes. It is just like how you come to work and don't put too much of thought into what you want to wear. You just pick up a pair of jeans and a kurta.

And you had to work really hard on your Hindi. You said you felt like you were speaking Hindi all these years, but you weren't.

Yeah. The speeches were difficult. You don't talk like that in everyday life. But there aren't too many speeches in the film. Only a part of the film is about politics. Most of it is about life -- jealously, greed and the cards that life has dealt you. When you lose a position to someone else, you feel angry and jealous but you learn to deal with it.

Did you watch other women politicians and draw inspiration from them.

I did watch a lot of our politicians' speeches for the campaigning portions, especially Priyanka Gandhi's.

'If I don't get good reviews and the film does well, I am happy' 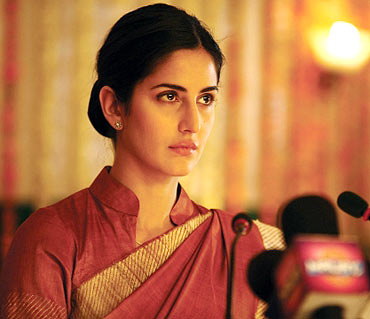 Image: A scene from Raajneeti

How different was the experience of working with an ensemble cast?

It is different. The film is not about you. It is about everyone and you can't think just about yourself and think that you should be the only one that should shine. It was a combined effort. I feel if the film works, then I am more than happy. Even if I don't get good reviews and the film does well, I am happy. Even if I'm not mentioned in the reviews, it's okay.

You are the only female lead in the film. You must have got a lot of attention. Did the others pull any pranks on you?

Of course. They would ask me to get dressed in a sari, saying a politician was coming and we needed to shoot it. But when I came down I realised there was no shoot. The guys would be in their rooms having fun and drinking. But I don't get irritated. They are very sweet people; they make you feel comfortable.

Arjun was like the middle man between the experienced actors and the new comers. He would make all of them comfortable.

I had my share of fun too. I am a huge cricket fan and love to play cricket on the sets. So, Prakashji would be ready with the shot and I would request him to let us play one more game. But the men, of course, don't want you to play because they think that cricket is not a sport for women.

Since you are the lone female lead, you must be really proud of this film?

I love all my films and stand by all of them. If I didn't believe in them, I wouldn't have done them. As far as how proud I am of the film, I will know after the film releases.

Of course. I am the brand ambassador of Royal Challengers Bangalore. I tried to catch as many matches as possible and when shooting for Tees Maar Khan with Akshay Kumar. He made sure we watched all the matches. 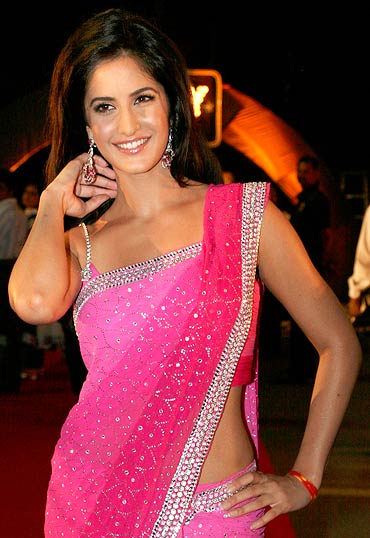 Do you play cricket on the sets of all your films?

No. Not when there is fancy make up and short dresses and skirts.

How was the experience of working with Prakash Jha?

Prakash Jha said the film was adapted from the Mahabharatha. How do you relate the epic to the film?

The characters of the film are such. There is an Arjun, a Bheem...

What about your character?

It is related to Draupadi, I guess.

Do you follow politics? Before Raajneeti or even prior to that?

'I don't think I have to do every script I get' 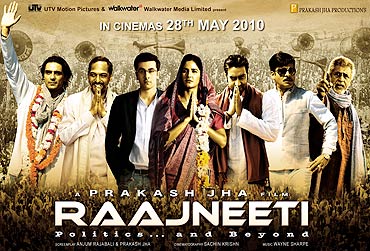 Image: A poster of Raajneeti

Is it true that you will be playing Madhubala opposite Ranbir Kapoor in Anurag Basu's biopic of Kishore Kumar.

(Hits her head in frustration) When a film is in its conception stage, there is a lot of talk. The film is produced by UTV and I have a two-film contract with them so I get a lot of scripts to consider. It is only in the discussion stage. It will be way too premature to talk about it.

Will you be doing an item number for Prabhu Deva's Tamil film?

They asked me, but it didn't work out.

So you are not doing Silence with Anurag Basu?

It is my prerogative. I don't think I have to do every script I get. People just make up stuff and then blame the actor. Did I say I would be doing the film? No. Now, that I am not doing the film, people think I have walked out of the film and that I am fighting with someone.

What actually happens is Anurag comes home and we discuss the script. If I don't think I can do it, I say so and we think about whom to cast. And what comes out of it is that I hate Priyanka... and don't want to do a film with her.

Do people think that we are so insecure that we are friends one day and are fighting and don't want to see other's faces the next day?

The way people perceive us is that we are all insecure, childish, immature, immoral, disloyal, flippant, indecisive... It is horrendous. I just wonder if people see the ludicracy in this. 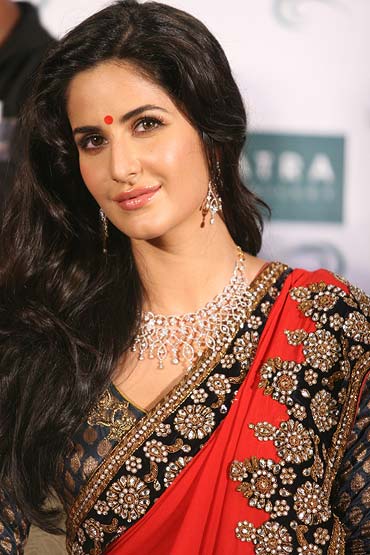 What kind of films do you want to do?

I am dying to do a romantic film.

What are your favourite love stories?

I liked Jab We Met and Jaane Tu Ya Jaane Na. I liked When Harry Met Sally too. I like all the Meg Ryan-Tom Hanks films.

And what are you plans of turning producer?

I am trying to buy the rights of a French film. Once I get that, I might produce it or give to a production house.

Zoya Akhtar's next with Hrithik Roshan, Farhan Akhtar and Abhay Deol. I will be going to Spain. I will then complete Tees Maar Khan and then start work on Dostana 2.

Since you are always travelling, what is the thing that you miss the most?