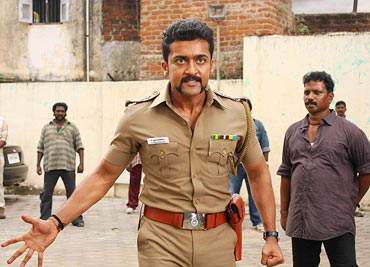 Image: A scene from Singam
Pavithra Srinivasan in Chennai

The duo have come together for the second time, post Vel, which saw Suriya in a dual role with Asin. This time, Hari seems to have gone back to his favourite hunting-ground -- playing a cop.

The shooting-spot itself happens to be a little-used lane in Valasaravakkam. Incidentally, the site of veteran actor Vijayakumar's home.

The scenes themselves are completely action-oriented. Nattily dressed military officers clamber down the make-up van and ascend (with some difficulty) up the first floor's ledge of a nearby mansion. All hold "machine guns," even as a sneaker-clad Hari and his cinematographer stand below, barking instructions.

Villain extraordinaire Aditya stands on the terrace, speaking urgently into his cell-phone, and then, suddenly shouting in stentorian tones, "The police are here. Get him!"

On cue, a long-mustached young man, dressed in typically Southern fashion, lurking about the front door, shoots out of the gate like a cannon-ball. 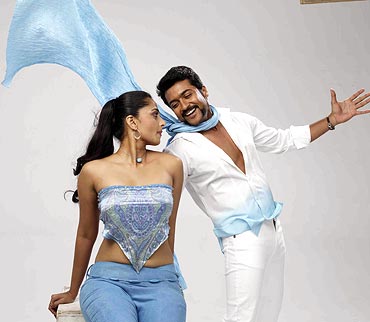 Image: A scene from Singam

A gleaming car draws up, Suriya gets down in a simple white t-shirt and jeans. A short conversation with the director, a look at the monitor and he's off to the make-up van, for a costume change.

Almost inscrutably, the set's atmosphere changes. The production crew buzzes excitedly among themselves, the director's tone is brisker, while the public is charged with anticipation. A cast member readies herself up in a costume, swathing a pink sari around herself.

And when Suriya emerges for the shoot, in a dignified mauve and khaki costume, and trademark Southern moustache, the milling throngs go berserk.

"Hari is a very meticulous director," he affirms, as we catch him for a quick chat. "After all, it's not very easy coming up with a commercial entertainer. It's the repeat audience that makes it a success. And for that, we need something different in every movie. Singam has what it takes." 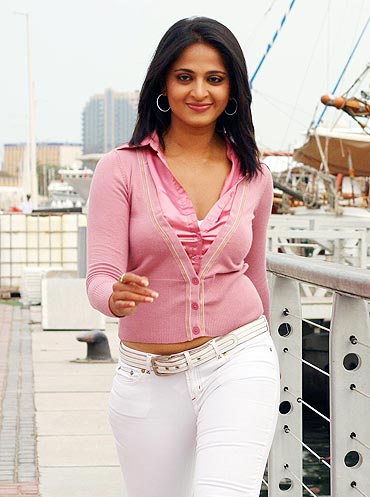 Image: A scene from Singam

The scene's set. Suriya and his co-star begin walking down the road, him looking around keenly, when bullets ricochet off the stacked bricks.

As Hari practically dances around a Tata Sumo, demonstrating exactly what he wants, Suriya stares at the monitor. "It's a cop story, yes, but it has a twist around it. I play Duraisingam, a rural cop who suddenly finds himself in the city, out of his comfort zone. And that's the most I can tell you," he smiles.

The minutes are already speeding by as Suriya dodges bullets with alacrity; hunkers down behind brick stacks and shoots back at a large gang of villains even as arc lights blaze down, the sun scorches and the entire neighborhood watches.

His co-star Anushka is nowhere in evidence, of course, but he has only good things to say about her. "She's one of the most down-to-earth, ego-less actresses I've ever worked with. She's the same with the director of the movie and his most junior assistant. The other day, I saw her running around a travel agent's assistant, chatting comfortably. Working with her was a pleasure."

Time for work to wind down. The sun sets, and enthusiastic fans surround the crew for autographs.