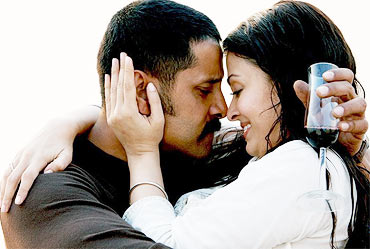 Image: A scene from Raavan
Patcy N in Mumbai

In his upcoming bilingual film, Raavan in Hindi and Raavanan in Tamil, renowned director Mani Ratnam has put the skills of National Film Award-winner actor Vikram to the ultimate test!

In the Hindi version, Vikram stars as Dev, alongside Aishwarya Rai Bachchan (as Ragini) and Abhishek Bachchan (as Beera).

But in the Tamil version, Vikram plays Beera, the part played by Abhishek in the Hindi version! Meanwhile, Aishwarya Rai Bachchan stays on as Ragini while Prithviraj Sukumaran plays Dev.

Imagine how difficult a task it must have been for Vikram, to play two distinct and different roles. Even more challenging? The films were shot simultaneously, forcing Vikram to constantly change his clothes, make-up, body language and mannerisms.

Was it difficult to dub in two languages Tamil and Hindi, considering you are not fluent in Hindi? 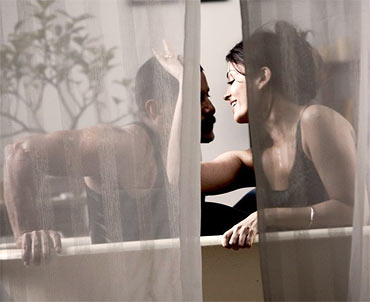 Image: A scene from Raavan

What was your reaction when Mani Ratnam first told you about the two different roles?

When Mani sir told me about my character Beera in Raavanan, I was gung ho about it. Then later he told me, "I have an idea. What about the role of Dev in Hindi? I immediately said, "No!" But he said, "Try. It will be very easy."

I felt it was a cool idea but, I told Mani sir I am a Tamilian and people are going to laugh when I speak Hindi.

How challenging was shooting for both roles?

After the shoot started, it got very challenging. Initially, I thought that AB (Abhishek Bachchan) and I would do Beera and after six months, I would do the other role of Dev with Prithviraj, who plays Dev in Tamil.

But what happened was we had lots of sets and some of the sets actually got washed away even while we were shooting. I have this habit of changing for my characters -- like becoming thin or fat or tanning or growing my hair, stuff like that. But the sets couldn't wait for five to six months. So Mani sir said, "Why don't we do back to back?"

That got really difficult. I would do one shot and quickly run and change and put on the make-up and all the stuff in 45 minutes and change my body language and mannerisms and shoot for another ten minutes and then change back again. So it would get difficult. When you see both the films you will know what I am saying. I was stuck, but I was really excited about the fact that I was doing it for Mani sir. 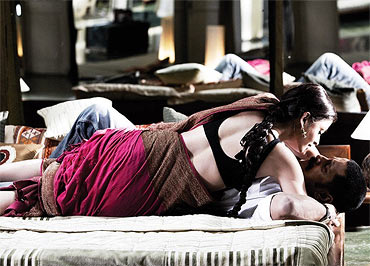 Image: A scene from Raavan

How different were the characters?

The characters were completely opposite. Dev is very cool, suave and stylish. He is very focused and even plans his clothes. He is not a people person. If he wants information, he can be aggressive.

But Beera is very rugged and very dirty. He is not supposed to be good. He loves people. You will find him only with people, not with his family. Through the movie I was wearing ganji (vest) and dhoti. That difference was so incredible.

How difficult was the transition from one character to another?

So I think that was much tougher.

Your film Aparichit was dubbed in Hindi and released here. You didn't get any Bollywood offers after that?

After Aparichit I did get a few offers, but I was little worried that I would not be able to fit in to the mould. It is a really a big step getting into Hindi and I don't have the language skill. I have to learn it. I am worried of coming on sets where everybody is speaking Hindi. It is bit scary for a south Indian.

'I was not in awe of Abhishek, Aishwarya' 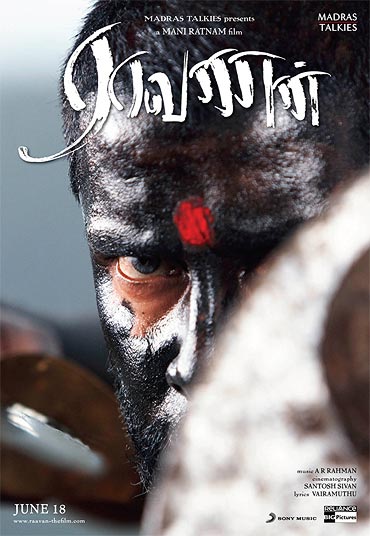 Image: A poster of Raavanan (Tamil)

You play Beera in Tamil and Abhishek plays him in Hindi. Which Beera is more promising?

Abhishek's, of course, because I love him and he is my best friend and he performed really well.

Did you think you were lucky to be paired opposite Aishwarya while her husband was in the same film?

You are trying to get me in trouble [laughs]. Not really. AB is a very good friend of mine. We have been good friends for so many years. I met Ash even before they got married. So we were all friends. In fact I should have been in awe, but I was not, as we are just friends.

Did Abhishek and you exchange any notes?

It was very funny because some time AB would say, "Kenny sir, [Vikram is fondly Kenny] let's push her (Aishwarya) off the bridge and we can go home. We can get this over and done with."

We did not speak much about shots and how to interpret them. I hardly saw any of his shots and he any of mine.

What is very interesting is that Mani sir never told us what exactly he wanted (from Beera). In some scenes if I am pensive, (Abhishek) made it more jovial. If he was aggressive, I was a little low key. So we both played Beera in our own way.

Therefore we never actually discussed shots or how we were going to do it. We did discuss the physical trauma and stress we felt. He would actually tell me which rock is a bit shaky or I would tell him to watch out for the rope. So we spoke more on survival.

'Ash was another hero on the sets' 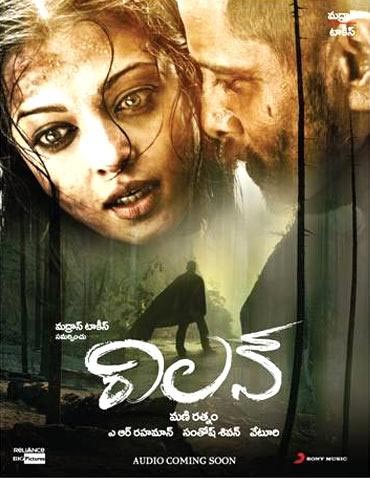 Image: A poster of Villain (Telugu)

Do you as an actor feel fortunate because you got to explore both characters?

Yes, I really loved that, because I come from a stage background. I have done plays all my life, even when I was a kid. Every challenging role is almost like a workshop for me.

Working with Bala, who got me a National Award for Pithamagan, or Mani sir is like going back to acting school. I don't think I ever felt like a hero or for that matter even AB or Prithviraj felt they were hero -- we were all doing Mani Ratnam's film.

You did some difficult stunts. Were you all hurt and bruised during the shoot?

We always felt that when people see this movie they will think, "This is just graphics and special effects." But we did everything. AB and I work out, but I felt Ash was another hero on the sets. She did it all -- twice!

We went three-fourths of the way up the Athirappally Waterfalls of the Chalakudy River. Ash did it all. It was slippery and we were getting hurt and bruised and we were cursing in our minds. When the shooting got over we all said, "Thank God. It's over!"

But now watching it on the screen, I am so happy I was part of this film.