'I don't compete with my wife' 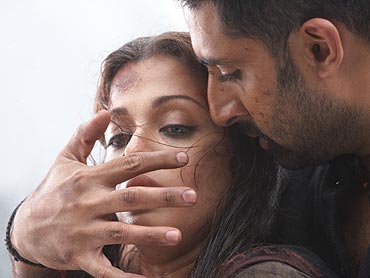 You have to admire Abhishek Bachchan for being so incredibly frank.

Earlier this week, at the music launch of Raavan, junior Bachchan said of the film's director, "Mani (Ratnam) keeps on launching me. Every time there is a down in my career, Mani comes from somewhere and my career goes upward."

We all know this to be true, of course. For evidence, look no further than smash hits Yuva and Guru.

Abhishek plays Beera in Raavan, which is loosely based on the Ramayana epic. He stars alongside his wife Aishwarya Rai Bachchan and Tamil cinema-legend Vikram.

The question remains: Will Raavan revive Abhishek's career? We'll find out soon enough, when the film launches in June.

But, for now, excerpts of Patcy N's interview with Abhishek Bachchan:

You look really mean in the trailer. How are you in real life?

Yes, that is definitely a side of me that I would like to exhibit more often, but good behaviour doesn't allow it. However, if you do a film for Mani Ratnam, he will ask you to do all that.

I am changing the marketing strategy of the film industry. Till date we have shown you nice, romantic, beautiful photographs after every film. But now we will show you scary trailers where we will make faces and scare you. The trailer worked, so this is my new strategy.

You gave a power-packed live performance at the music launch. Were you prepared for this?

I landed just five hours ago (from the US), and Mani said, in typical fashion, 'It is easy. You just come on-stage and do one bit and that's all.' I said no problem.

But when I arrived here, he wanted me to perform the entire song (Thok De Khilli). With Mani you know that there is always a surprise. But it was fun! 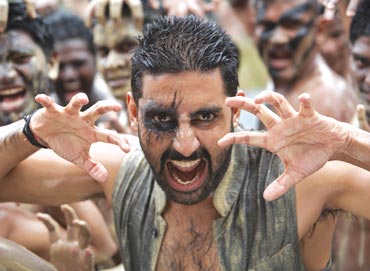 And did you have to do lots of hard work for the music launch?

I work very hard for the movie. So why not for the music launch?

We are actors. It is our job to put our work out there, and to make sure audiences watch it.

Mani is a very shy person who does not like to give interviews. I have always told Mani, from day one, that we must do something special for the music launch, and that we must do it for the media. Apart from the fact that the media is the medium through which we put out our work, it is also (the media) who do lots of work for us. And sometimes against us, but that is fine. It is necessary that everyone should be given equal importance.

First, we thought we should have a huge music launch and call lots of people. But then we decided on just a media event. Mani asked me whether I would perform for the media and I agreed.

I think it is a wonderful idea. I have never seen an audio launch like this before.

You have worked with your wife Aishwarya before. Is there a challenge to perform better than her?

No. I don't compete with my wife. I think she is one of the best actors we have in the film industry. Her work speaks for itself. I don't need to compete with anybody; the only person with whom I have to compete is me.

'Mani gave me license to do whatever I wanted' 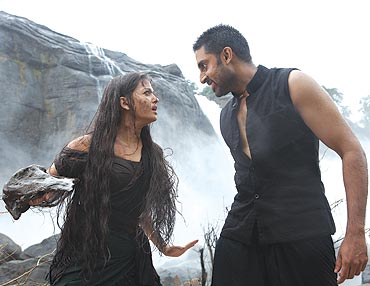 It is said that both Ram (Good) and Ravan (Evil) are in every human being. How close are you to Ravan?

In the film, my character, Beera, has a pet name: Raavan. I think every human being has a good side and a bad side. There has to be balance to stay stable, so that one doesn't overpower the other. I think that somewhere there is a dark side to me too; and it comes out from time to time. It came out a lot while working on this film.

Mani gave me license to do whatever I wanted, because Beera is unpredictable. He will smile one minute and cry the next. He can fall in love with you in a minute and hate you the next. He is a character with whom you can experiment, because you can do anything with him and not go wrong.

When Mani and I made Guru, there was a very definite frame work within which we had to place the character. There were certain things that Gurukant Desai [Abhishek's character in the film] just would not do.

The great thing about Beera was that it was challenging and fun, because there was absolutely no frame work. You could do anything you wanted and get away with it, because he is unpredictable. Mani said, "Do whatever you want and be convinced about it. If you are convinced about it, your performance will improve."

Who is Beera? Is he a Naxalite leader? Why is he kidnapping Ragini?

Beera is not a Naxal leader nor is anything based on the Naxalite movement. There are no characters based on real people or mass movements. Beera is from a small town from Madhya Pradesh, central India and that's it.

What's wrong in being Ravan?

I don't know Ravan. But I know Beera. He feels he is right in whatever he does, and is a very clear person who sees things in black and white. There is no grey in the film.

To Beera, you are either right or you are wrong. If you are right, he will love you. He will give his life for you. But if you are wrong, he will take your life. Beera is very pure, and it was very interesting and difficult to make somebody an anti-social element on the surface whose heart is actually very clear. I thought that was a very interesting aspect about Beera. Here you have a character who looks and behaves completely mad, but once you get to know him you see he is very pure and innocent.

'I do what my heart tells me to do' 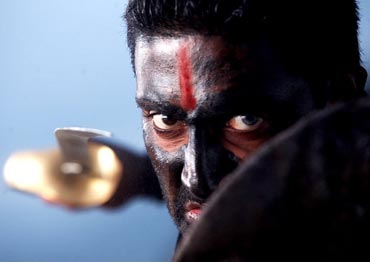 The promo shows you jumping from a 90-foot cliff. Is that really you?

I don't know, because three or four people dove that day.

Originally, Mani said, "I can't allow you to jump." Plus the insurance people said they couldn't allow the main actor to do it.

But me being who I am, I decided to jump. So I did thanks to a professional diver who trained me. The professional diver also jumped, and I don't know which shot they have kept. Lots of people jumped, but the best divers were the local kids, who were around 5 to 6 years of age. They jumped for money!

You play a negative character in the film and that too opposite your wife. Aren't you worried how the audience will react?

First and foremost, let me tell you that if Mani Ratnam asks you for a film, you don't say no. Mani is the best director we have and is respected by all his colleagues. So you would be a fool to say no.

Secondly, even if he asked me to be a tree in the background, I would do it, because he means so much to me as a friend.

I have approached my career on a very emotional level, and have never been very good at strategising. I do what my heart tells me to do. If my heart is not into my job, I will not be able to be completely honest.

Lastly, when you see the film you will understand that such a thought would never appear in my mind.

You play a character. You don't necessarily think, "I am opposite my wife!" If you see Sarkar Raj, it was the film we did after marriage. And it did not have a romantic angle.

Aishwarya and I may happen to be a real-life couple, but that doesn't mean we are going on a holiday. We are going there to do a film, because we believe in the director, script and the characters. That is what comes to me first, not who I am paired opposite.

'The films I've done with Mani will always be remembered' 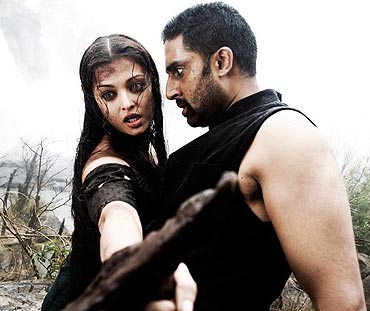 You said that Mani has re-launched your career many times?

You are remembered by the work you do. I am lucky that I have a director like Mani. The films I've done with him will always be remembered. I walk down the street and people still call me Gurubhai, though nowadays they call me Idea sirji. People remember you by your character. He gave me Lalaan Singh (Yuva) when no one was giving me work and my films were not doing well.

What are your expectations from the film?

I am optimistic and hopeful about all my films, and want them to do well. Raavan is very special to me, because it is directed by Mani Ratnam and has my wife in it. It is a film for which I have worked very hard. I have really put my life and soul into it.

I want the audiences to like it. If they don't, all your efforts go down the drain. We do everything for the audience. If Raavan's trailer is doing well, it means people are curious about the film. We hope that we, the Raavan team, live up to their expectations.

What was best compliment you got from the trailer of Raavan?

My father turned to me and patted me on the back, and said, "Well done." And then he said Aishwarya was better than I was.