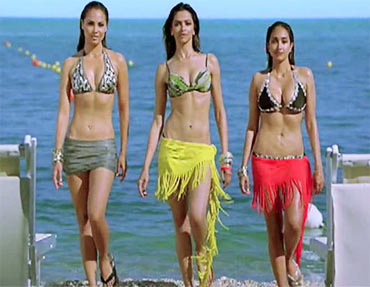 Most of our comedians are very male indeed.

Not just the specialist comedians, but our best leading men seem more than comfortable with comedy, while their heroines seem content standing there looking stupid -- which really doesn't seem like acting.

With Sajid Khan's Housefull hitting theatres this Friday and starring four women -- Jiah Khan, Lara Dutta, Deepika Padukone and Malaika Arora Khan -- and presumably saving the lion's share of the comic acting for the men, here, in no particular order, is a look at the finest and funniest ladies we've ever had: 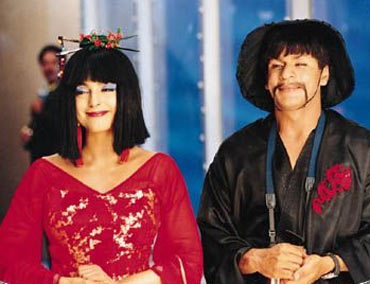 Few leading ladies are instantly recognised for their comic timing, but Juhi belongs to a rare breed indeed.

Always a natural actress, Juhi really came into her own with comedies, with films that required her to go over the top as well as those that needed more subtle touches.

Her distinctively mad ha-haa laugh showed a talent for laughing at herself, and Juhi always seemed game to go delightfully mad for the cameras. 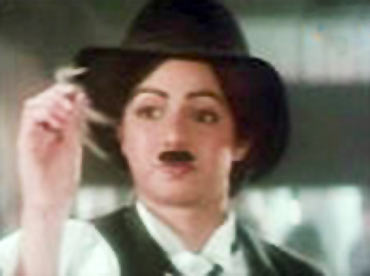 The queen of funny faces.

Sri often rolled up her sleeves, stuck out her tongue and plunged enthusiastically into sheer slapstick, content to fall over or be kicked in the backside, anything for a laugh.

Her style of humour is best exemplified in films like Chalbaaz, where she plays both timid and tigress with fantastically funny vitality, and Mr India, where she takes a simple dedicated-reporter persona and brings it hilariously alive -- even dressing up as Charlie Chaplin for a bit.

As said, anything for a laugh. 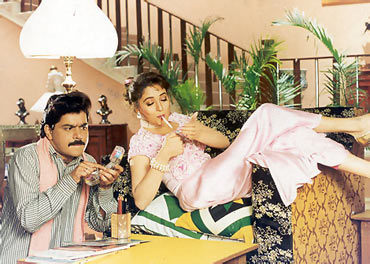 Arguably the finest leading lady in Hindi film history, Dixit was versatile enough to pull off every kind of cinema.

She dabbled with comedy mostly alongside Anil Kapoor -- keeping hysterical films like Ram Lakhan grounded, and flying whimsically off with films like Khel -- and Aamir Khan, their Dil leading to a spate of young romances.

And in her career's biggest hit, Hum Aapke Hain Koun, she shows off a kind of effortless comic magic that very few are blessed with. 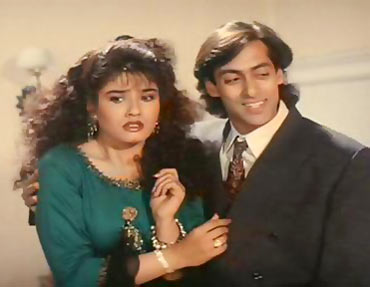 It takes an actress with rare verve to let her hair down and match up to the comic stylings of Govinda, but Tandon managed to be as stupidly spunky as she was sexy and turned into a perfect foil for the comedian, their loony chemistry making those David Dhawan farces work.

And don't forget her terrific starring role in one of the most popular comedies of all time, Andaz Apna Apna. 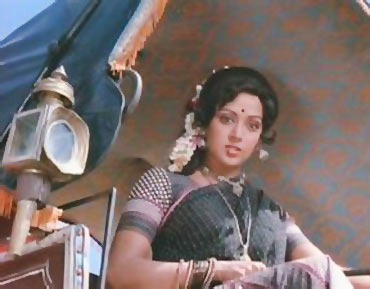 She owns the most iconic female comic character in all of Bollywood, but Sholay's sassy blabbermouth Basanti isn't the only impressive character in her comedic oeuvre.

Hemaji's shown some fine comic timing over the years, paired often opposite husband Dharmendra in films like Seeta Aur Geeta and Amitabh Bachchan in films like Satte Pe Satta and Do Aur Do Paanch, often playing a feisty girl too street-smart to be fooled.

But yes, that legendary taangewaali looms unforgettably large over it all. 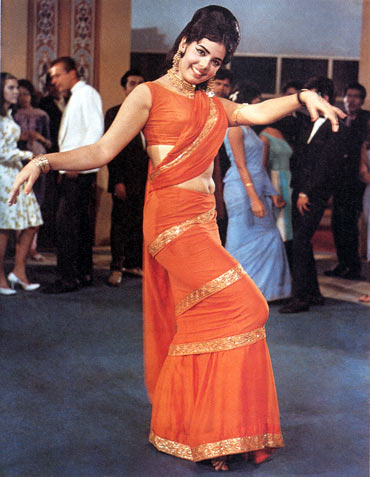 Acting for only a dozen years, Mumtaz made over a hundred films, most of her roles requiring either oomph or laughs, both of which the actress delivered fantastically.

Films like Pyaar Kiye Jaa with Kishore Kumar, Shashi Kapoor and Mehmood, Chor Machaye Shor opposite Shashi, Ram Aur Shyam opposite Dilip Kumar, Brahmachari with Shammi Kapoor and Lafange opposite Randhir Kapoor all show how the actress could not just make any hero look better, but would bring a degree of comic credibility to the role. 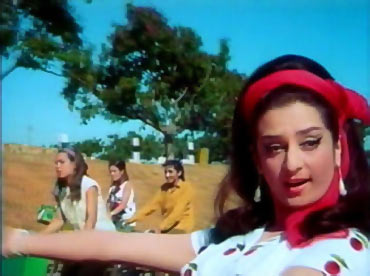 The striking Saira made her acting debut at the age of seventeen, opposite Shammi Kapoor in Junglee.

Instantly, an actress with spark and verve was discovered, and Bollywood wasn't letting go.

Banu tried hard to be taken seriously as an actress, signing on several dramatic films, but will forever be best remembered for her lighter roles, for films like Bluff Master, April Fool, and, above all, the comic classic Padosan. 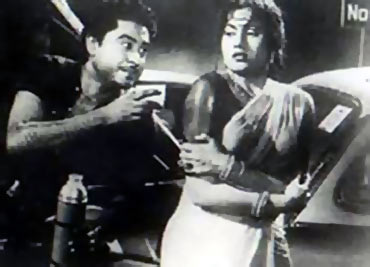 Like all iconic actresses, the ethereal Madhubala transcends genre and excelled in every kind of cinema.

Comedy was just another facet, and she positively shone whenever she attempted it, her natural spontaneity lending her wings.

From the girl drenched in the rain in Chalti Ka Naam Gaadi, to the snooty heiress in Mr & Mrs 55, to just a smitten young thing in Half Ticket, Madhubala did it all, and held her own with delicious style. 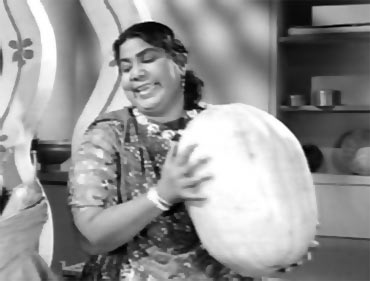 She might not have been a leading lady, but this groundbreaking actress needs to be heralded, and loudly.

Born Uma Devi Khatri, she was a successful singer who turned to acting much later, and once Babul co-star Dilip Kumar gave her the now famous nickname, she eclipsed her previous achievements with bombastic grace.

Over her long career, Tun Tun acted alongside top comedians like Bhagwan Dada, Agha, Johnny Walker and the like, and established herself as an equal in every way. Hats off.