Pairing with Vijay in his 50th film! 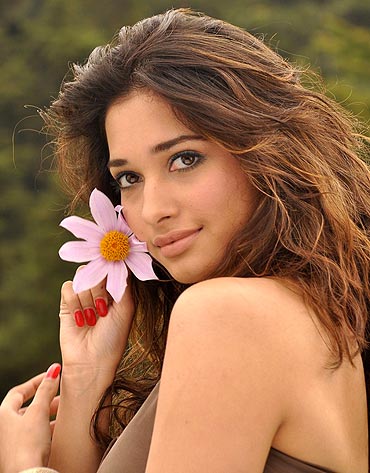 Image: A scene from Sura
Radhika Rajamani in Hyderabad

After the successful Paiyya, it is Sura with Vijay in the lead, for Tamannaah.

The Tamil film is very important for Vijay as it is his 50th film.

It's a very prestigious film for the young actress too. The film releases on April 30.

So what is the film about? Vijay's heroine tells us more. Excerpts:

When I heard the script, I found a lot of comedy which was entertaining. In fact, it was the comedy that made me do the film. Since it was Vijay's 50th film, it was a special one too.

Has Sura something to do with fishermen as it means shark?

Yes, it is set with a fisherman's backdrop.

'Sura is not a love story' 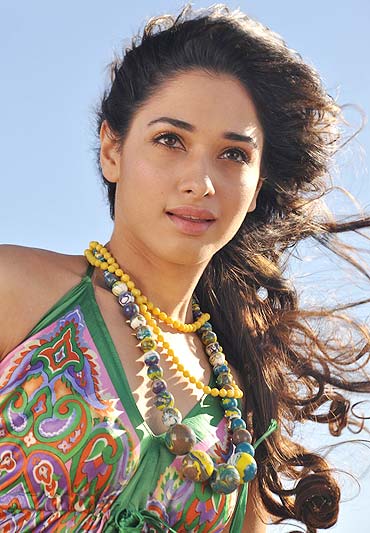 Is it one of the typical Vijay films filled with action and masala?

The film has all the commercial elements to make it entertaining. It has logic too. Overall a film should be convincing and entertaining for it to click. This one will.

Is the love element predominant?

The film is not a love story but there is a love track. I play Vijay's love interest.

The film is shot in many villages on the coast of Tamil Nadu. Did you interact with the fisherfolk there?

I didn't get a chance to. I do have some scenes on the beach but I didn't interact with the fishermen.

Can we expect to see a number of 'fisherfolk' dances?

There is an intro song by Vijay which feature fishermen dancing. There is another local dance but not with fishermen. 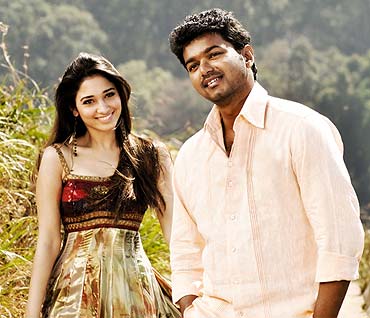 What is your role in the film?

My character is a cute girl -- rich and flamboyant who falls in love with a fisherman.

So, is it one of those rich-girl-falls-for-poor-boy stories?

No, the love story is not the main part of the film.

Your costume designer Priya Manikandan said that never before have you been dressed in such a light, sensual and hot outfits. Your comments?

The clothes Priya gave me were cute. They were all western, nice and appealing. Whether they're sensual or not is for the audience to decide.

Vijay, also known as Ilayadalapathi, is quite a phenomenon in Tamil Nadu. As a co-star, how was it working with him?

I found him to be very calm but spontaneous during the shot. He's forever thinking of new nuances which would accentuate the scene. His dance is impeccable. I have never seen anybody dancing as gracefully as him.

'It was fun to work with Rajkumar sir' 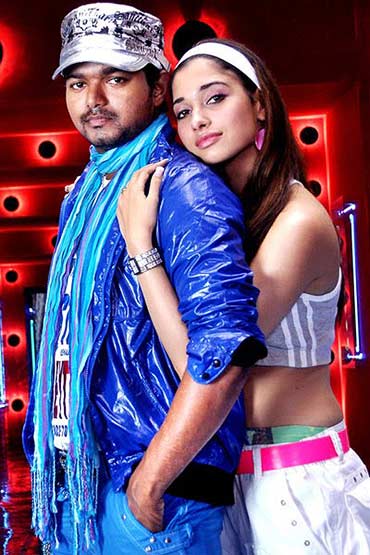 What is special about this film besides the fact that it is Vijay's 50th film?

It's a well-made and entertaining film. It was enjoyable working on the film. I am hoping it will do well.

How was S P Rajkumar as a director?

I worked with Rajkumar sir before when he was the co-director of Vyabhaari. So the comfort level was there. He let me improvise. It was a lot of fun.

There doesn't seem to be much publicity for the film.

Well Sun Pictures has taken the film and they will do it their way.

Will you be going to Chennai to promote the film post-release?

Yes. I'll go once the film is out.

'It's been a long time since I've had a break' 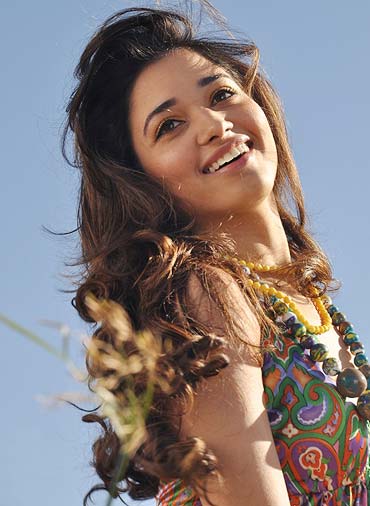 You are taking a break now. How are you enjoying it?

I am relaxing at home in Mumbai. It's just been a few days. After that I'll think of what to do. The break is for 15-20 days till I begin the shoot of my next Telugu film Badrinath. It's been a long time since I've had one of these breaks.

So you are now doing two Telugu films...

Yes. Badrinath and another one with Naga Chaitanya to be directed by Sukumar.

Have you signed any Tamil films besides the remake of Vikramarkudu?

I'll be doing a film with Dhanush directed by Hari which is not on the floors yet. My Tamil film Thillalangudi is likely to release in June.