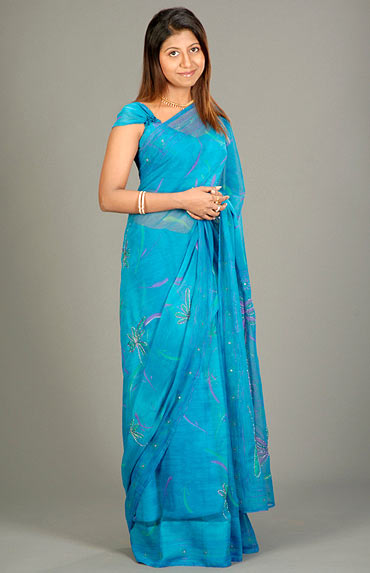 Reality shows are all the rage, these days. Dance, song and games have been ruling the roost in Tamil TV for quite a while now.

So it was only a matter of time before an enterprising producer decided to bring in a make-over show as well, and that's what Keerthana has done.

Once you learn who her mother is, though, you're not very surprised. Meet veteran actress Kutty Padmini's daughter as she shares insights about her show Arukkani 2 Azhagu Rani (or A2A, as its known) to rediff.com:

We have so many reality-based shows on Tamil television. This is, I think, the first reality-based make-over show. We have around 10 to 15 contestants -- all women, of course -- from the age group of roughly 18 to 30, in one house, 24X7. They're from every walk of life -- college students, housewives, entrepreneurs, and others.

The show is all about how they interact with each other, get make-overs and win over each other in various situations and contests. And we're bringing in popular designers, stylists and photographers as part of the make-over process. Eventually, one winner emerges, and she's the Azhagu Rani (Beauty Queen).

'The show proceeds along the lines of America's Next Top Model' 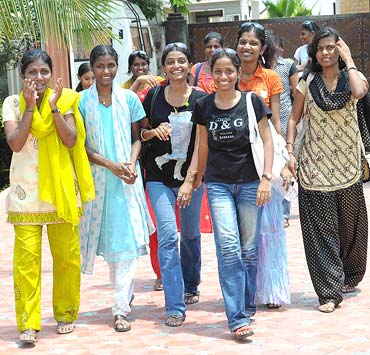 Image: Contestants from the show

The format seems similar to Big Brother/Big Boss, doesn't it?

In terms of all the contestants living under one roof day in and day out, maybe. But that's where the similarities end.

The show will proceed more along the lines of America's Next Top Model. Of course, our emphasis will be more on developing the contestants' personality. We'll be arranging self-defense classes, sessions on etiquette, handling yourself in any kind of situation. The show's all about making them all-rounders; women who become more refined, you could say.

How do you choose the show's contestants?

Our main criteria was that the participants should be reasonably out-going, and be genuinely interested in getting a completely new look. We wanted people who were ready for a challenge; who'd say, "I need to change my life around." After all, women who are incredibly shy would find this more a chore, than something enjoyable.

The intention is to take these people and give them the tools necessary for a better life. Then too, we need spice, after all. It adds drama if the contestants kind of go against each a lot. As it is, the house is full of strong personalities, so there are plenty of quarrels and arguments!

'Though being a celebrity's daughter, I received no special treatment' 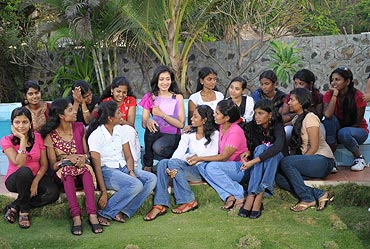 Image: Keerthana with the contestants of the show

Some quarters have objected to your usage of the name Arukkani, claiming that it's derogatory. What's your take on that?

Trust me, that was never our intention. My inspiration for the name came from Suhasini's famous role in Gopurangal Saivathillai in which she plays the unpolished Arukkani who suddenly transforms into a refined, beautiful woman. That's the template for the show as well.

People didn't take it in the right sense. We never meant for the women to be tagged as uncouth, unruly people and Arukkani certainly isn't meant to denote an ugly woman. It's just a name that was catchy, and seemed right for the situation.

Your mother's name is synonymous with great serials and shows on Tamil television. How has her input helped you?

My mother is an extremely strong woman. Enterprising, creative and with the guts to go ahead. I don't deny that her presence in the industry gave me a ready made platform to go ahead here. Even so, she treated me as she does everyone else. I may be her daughter, but I received no special treatment.

While I apprenticed under her, she would scold me in public for the mistakes I made. I didn't understand it then, but it taught me to be perfect in my work, and to be a professional. Her support and expertise are invaluable to me. And then, there's the personal side too -- I mean, come on, she's my mother. I still run to her when I'm sick. 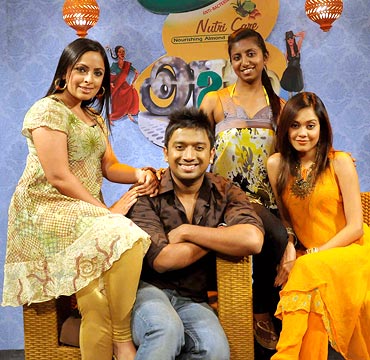 Image: Contestants of the show

You've forayed into television. What about movies?

Right now, I'm working as AD (assistant director) to director Agathiyan. It's my aim to someday become a director, write my own screenplays. I even did a dual diploma in the New York Film Academy. I've always had creative leanings.

Although I am involved in a couple of more projects on television -- I dubbed for the lead role in the serial Sahana -- what I'd really like to do is go global.

I'm inspired by directors like Martin Scorsese. In fact, every director who's had the guts to come up with a film on their own. My focus is much more on docu-features, though, and Indian-English movies.