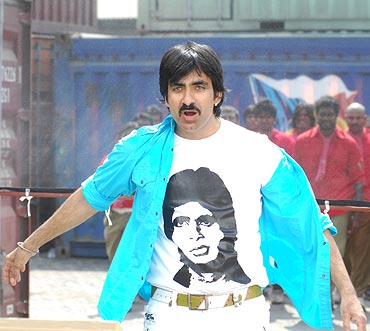 Image: A scene from Don Seenu
Radhika Rajamani in Hyderabad

The title of the Ravi Teja-Shriya Telugu starrer that is releasing on August 6 is Don Seenu. Seenu is a common proper name (generally short for Srinivas) in Andhra Pradesh.

Don Seenu, directed by debutant Gopichand Mallineni, is said to be inspired by Amitabh Bachchan's Don. In fact, Ravi Teja's t-shirt in the film also has a picture of Big B on it.

Director Gopichand has worked with A R Murugadoss, Srinu Vytla and Meher Ramesh before embarking on his debut venture.

Kona Venkat has written the dialogues for Don Seenu. Sameer Reddy is said to have shot the film with the Super 35 camera. Raju Sundaram choreographs the songs.

The film is produced by Venkat on RR Moviemakers banner and co-produced by V Suresh Reddy. 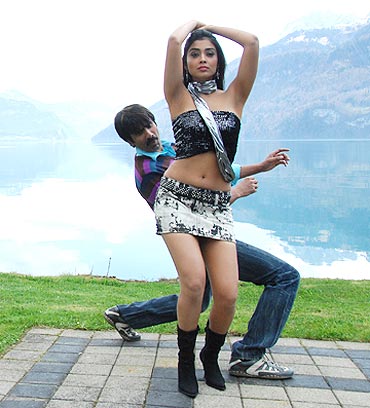 The protagonist in Don Seenu wants to be a Don and models his life on the character played by Amitabh in Don. That's the reason for the title Don Seenu.

Don Seenu is also Hindi actress Anjana Sukhani's maiden Telugu film. She has a Kannada film Maleyali Jotheyali with Ganesh to her credit. 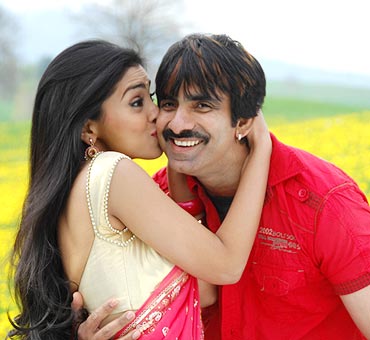 Shriya, who has done some item numbers in movies in like Thulasi, Munna and Devadasu returns to Telugu films. Her last full-fledged Telugu film before she left to act with Rajnikanth in the Tamil film Sivaji was Bhageeratha (with Ravi Teja).

Shriya sizzles in the Don Seenu stills. She plays a student residing in Germany where she meets the hero (Ravi Teja) and falls in love. Quite a bit of the film is shot in Germany. 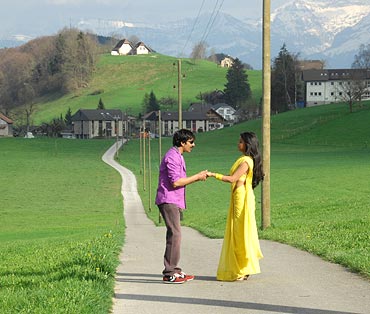 Ravi Teja's films are action entertainers with a mixture of comedy interwoven. His very presence triggers laughter among the audience.

In Don Seenu he has other actors like Mahesh Manjrekar, Sayaji Shinde and Srihari essaying rival dons.

Of course, no Telugu film is complete without songs shot in exotic locales abroad and Don Seenu is no exception. Switzerland and Spain feature in the songs. Mani Sharma has composed the music for this film.

The climax scenes are filmed in an aluminium factory on the outskirts of Hyderabad, and in fact the press conference was also held in the very factory a few days ago.