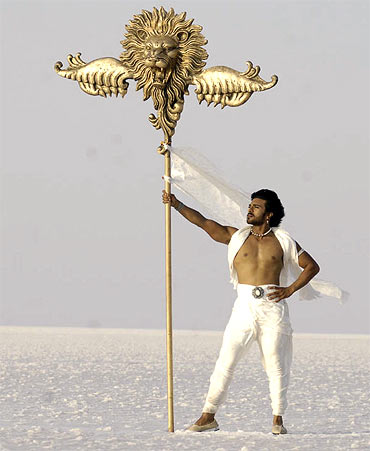 Get your low down on what's happening in the Telugu film industry right here!

Since reincarnation themes were not very common in Telugu films, this reincarnation saga which was set in two different 'historical' time periods found favour amongst the audience.

The film, which scored brilliantly on the technical side (art, music, cinematography, editing) and the special effects and graphics was also released on Blue Ray DVD after a few months.

This film gave the film's hero Ram Charan a much-needed hit and ushered in more films for heroine Kajal Agarwal.

Though the runaway hit Magadheera ran in many theatres for weeks, it had a dream one-year continuous run in Kurnool's Nandu Lakshmi theatre from July 31, 2009 (the day of release) till July 31, 2010. 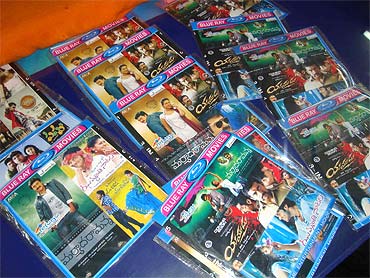 Image: A picture of pirated DVDs

Piracy is a menace pervading through the film industries in the country.

Telugu too, is no exception. Umpteen measures and stringent steps taken to curb it have not met with much success. So much so, it has become quite a nightmare for the film people. The moment a new film releases, people swoop on it and make a roaring business out of making DVDs (of 3-4 films) on the sly in a jiffy.

The recent case is that of Maryada Ramanna where the pirated DVD's were out within the first week of release.

"Everyone is aware of who does it but nobody is able to tackle it from the root. It can't be done by one person, a united and concerted effort is required to stop this," says Rama Rajamouli (stylist and wife of SS Rajamouli, director of Maryada Ramanna).

Some months back Leader too had met with the same fate. Within the third or fourth day of release, the hero of the film Rana Daggubati had seen the pirated DVD's of Leader along with his uncle Venkatesh's films while on his promotions in Secunderabad.

Surely piracy jolts filmmakers and it needs to be confronted with a serious thought and strong strategy.

From art direction to acting 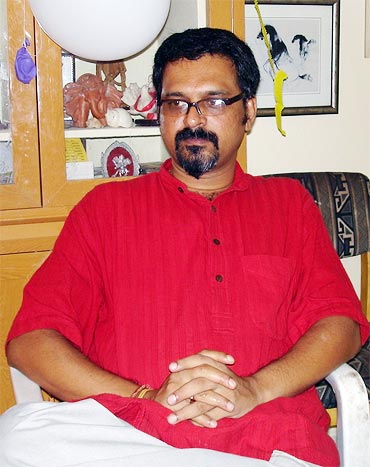 Rajeev Nair, better known as an artist and art-director in Telugu films has started making cameos in movies.

Originally from Kerala and educated at Santiniketan (BFA, MFA), Rajiv made Hyderabad his home a few years ago. Inclined towards the arts since a young age, Rajeev learnt Kathakali for six years, gave performances and acted in plays during college. Rajeev has written poems too.

He was fascinated by cinema, especially the works of directors like Aravindan, Bharatan and Padmarajan and was slowly drawn to it.

"When I heard art director Ashok Kumar is Bharatan's nephew, I wanted to work with him. The first film I worked on is Okkadu and subsequently worked on all big-banner projects with Ashok Kumar. I also worked with foreign producers like Robert Jenkinson and Gary Constable on some Hollywood projects which were being shot at Ramoji Film City," says Rajeev who branched off independently in a few years.

As an art director he has films like Gamyam, Vaana, Maska, Jayeebhava, Village lo Vinayakudu, Mouna Ragam, Prasthanam and Vedam.

Rajeev has done cameos in films like Shankardada MBBS, Simhadri and the recently released Mouna Raagam and Vedam. He plays assistant to comedian Ali (the musician in Mouna Raagam) while he played a doctor in all the other three films.

Acting happened in the course of his art direction work. "I used to be on the sets so if anyone asked me to do a role, I would do it. Acting is not my primary aim and if it doesn't disturb my work, I will do it."

In between juggling his art direction and films, he also teaches art direction as a guest faculty in the Telugu University and holds painting exhibitions every year.
More
Write a
Comment
Print this
article