When Rajnikanth, Chiranjeevi shared the stage The ball room of the Taj Krishna in Hyderabad was jam packed in anticipation of superstar Rajnikanth and the gorgeous Aishwarya Rai's presence at the Telugu album launch of their much talked about film Robot (Endiran in Tamil) .

Though Ash's absence (she is down with fever) was a trifle disappointing, Rajnikanth came, spoke and conquered!

The crowd (mostly media and guests) was made to wait for close to two hours but were in raptures when the superstar made an entry at 8 pm shouting "Thalaiva, Thalaiva".

Tamil actor Bharath and Kaamna Jethmalani along with a number of people from the Telugu film industry were also present. It was an evening of fun with the bonhomie and camaraderie interspersed with friendly digs between the actors.

'When we think of Avatar now, we'll think of Robot' 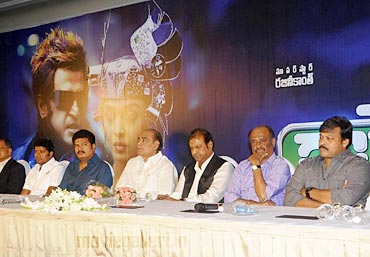 Jhansi anchored the audio release function held on a huge dais against a backdrop of a film poster featuring Rajni and Ash.

Saksena did the opening honours by speaking about the film. "We worked two years on it and the product is fantabulous. The film will have a three-language (Tamil, Telugu, Hindi) all-India release."

The lyricists -- Bhuvana Chandra, Suddala Ashok Teja and Vanamali -- were the first to speak about their experience of writing the songs and were naturally overwhelmed at the opportunity given to them.

Anthony (editor) said "it was good editing this film. It was difficult, challenging, yet fine."

Ratnavelu (cinematographer) mentioned that "Robot is a fantastic film" and that he is "proud to work with Rajni sir and Aishwarya. Shankar is going to raise the bench with the movie and I thank Kalanidhi Maran for producing the film."

In fact all those involved with the film thanked Kalanidhi Maran profusely for producing this high-budget film which is touted to be the costliest in Asia.

"I have no hesitation in saying that Robot is not far behind Avatar. When we think of mountains, the Himalayas come to mind and when we think of Avatar now, we'll think of Robot," said Ramesh Prasad.

Meanwhile, Kajal Agarwal considered it her "honour to share the platform with legends. "I am waiting to watch the film with bated breath," she says.

Rama Naidu on the other hand wanted Robot "to create a record and be a hit." 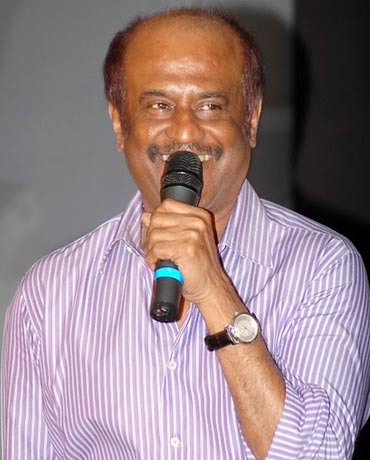 Director Shankar started off by saying it's easy to direct a film rather than talk about it and outlined the three highlights of Robot as "story, Rajni's character and the visual special effects and computer graphics.

No one has done the role of a robot as it's very difficult to do, he added.

"He's (Rajnikanth) given a good performance which reminds me of Jack Nicholson. Sabu Cyril's sets have been compared to Stanley Kubrick's films. The Ash-Rajni combination is special. They are charismatic artists and it's a treat for the audience. Danny plays the villain," he added.

Hailing Rajni as aatmeyudu, snehitadu (friend) after their 30 year association in the industry, Mohan Babu said, "it would a big challenge to any actor to put on makeup for several hours. I know how much struggle my friend Rajni went through in the process. I wish that the film should run for a number of weeks."

Finally the superstar took the mike amidst a roar of applause. His simplicity and down-to-earth demeanour was apparent right from the beginning.

Addressing Shankar as the real hero, he said, "I can write a book on the making of Robot and am seriously thinking of doing so. It's been a wonderful experience and I'm happy that Chiranjeevi is releasing the audio. I am grateful to Kalanidhi Maran for stepping in to produce it when the film came to a halt. Rs 140-150 crore is not small change. Kalanidhi Maran gave total encouragement and even threw a party at the end of the shoot which is normally not done. I had heard of the script and that it was narrated to Shah Rukh Khan. When Shankar called to meet me, I thought maybe he wanted to offer me the villain's character. He said I have to play the hero -- robot. Then he said the heroine is Ash. I was shocked. More than entertainment, Robot will be an experience."

'Shankar is a director with guts' 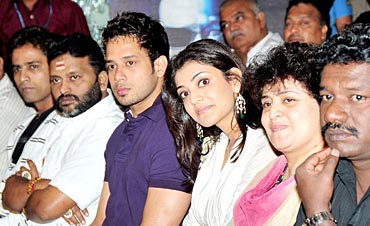 Image: Bharat and Kajal Agarwal (in the middle)

Chiranjeevi finally took the stage and added to the fun.

"When I was in two minds whether to join the film industry or not, I saw Rajni. I thought when a simple man like him can become an actor, why can't I?"

The superstar who entered politics was a bit envious of Rajni after seeing the trailers of Robot.

"I thought Rajni will enter politics, so I plunged into it early. But, he did not, and made Robot. I feel cheated since I have entered politics and can't back out now. Recently, my fans asked me to do a film, but I said no. After seeing the trailers of Robot, I feel like doing a film again. If at all I do a film in future, it would be thanks to Robot."

Chiranjeevi hoped that he would be offered a film by Shankar.