Sign in  |  Create a Rediffmail account
Rediff.com  » Movies » I have had a very long relationship with cops

I have had a very long relationship with cops 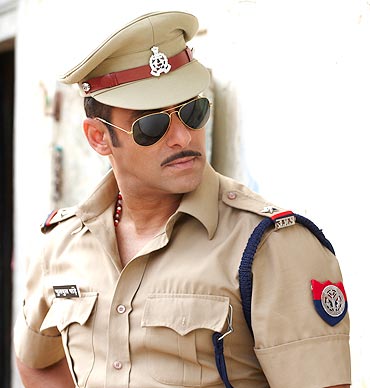 Image: A scene from Dabangg
Nithya Ramani in Mumbai

Salman Khan puts on a cop act once again in his forthcoming film Dabangg. But unlike his previous outings in Garv and Wanted, this one is very corrupt, and looks very interesting.

Salman tells us what to expect from his latest action film.

You're looking very young in Dabangg.

Arre, I was told I look very mature in the film!

I had lost a lot of weight and was looking really ripped when Arbaaz asked me whether I had ever seen a ripped corrupt cop. But I saw Sonu Sood working out for hours and getting a chiseled body. Arbaaz told me not to compare myself with him and that I should play my role.

I didn't agree initially but later realised that he was right. A muscular cop didn't suit the role. But I would feel bad every time I saw Sonu working out. Then I would think, 'tujhe kahi aur, kisi aur film me dekh lenge (I'll see to you at another time, in another film).' [laughs] 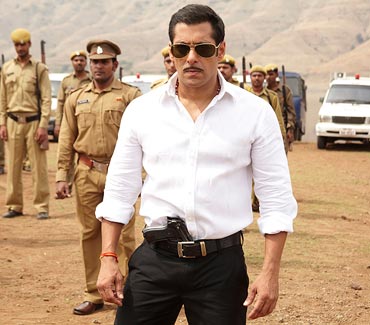 What was your reaction when Arbaaz came to you with the script?

When I heard the script, I said it was outstanding. He thought I was making fun of him. But I had really liked it and told him that we will discuss it the next day. He thought ab yeh script toh gaya (now the script is done for). Next day, I called him up and asked for the script and he still thought I was joking with him.

You grew a moustache for this film, which is quite unusual for you.

Arbaaz would come with different kinds of moustaches and ask me to grow mine like those, about six months before the Dabangg shoot started. I was shooting for another film then and did not want to grow a moustache. I decided to keep a small one for Dabangg. On the first day of the shoot, I tried different moustaches but kuch jamaa nai (nothing worked out). So I thought I'll shave it.

The first time I ever wore a moustache was when I was to do a Raymonds campaign. I was 15 years old then. Gautam Rajadhyaksha had shot my pictures on a terrace, and I had worn one of his jackets and a false moustache to look older. They (the ad makers) liked the photo and selected me. But when they saw me, they said baccha hai, ghar ja (you're a child, go home).

I had to chop my hair off in Dabangg. Tabhi Veer se nikla tha (I had just finished shooting for Veer) and I didn't want to cut my hair too short. Itne mushkil se mere baal bade hue the (I had grown my hair with such difficulty). But I had to.

Also, Sonakshi had this thing for her dad's moustache. Agar dekoge, toh kahi kahi mein mucche aisi hi hai (If you see, my moustache looks similar in some places).

'Under all that weight, we knew Sonakshi was a very good looking girl' 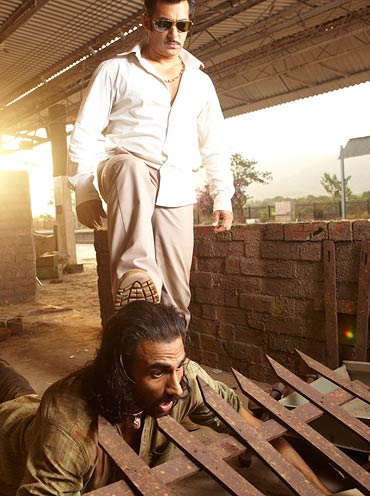 Speaking of Sonakshi, what made you cast her in the film? Word is that you saw her years ago and told her that she just apt for acting.

Yes. When I saw her, she was quite plump. But under all that weight, we knew that there was a very good looking girl, who could emote well. The kind of expressions she gave, it was obvious that she was meant for acting. And she could dance very well too.

Was it your decision to cast her?

Yes. But she needed to be convinced. So we spoke to her father and convinced her together. She wasn't interested in acting. Even now, she is not interested and doesn't want to pursue it.

When she heard the script and read the dialogues, the assistant director said she was ready to perform. And, of course, she can dance very well.

The advantage with Sonakshi is wherever she goes, she will still be family because of her father and his relationship with the people in the industry.

You have danced well too.

[Laughs out loud] The dance in this film is dedicated to all those who cannot dance! Ek night club ka dancing hota hai, ek function ka dancing hota hai, ek dance hota hai jahan log full tun peeke having fun... (there is a night club dance, a dance at a function, a dance where people are drunk and having fun) So these kinds of dance are for those who cannot dance.

'My next films are not out and out action films' 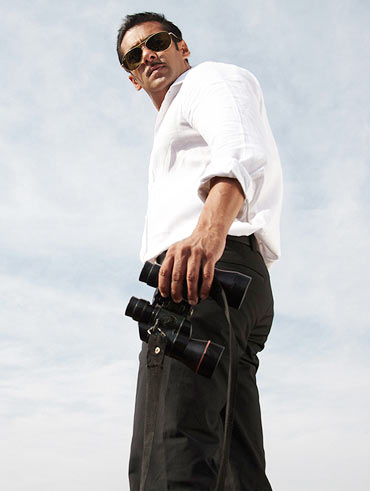 Your one-liners became very popular in Wanted. In Dabangg, too, they sound interesting.

What is it with the dialogue Oye Kaalia, kitne aadmi the? They are just dialogues, it's just the way it is said.

Yeh minister bada lafander hai. Lafander se yaad aaya, aapne ab tak apna taarif nai karaya humse (this minister is such a scoundrel. Speaking of a scoundrel, you haven't introduced yourself to me.)

Haraamzade, yeh kitaab kidar hai. Haraamazade se yaad aaya, aapke aadarniya pitaji kaise hai. (son of a b****, where is my book. That reminds me, how is your esteemed father?)

Yeh ladki bahut kamini hai. Kamini se yaad aaya, aapki patni kaisi hai aaj kal (this girl is a b****. That reminds me, how is your wife doing these days?)

You seem to have a fetish for playing a cop. You played one in Wanted, and now in Dabangg.

That's may be because my grandfather was the DIG (Deputy Inspector General) of Police. Also, I have had a very long relationship with cops [smirks].

You're doing a lot of action films lately like Wanted, Veer and now Dabangg. What is drawing you to them?

'David Dhawan and I are working on Partner 2' 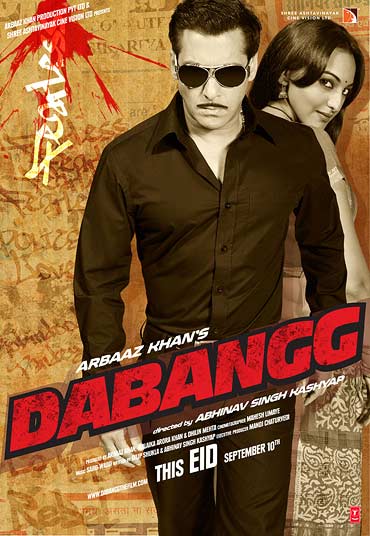 What do you mean by heroism?

Anything that is larger than life. Things that we want to do but cannot do them.

Is that why you prefer these films to more realistic ones like Main Aur Mrs Khanna?

Main Aur Mrs Khanna was a sweet film that people should watch at home. Bigger films like London Dreams, Veer and Wanted need to be watched on the big screen. It is the same funda like the Hollywood films like Rambo, Die Hard and Jurassic Park. Their DVD sales were more than theatre sales.

It's been a long time since you did a film with David Dhawan.

We are working on Partner 2. We have decided on the script and will start shooting soon.

You are getting into production too?

I want to produce films where the common man is the hero. I want to give new actors a chance.

Wanted released during Eid and did well. Now, Dabangg will release at the same time.

Any festival is a good time to release a film. Eid is a time of celebrations. So they won't hesitate to spend a little extra money and watch a movie with family and friends. And if the film is right, then it's sone pe suhaga (icing on the cake). I believe films should release when people have nothing to do.