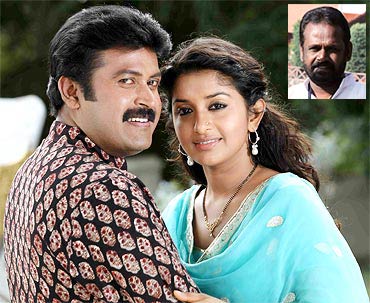 Image: A scene from Pattinte Palazhi
Meghna George in Kochi

Director Rajiv Anchal believes in experimenting with different themes. With films like Butterflies, Kashmeeram, Guru and Made in USA among others, he has handled various subjects that have attracted the viewers.

In his latest Malayalam venture, Pattinte Palazhi, Meera Jasmine plays the lead character of a wannabe singer, who has to go through several hurdles in her life.

Manoj K Jayan, Revathy, Jagathy Sreekumar, Nedumudi Venu and Jagadeesh include the film's cast. The cinematographer is Azhagappan and the music is by Dr Suresh Manimala.

Rajiv talks to rediff.com about Pattinte Palazhi, which is perhaps the most notable Onam release in Malayalam.

Do you think Pattinte Palazhi has got the right platform with not many big budget superstar films getting released during this Onam season?

[Smiles] Of course, I think Pattinte Palazhi will be accepted by the viewers. I do keep a certain gap between my films and try to explore newer subjects. I have always been careful not to get stereotyped. I have felt that we don't have enough heroes who are trying to experiment with new themes or they really care about choosing exciting subjects.

'There were no so-called stars during the 70s and 80s' 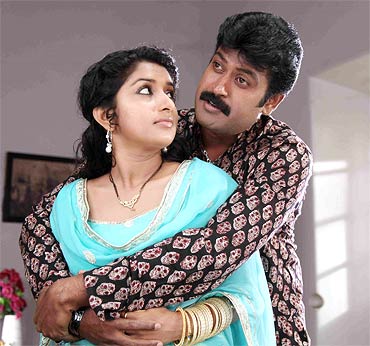 Is that the reason why you haven't done many films?

I believe that actors have to be good tools at the hands of filmmakers at times and actually it is a sharing process, where the talents of both -- the filmmaker and the actor -- work in tandem. There were no so-called stars during the 70s and 80s when great films were being made in Malayalam. Of course, there were some but they were in a very high level aesthetically.

There was this aesthetic combination that existed then. But now it has become just business oriented. In the existing scheme of things, the options are either to wait for the stars or to go according to their diktats, and I wasn't comfortable with either of them. So I decided to go for another formula where I thought a talented female could be used. I was on the lookout for such a story.

But strong female characters used to be the strength of Malayalam films at one point...

Exactly. Nowadays no one is perhaps thinking on such lines. May be it is because of the situation existing here with marketing a film, serious thinking is not going into it. 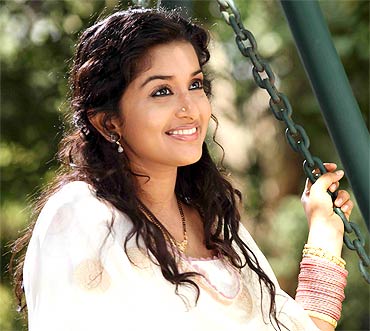 Do you feel that our films have become more profit-ridden of late?

That is true. There is no sincerity to the medium or to the society and that is being reflected now. Now the efforts are to exploit society. Such an attitude is dangerous.

The story is being narrated with music as the backdrop. Music is all around us and we can sense the rhythm. It is about a girl called Veena, played by Meera Jasmine, who wanted to become a singer. Later several tragedies happen in her life.

Was Meera Jasmine a natural choice for the role because there aren't many actors around who can portray characters the way she does?

Meera was the in fact the only choice. This was a strong character which only she can do in Malayalam. She liked the role and accepted it.

Do you think our viewers become prejudiced considering the fact that smaller films find the going tough at the theatres these days?

It is the filmmakers who should instill the liking in the minds of the viewers. Not many are thinking about giving a different experience with their films. So there is no point in blaming the viewers.