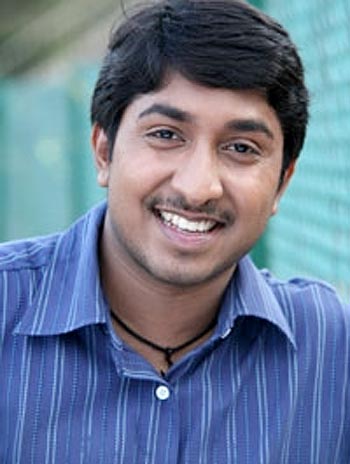 The pooja of director Rajesh Pillai's Traffic, scripted by Bobby and Sanjay, was held at Hotel Avenue Centre on August 17.

The shooting will start in early September in Kochi. The story talks about the journeys of a few on a fateful day. They were strangers when it all began, but soon their lives intertwine in a curious way.

Rajesh Pillai has earlier directed Hridayathil Sookshikkan with Kunchacko Boban and Bhavana in the lead.

The duo of Bobby and Sanjay have scripted hugely successful films like Ente Veedu Appoontem and Note Book. 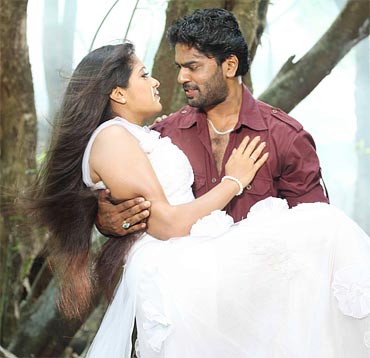 Image: A scene from Yakshiyum Njanum

Controversial director Vinayan, who is in loggerheads with almost the entire Malayalam film industry, has managed to release his film Yakshiyum Njanum as one of the Onam releases.

The film has fresh faces in the lead, along with a few experienced actors like Thilakan, Mala Aravindan and Sphadikam George.

Vinayan says that "though Yakshiyum Njanum is my 32nd film, I am happy as if it was my 300th film, as I had to struggle against so many pressures and opposition this time."

Late actor Rajan P Dev's son Jubil Raj plays one of the leads in the film.

Vinayan has emerged successful earlier also against all odds and Malayalam film industry is looking forward to the box office show of his latest venture. 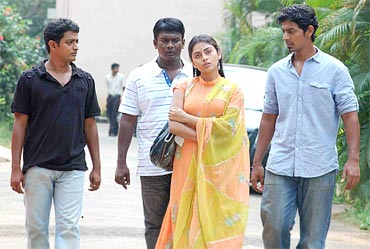 The film is slated to hit the theatres on Aug 23, on Thiruonam.

Govindankutty also plays one of the heroes with two new faces. Dhanya Mary Varghese is the heroine.

According to the actor-director, 3 Char Sau Bees narrates the story of three engineering college students from modest backgrounds, who try to lead a lavish life. The film is about their escapades and the director reminds that though it is being narrated in a humorous way, the story has a serious tone.