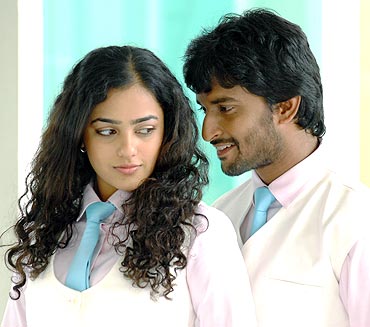 Image: A scene from Ala Modalaindi
Radhika Rajamani in Hyderabad

The Telugu film, Ala Modalindi (It all started like that) seems interesting on a few grounds.

Firstly, it's directed by a woman director -- rare in the Telugu film industry -- Nandini Reddy. The title too sounds intriguing.

Ashish Vidayarthi plays an important role in it. Nithya Menon makes her debut in Telugu with this film. It stars Nani who is slowly establishing himself in the Telugu industry.

So going on the sets of the film seemed quite a good experience despite the sweltering heat. 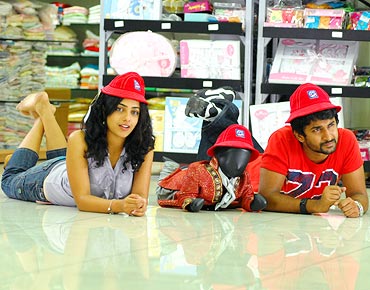 As one entered the sprawling Rama Naidu studios at Nanakramguda, both Nithya Menon and Ashish Vidyarthi were involved in the shots of the climax scene.

Then, Nani too stepped into the frame along with Nithya and Ashish (who had had arrived from Mumbai the night before for the day's shoot).

In between the shots, Ashish spoke about the film. "The film has a fresh approach, one of the feel-wonderful films which goes beyond the typical formula 38 kind of films. It's interesting, and Nandini is approaching it in a fresh way. I come as an interesting part in the film," he says.

Nandini adds, "Ashish's character has an interesting twist to it and it is something we haven't seen him play before." 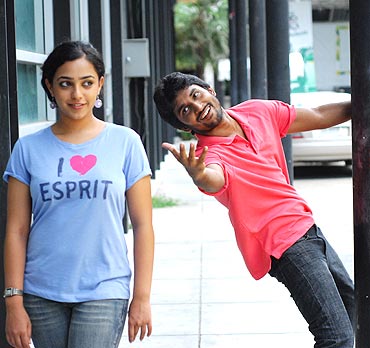 Debutante Nithya Menon braved a bad attack of sinusitis to carry on with the shoot.

"Nandini is the reason why I am doing this film. She called me and spoke to me. We became friends eventually. Acting in films was not my final destination. One day I want to make different films and travel around the world. Let me see how far I can go," says the petite actor who did her first film (in Malayalam) with Mohanlal.

"This film Akasha Gopuram shot with an international crew in UK was done when I was on a vacation."

Regarding Ala Modalaindi, Nithya says, "I wouldn't say 'yes' if it wasn't a great script. I am inclined to do serious films as I like to work on something intense. Nandini's film is funny and light-hearted. It was a different approach to a love story. She has the taste and it has been like a home production. Nandu (Nandini) and Nani became close friends and we used to hang around, chill and eat together. We used to exchange ideas and it was like working with family." 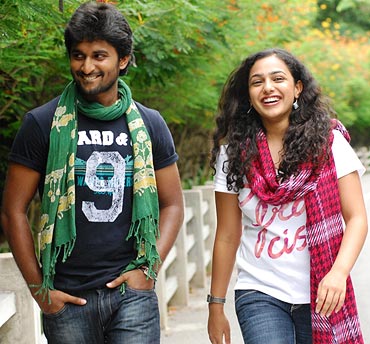 Nandini is very enthusiastic about Ala Modalaindi:

"The USP of the film is the freshness of the screenplay. One will get to hear a new Kalyani Malik (music director) in this film as he had tried to create a different sound than what is heard in Telugu.

"The film promises a joyful ride for the audience with an interesting twist.  It's an absolutely fun-packed family film which can be picked up even on a rainy day and watched more than once.

"It was a great pleasure to work with Rohini who is back on the Telugu screen after a long time and it will be a pleasant surprise."