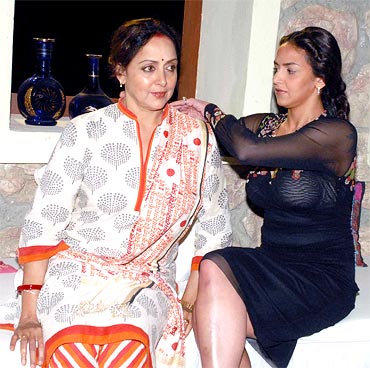 Film sets are usually very noisy, brought into some sort of order by the strong voice of the director. But on the sets of Tell Me O Khuda, we hear the soft voice of Hema Malini giving instructions.

Tell Me O Khuda will see the actress return to the director's chair after many years. The film -- intended to revive daughter Esha Deol's career was initially directed by Mayur Puri. But Hema Malini was not happy with the film's rushes, and she sacked the director.

The film tells the story of a girl, who sets out on a journey to search for her father. It seems to bear some similarity to Hema Malini's directorial debut Dil Aashna Hai, where Divya Bharati was in search of her mother, along with Shah Rukh Khan.

When we went on the sets of the film last week, Hema Malini was re-shooting scenes that had been shot for 20 days in Turkey. A replica of those sets was erected in Film City, in the western suburb of Goregaon, Mumbai, to suit Hema's style.

It was a crucial scene in which Esha, Arjan and Chandan were confronting Rishi Kapoor. Turkish actress Meltem Cumbul was present on the sets even though she wasn't required for the scene. 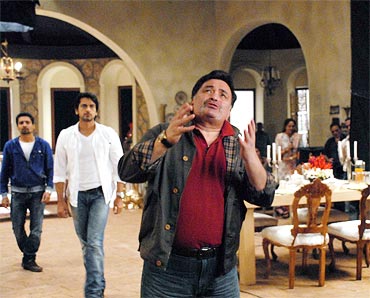 "Really? Has it been that long?" Esha asked. "You're saying it is a comeback film but I don't think so. But now, you will see more and more of me, as my film will release soon."

Esha plays Tanya, a writer who inspires young girls. Everything goes well in her life until she realises something is missing from her life: her father. She then goes on a journey to search for him.

"It is a pleasure to be directed by my mom," Esha continues. "I have worked with many directors but none of them have been actors. Mom is an actor so she gives me tips constantly. Plus, she knows exactly how my face should be angled, so that's a bonus."

But her mother is a tough taskmaster, Esha adds, and does not leave anyone until she gets what she wants. "It was a memorable and funny experience. Mom and I would break into Tamil on the sets during the shoot, if something went wrong. No one understands Tamil so the cameraman and others would ask us to talk in Hindi or English," Esha adds. 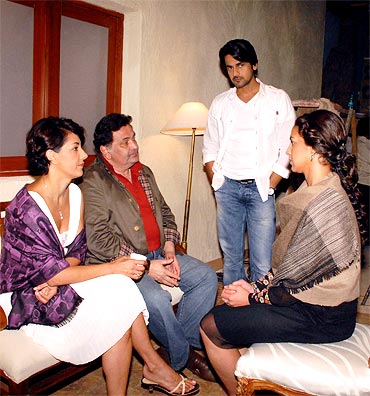 This is the first time my father and I have managed to come together in front of the camera," Esha says. "Ahana and I share a warm relationship with him. My father is an emotional person and I am a bit stronger. But in one of the scenes, both of us got emotional and broke down."

So how did Hema Malini convince husband Dharmendra to be a part of the film?  "I was very hesitant to ask him to act in my film," Hema Malini replies. "But when Esha asked him, he immediately said yes."

Most of the actor's scenes have been already shot before. "(But) if he comes to re-shoot the scenes, I will tell him to direct himself because he will not listen to me," the actress says coyly. 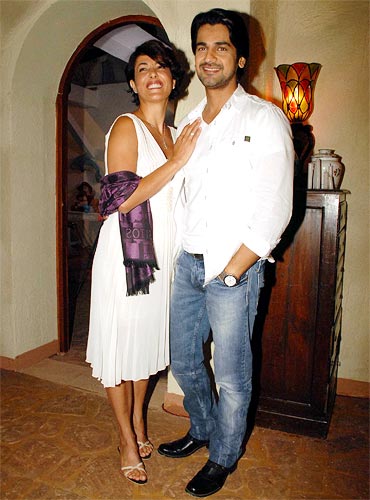 The most difficult scene was a camel race, when I had to ride a camel in Rajasthan," Esha says. "I was totally bruised."
Chandan Roy Sanyal, who was last seen in the role of Mikhail in Kaminey, agrees. "Yes, that was the worst thing. I don't think I will ever do a film with a camel in it again!"

So what made him want to be a part of this film? "I wanted to do something different. I wanted to show people my range as an actor," he explains. "Kaminey was an action film, and my character was over the top. But Tell me O Khuda is a comedy. It is different from my earlier role." 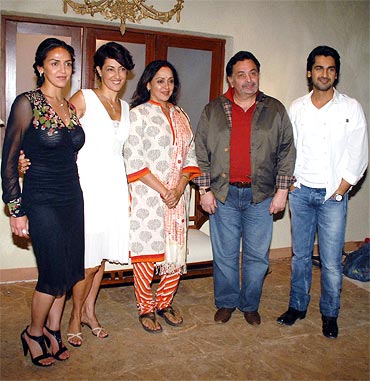 Arjan Bajwa, who played Priyanka Chopra's boyfriend in Fashion, plays a fashion photographer in this film.
"I feel honoured working with Hemaji. She is directing a film after 16 years," he says. "She had first worked with Shah Rukh Khan, who went on to become a superstar. Today, it is me."

But the most memorable moment of shooting for this young actor was shooting with Dharmendra. "I spoke to him in Punjabi," Bajwa grins. "He knows my father, so we caught up."

Arjan claimed that he had a crush on Bollywood's Dream Girl, Hema Malini, as a child, "I don't feel scared of her. As a kid, I was a huge fan of Hemaji. I would watch the song Mere Naseeb Main Tu Hain Ke Nahin from Naseeb everyday after coming home from school. She dances really well in that song," he says.

Chandan, on the other hand, says honestly that he never had a crush on Hema Malini. "But I have liked Hemaji in the movies like Kitaab and Kushboo."

Will Tell Me O Khuda be Esha's big ticket to success? Let's wait and watch.