Why SRK wears clean socks all the time!

Six months after he was detained for two hours for questioning at the Newark Liberty International Airport, Shah Rukh Khan returned to the New York-tristate area on Monday to ring the opening bell at NASDAQ, the world's largest exchange company that delivers trading, exchange technology and public company services across the globe.

Shah Rukh and his co-star and Kajol in the film, My Name Is Khan, became the first Indian actors to ring the bell. The movie's director Karan Johar, who Shah Rukh said is spending sleepless nights in Mumbai giving the final touches to the film, could not be there for the historic occasion.

"It was an honour to India and not just to us but we are nevertheless very happy that Fox Searchlight (which is distributing My Name Is Khan worldwide) made it happen," Shah Rukh said.

Dozens of movie fans turned up for the event, waiting outside the Times Square NASDAQ area to catch a glimpse of Kajol and Shah Rukh.

The stock exchange bell is rung in the morning and the evening. Busness leaders across the world, statesmen, head of governments and leaders of organisations fighting cancer or any other life-threatening disease are invited for the honour. India's Consul General in New York Prabhu Dayal, for instance, has rung the closing bell at the exchange, which lists seven Indian companies with a market capitalisation of $35 billion.

'I had never been anywhere near a stock exchange till today' 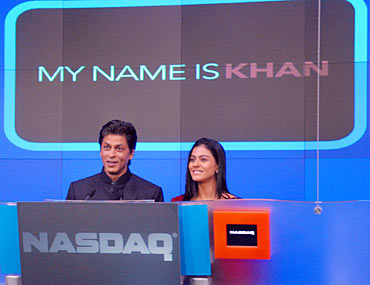 The stars spent two days in New York to promote the film, which opens on February 12 worldwide. They would be visiting several cities, including Berlin, where it premieres at the film festival.

"I had never been anywhere near a stock exchange till today," Shah Rukh said. "Frankly, I didn't have a full idea of how it looked like in America."

He said NASDAQ officials went out of their way to make them comfortable and enjoy the experience. Shah Rukh said he was thrilled when he saw the images of the opening on a huge billboard at Times Square. Within an hour, they were at the Fox building on the Sixth Avenue to attend a press conference.

"We sorely missed Karan," he said. "He made all this happen. "This is an amazing, intense film and he should have had fun with us watching all this happen in New York."

Kajol said Karan would have also enjoyed the glamorous aspect of the event. "He is a down-to-earth man," she said, "But he likes glamour too."

My Name Is Khan begins with the child, Rizwan Khan (Tanay Chheda) who has the Asperger syndrome, growing up with his mother (Zarina Wahab) in Mumbai. Later, as an adult, (Shah Rukh), he moves to San Francisco. While there, he falls in love with Mandira (Kajol) and marries her. But the 9/11 events force them into unforeseen problems and a separation ensues. Rizwan has to risk many things in his effort to get back his wife.

'I have been detained over 25 times' 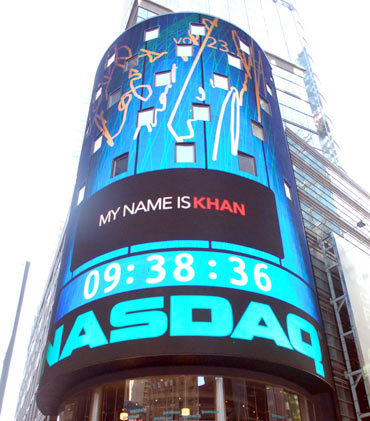 Image: The exterior of the NASDAQ building

Though much of the film has been shot in San Francisco and Los Angeles, Shah Rukh said New York made him feel very much at home, though he could not think of any city as likeable as Mumbai.

Later, addressing a press conference, Shah Rukh answered a question about his detention saying that being detained at airports is nothing new to him.

"I have been detained over 25 times," he said, in countries like America, France and the UK. Even his children have been detained. But the Newark incident went out of 'out of proportion' because he had called the Indian consulate for help. Now, he looks at the incident without any anger.

He has also learned over the years to wear clean socks all the time, he said with a grin, because like other passengers he  has to remove his shoes at the airport security as well. Every country has its own regulations at the borders and airports. He said he understands the situation, and has no reason to defy or question it.