"We are Siamese twins," says Shah Rukh Khan grinning widely and looking at Kajol. "We separated ourselves only for this press conference."

We are at the New York headquarters of Fox Searchlight, the worldwide distributors of Shah Rukh and Kajol's new film, My Name Is Khan. It is the first time Fox Searchlight is distributing a Hindi film.

The buzz for My Name Is Khan is strong and it would be a major disappointment if it does not do at least half of the $10 million the record setting 3 Idiots has grossed in North America and the United Kingdom.

The film, dealing with a man who is fighting a kind of autism, is directed by Karan Johar. The SRK-KJo team have earlier made blockbusters like Kuch Kuch Hota Hai and Kabhi Khushi Kabhie Gham.

Shah Rukh says Kajol, who has shared the screen with him in such mega hits as K3G, Dilwale Dulhania Le Jayenge and Baazigar, is such a honest and close friend that she roots for Johar and Shah Rukh more than herself.

There have been occasions, he says, when a certain shot is okayed by Johar but Kajol would say, 'I think SRK can do better.'

'Whenever I do a film, I want Kajol to be in it' 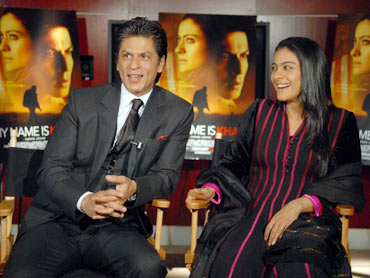 Shah Rukh has extraordinary chemistry with Kajol. Kajol, in turn, shares a great comfort level with him.

"Whenever I do a film, I want Kajol to be in it," SRK says. "I always want her to be the best in any film." The feelings and respect he has for her "exist only for Kajol."

If you thought My Name Is Khan is a film about 9/11 or terrorism or that it has similarities to Yash Raj Film's New York, you better rush to see it and clear your doubts, Shah Rukh Khan says.

At a New York press conference attended by over 60 journalists and photographers, Shah Rukh, aided by his co-star, not only kept the event humorous but also provided a lot of insights into the movie.

The film's director, Karan Johar was held back in Mumbai in post production work for the film's February 12 release. 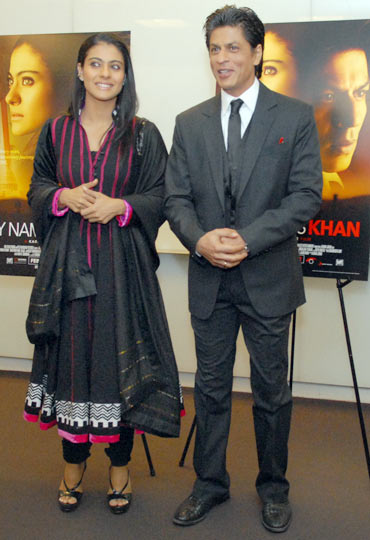 Shah Rukh, who is also a partner in the film's production with Johar said 9/11 merely provided a background for a tumultuous love story.

The movie is not so much about terrorism but about the humanity, how people can rise above their individualities and extend a helping hand, he said.

It was also a deeply etched love story in which a man forced by the events beyond his comprehension fights hard to regain his wife separated by circumstances beyond their control.

"It is basically a film that shows how love conquers all," he said, adding it also shows how certain calamitous events affect people across the world who are not at all connected to the events.

In a way, the film reflects Buddhist thoughts about forgiveness and goodness, Shah Rukh, who had produced the movie Asoka in 2001, continued.

He added that while My Name Is Khan is a bit intense compared to the 'happy-go-lucky life' seen in many films including those starring him, it had enough humanity and love story to appeal to people anywhere.

"It is not a youthful film," he said, his eyes twinkling. "Kajol is no longer 16." In the final reckoning, My Name Is Khan is about hope, happiness and humanity, he continued. "It is very important to give young people these thoughts without preaching to them," he said. "There is hope in humanity."

The film should also resonate with young people who are in danger of losing their faith in humanity, he added.

Kajol said that was very much on Johar's mind. "Somewhere down the line, some of us lose the faith in humanity," she mused. The film seeks to bolster the goodness that should rule every human being.

'Karan turned me into a three-year-old boy' The ringing sentence in the film's promos -- My Name is Khan and I am not a terrorist -- is a situational response to an emotional scene in the film and not a 9/11 response, Shah Rukh said, adding he would not want to give too much about the film away by explaining the situation.

He plays an immigrant living in San Francisco, who marries Mandira (Kajol). Their lives change dramatically following the 9/11 climate of misunderstandings and suspicion. Mandira always calls him Khan and not by his first name, Rizwan, he said.

Before Johar settled on the current title, he had considered it calling it simply Khan. He has all the films directed by him starting with K -- Kuch Kuch Hota Hai, K3G and Kabhi Alvida Naa Kehna -- Shah Rukh said but people connected with the production thought the one word title sounded like an action film, say Don.

There was no point in being superstitious about titles, Shah Rukh claimed. But even today some people ask him if My Name Is Khan is an action movie.

Shah Rukh also said he has been fascinated by various medical problems such as autism and curious about how people with mental problems looked at so-called normal people.

He also said several years ago he had given a book to Karan Johar about a three year old boy with Asperger syndrome, suggesting to Johar that he should make a film based on it. "Instead, he turned me into a three-year-old boy," he said chuckling.

'I am not a politician' 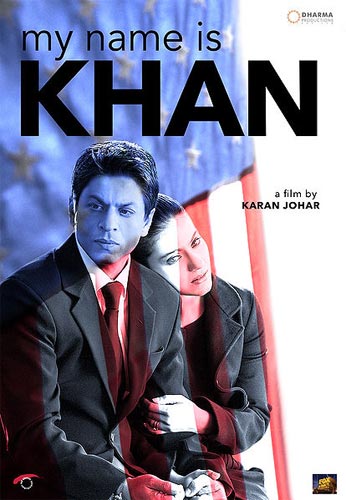 Image: A poster of My Name is Khan

Shah Rukh also talked about how his well meaning comments about Pakistani cricket players are used to build a controversy against him. But he says he is sticking to his words and sentiments which were said keeping in mind the Indian ethos and hospitality.

He said the protests against him in Mumbai led by Shiv Sena that has taken umbrage against his support for the Pakistani cricket players at the Indian Premier League was insensitive and undemocratic.

When he spoke about the Pakistani cricket team, he was speaking as an Indian who is taught to respect their guests, he continued.

"I am not a politician," he asserted. "I am just an actor. I am proud to be an Indian. I feel very sad, very depressed (by the reaction to his statements) but I stand by what I have said."