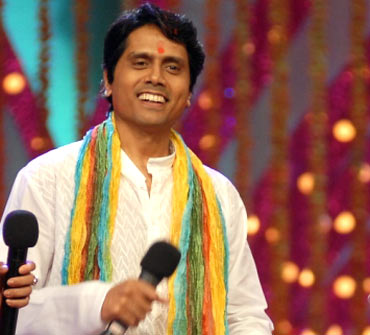 This Nagesh Kukunoor, he's thrown audiences into a tizzy. On the one hand he makes small, heartwarming films like Dor and Iqbal, and on the other he's making harebrained farces like Bombay To Bangkok.

His last film, 8x10, was recieved badly by audiences and critics alike, while another two -- Aashayein and Yeh Haunsla -- are currently languishing without a release date.

Not that any of this phases the director himself, enjoying not having to rush from one film to the other, and using up all his 'free time' to write more and more. By the time you read this, he should have 8-9 scripts lined up to choose a next project from.

Raja Sen caught up with Kukunoor at a coffee shop, and here are some excerpts from a long conversation:

Starting with the current films coming up, how's Yeh Haunsla turned out?

It's a very exciting film for me. I think stories that are inspired by true events, or life... to see stories like that brought to the screen excites me a lot. It happened with Dor, and it's happening with Yeh Haunsla.

The product is very different from the source but the core idea is the same. Very exciting. And somehow the milieu of Rajasthan is just... To be totally pretentious, directors make personal trilogies and so I've decided to make another film there and have my Rajasthan Trilogy. Maybe I'll transplant a story just in Rajasthan only to do the trilogy. (Laughs) Might work.

And what about Ashaayein? There's been a lot of speculation about The Bucket List, how that might have inspired this film...

It's more misinformed reporting. It has nothing to do with Bucket List. Aashayein is one of the scripts I wrote during the most introspective parts of my career. And it is about a guy who knows that he's faced with a very few days to live, and about what he chooses to do with that.

It's a million dollar question: what do you do when the universe as you know it comes crashing down? My spin on that was to use something I keep reminding myself, 'live life now.' We're notorious for planning. I ask myself, 'are you happy at this moment?' And if the answer's no, I try and find something to make me happy.

'The new audience knew me only by Iqbal and Dor' 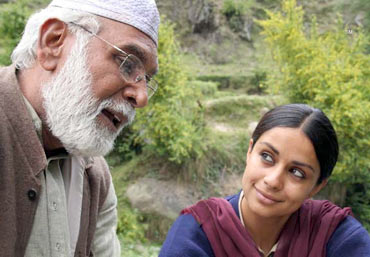 Image: A scene from Dor

Careerwise it's always been a more or less upward trajectory for you, but after Bombay To Bangkok and 8x10 Tasveer back to back, do you now feel the pressure to deliver a hit?

Yes. The one thing I have always been grateful -- and I can say this in capital letters -- for is the fact that I've had an extremely loyal audience. And I don't want to lose them.

What happened after Iqbal and Dor is that the audience base grew, a lot. And that's great, it means I can make more films, all that stuff. But the new audience knew me only by Iqbal and Dor, thinking that I make heartfelt human stories. Which is a nice space to be in, but I have always said I want to experiment with every movie, every genre.

Do you really think it's just because of perception and expectation that both films did so badly with both audiences and critics? Are you personally satisfied with both films?

Absolutely. When I finish a film, when I finally say that's it, I am satisfied. I will not take the easy way out and say, if the movie works, that I knew I had something magical in hand, and if it doesn't work, make excuses. Both films were done the way I wanted them. It is very much a perception problem.

For example, when I shot Bombay to Bangkok, my cinematographer Shudeep -- who I shot four films back to back with, a buddy of mine -- we were shooting a fart joke and he said 'isske liye toh joote padenge.' We were joking about it, and that's exactly what happened.

But I'm willing to do that! See, there are times when I'll sit and die laughing at American Pie and in the same breath I can sit and watch There Will Be Blood four times to see if Daniel Day Lewis did anything different. So I'm going to make films like that, ones that may work or don't work. 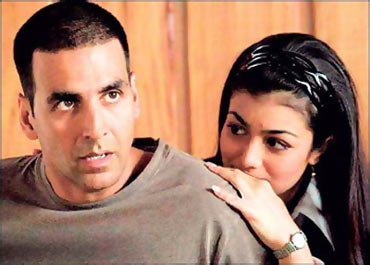 Image: A scene from 8X10 Tasveer

Has it been upsetting, this lack of acceptance? 8x10 specifically was a very big-budget film with a massive superstar.

Of course I felt bad. I kept telling everyone going to watch B2B to leave their minds outside the door, it's just a wacky romantic comedy. They didn't, and ended up furious.

But marketing aside, I'll say this clearly: the film was made my way. If you notice Akki's performance, it's markedly different from anything he's ever done.

In an interview ages ago, you'd told me about the star system and how it was harder to make your kind of films than make something with John Abraham on the poster. Now that you've made a film with John, and even with Akshay, how is your experience? Have the ones with the big faces on the poster been easier to make?

Aashayein was no different. It was still an independent film. John was there on the sets with me at 7am, we shot till 7, sometimes 10-11.

8x10 would have been no different, but our Canada schedule was a complete mess, because of the local line producers. The result was that we had Akki for 45 days and shot only for 17 days. So Akki, who is booked 365 days a year, sat out for 28 days! Then I spent the next year and 3 months playing catch up. So that movie would still have been part of my quote-unquote 'intimate filmmaking.'

But yes, it is a big film, with stunts and action. It's a big mainstream production. I'm okay with that. It's still all part of my filmmaking. It has my energy, my scenes.

So it's a good time to be Nagesh Kukunoor, then. You have scripts, you have budgets, and you get to make movies of all genres just the way you'd like them to be.

Yes and no. Because the bigger budgets still require actors. And when you say actors, you're talking about 8 guys. In the country that makes the most films, we're all trying to get the same guys. So you stand in a line and wait, and when you get their time you go and shoot the film. So that is unbelievably frustrating.